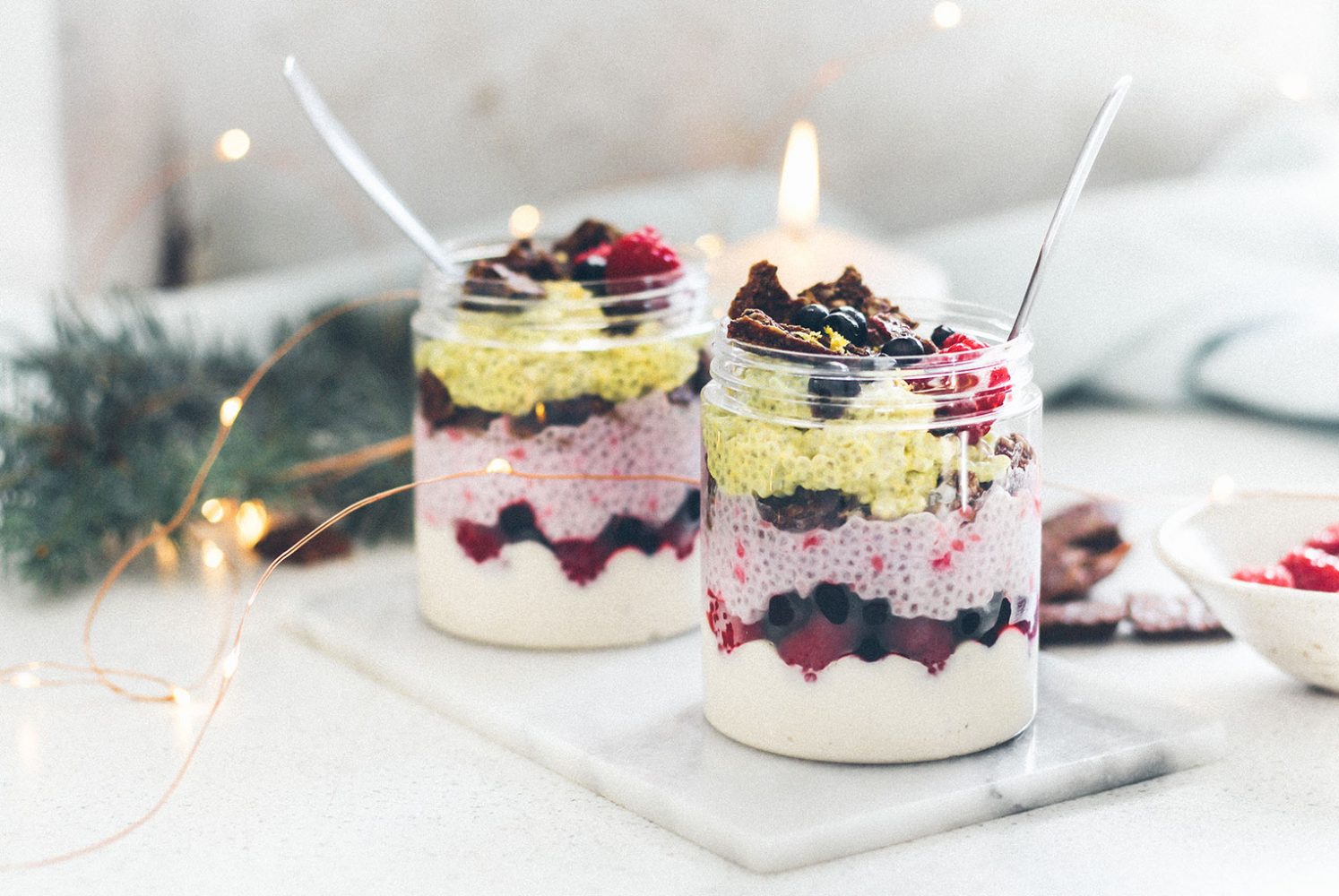 In at least one Mayan language, ‘chia’ means ‘strength’, perhaps because of the huge amounts of energy stored within these tiny seeds. In the past, the chia seeds were thought to grant almost supernatural talents. Today, they rank among some of the world's most nutritious foods. Discover the health benefits of chia seeds.

What are chia seeds?

Chia seeds come from a plant called Salvia hispanica, which originates in Central America, or Salvia columbariae which grows in Mexico and south-western US. Chia are tiny oval seeds with an impressive nutritional profile and benefits for your health.

The plethora of chia seed health benefits may be new to us, but this ingredient has built a name for itself since the times of the Aztecs.

First recorded by the Aztecs around the middle of the third millennia BC, chia seeds have been a staple food for people occupying the territory we today call Mexico. Between the years 1500 – 900 BC, chia was cultivated intensely and on a mass scale in Teotihuacan and by the people of Toltec culture. It would be consumed in either its full form, ground into a flour and used in baking, or used as a medicinal rub.

Some historians believe that chia also played a role in human sacrifice. However, the idea of widespread human sacrifice is today adamantly contested by many archaeologists leading the Mesoamerican field (see the work of Elizabeth Graham).

Living in the rugged and hot Sierra Madre’s copper canyon, Mexico’s Tarahumara tribe is world renowned for their long-distance runners. They incorporate chia into the diet through a drink made up of lemon juice, water and chia, which they call Iskiate. Legend has it that only after drinking Iskiate are the Tarahumara able to run for such great lengths.

The longest record the tribe holds for running without pause is a staggering 435 miles, equivalent to 16 back to back marathons. And, what’s even more impressive is this jaw-dropping feat took place in just over 48 hours!

The Tarahumara have lived in this hardy territory for around 500 years and their name comes from their ability to run further than almost any other population on earth, without shoes. Those opting to don footwear choose a minimal sandal made of either deerskin or discarded tire rubber. As a result, runners of the Tarahumara have little to no protection around their feet. 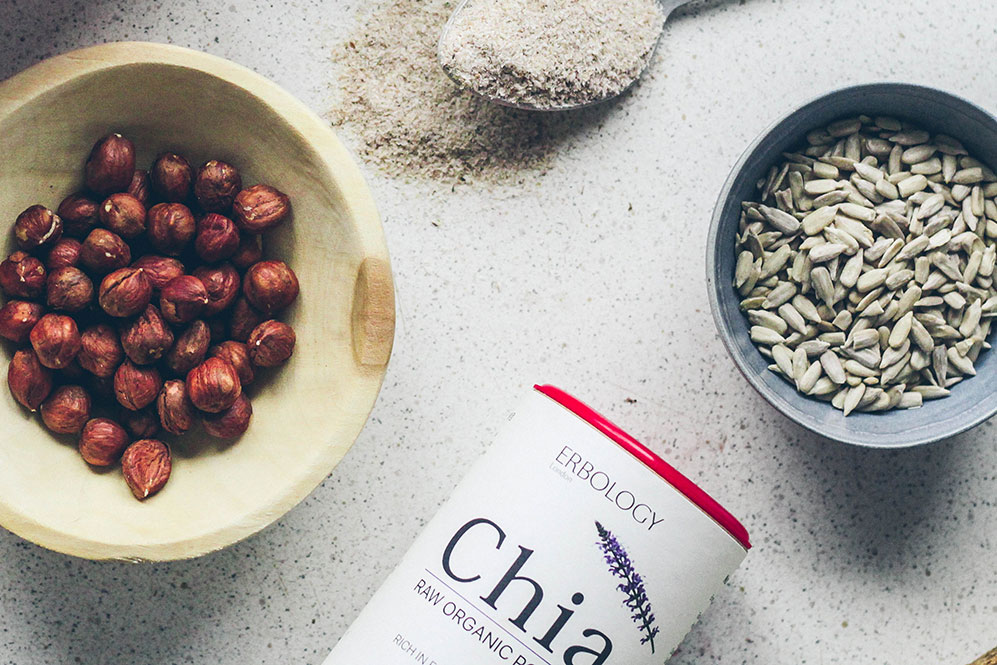 Could chia be the Tarahumara’s secret?

Much research has gone into the physical and cultural elements which set the Tarahumara apart from their neighbours. Researchers believe that because running is such an integral part of inter-village communication, and the only cultural form of athletic expression available to them, the Tarahumara have undergone physiological adaptations to allow them to run so far.

Others think that that the Tarahumara’s incredible endurance is based in their evolutionary history as hunters. Hundreds of thousands of years ago early hunter-gatherers pursued prey over extremely long distances.

Chasing animals until they died of heat exhaustion is a very specific form of hunting, called ‘persistence hunting’. The Tarahumara still practice it today. By chasing animals in a way that makes them gallop, you force their body temperature to spike. Mammals cool down by sweating and panting, but when quadrupeds gallop they are unable to pant. This leads to them overheating and slowing down, making them an easy catch for the hunter.

Other research has suggested that the Tarahumara’s diet might play a role. In particular, chia seeds!.

It may be just one or it may be a combination of all three of these reason, but it remains true that the Tarahumara possess extraordinary endurance. Whether this is down to chia seeds benefits is yet to be fully confirmed, but this magical little seed still holds an important role in the lives of these world-class athletes. 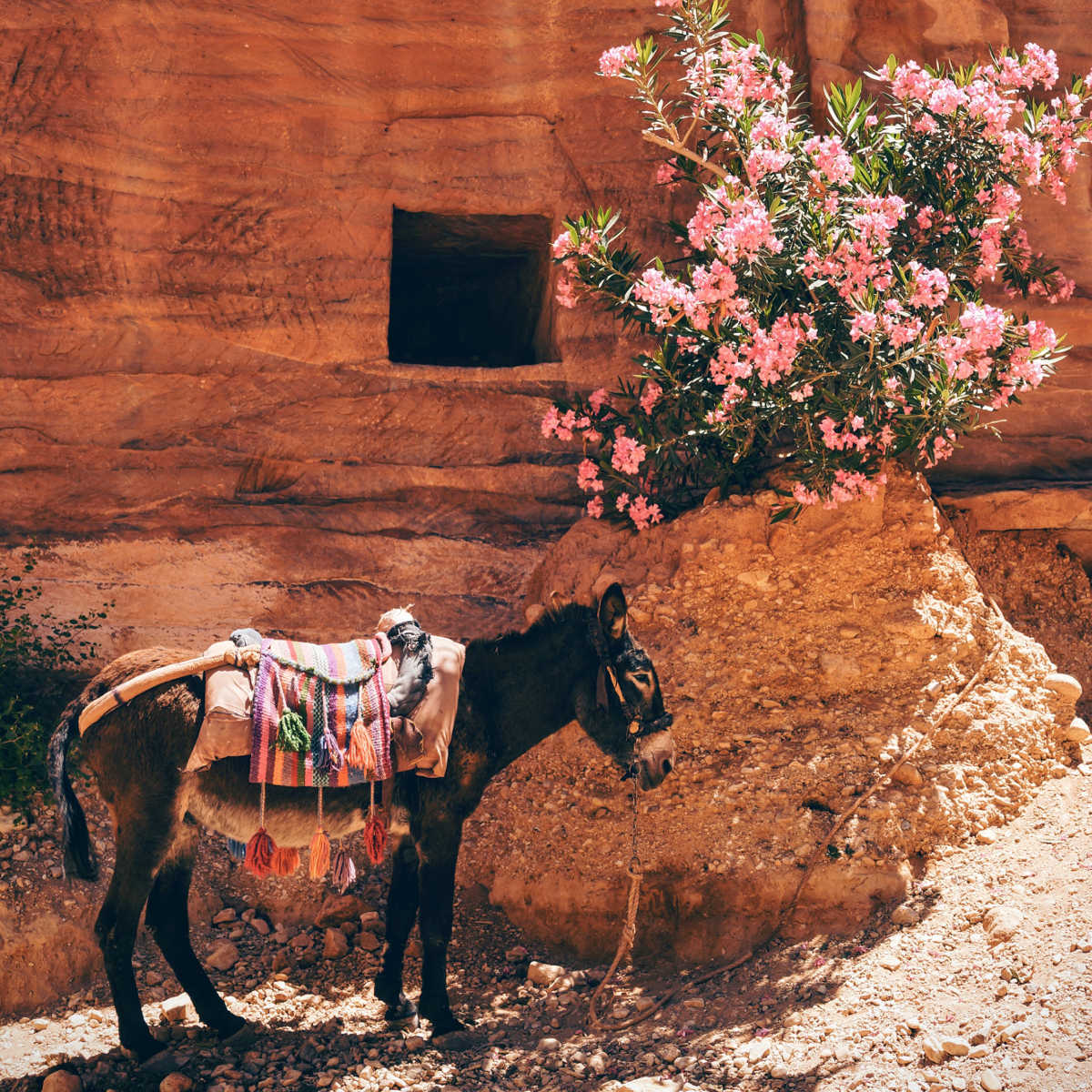 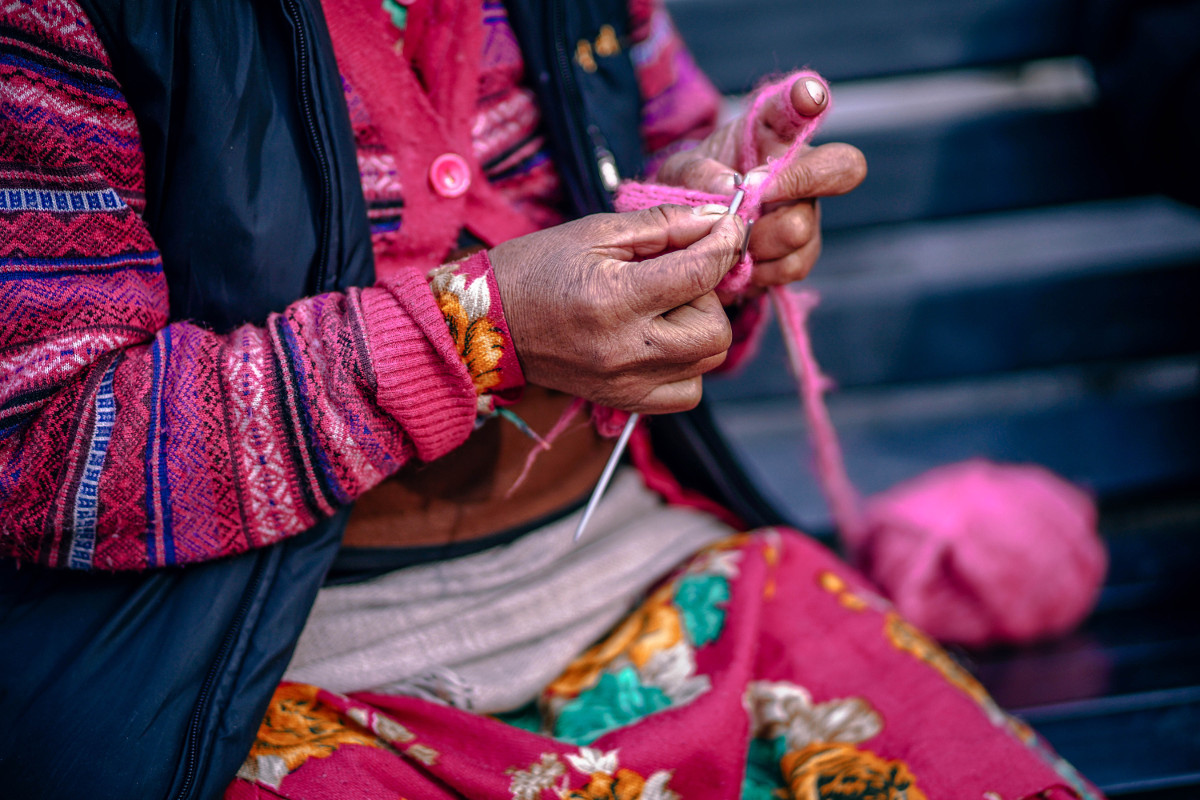 'The longest record the tribe holds for running without pause is a staggering 435 miles, equivalent to 16 back-to-back marathons.'

It is no wonder that chia seeds have long been a food staple. They pack a large amount of nutrients into their small size.

Most notably, these seeds are a great source of protein, fibre and omega-3 fatty acids. Chia seeds have been studied for their benefits on heart health and digestive system, as well as their ability to help build stronger bones and muscles. They may also promote skin health and reduce signs of ageing.

Chia seeds are a great source of soluble fibre. Less than two tablespoons (about one ounce) of chia boast over 10 grams of fibre (out of 12g of carbs).(1) If you found yourself alarmed by the amount of carbs – firstly read our article about common health myths – and secondly remember that not all carbs are created equal!

Fibre is a type of non-digestible carbohydrate that promotes gut health. Moreover, the high fibre content makes chia, along with flax and hemp, a natural blood sugar balancer.

Chia seeds are unique in that they absorb up to fifteen times their weight in water. In our stomach, the seeds expand and become a gel-like substance. This expansion can help us feel fuller, slow the passage of food through your system so nutrients can be better absorbed, and help with weight loss.(2)

Chia seeds are one of the best plant-based sources of omega-3s.

The same two tablespoon serving of chia contains 9 grams of fat. Five of those come from omega-3 unsaturated fatty acids. If we are simply looking gram for gram, chia appears to be a better source of omega-3s than salmon! However, it is important to distinguish the two as animal versus plant omega-3s are different. With chia seeds, we are getting alpha linolenic acid (ALA), which our body must convert into active forms to be useful.(8)

Chia seeds are rich in minerals.

Chia seeds boast an impressive amount of minerals, which are essential for your wellbeing. A two tablespoon serving of chia seeds provides nearly a third of the recommended daily amount (RDA) of manganese and magnesium, more than a quarter RDA phosphorus and nearly a fifth RDA calcium.(1)

Chia is a good source of protein.

A two tablespoon serving of chia provides 4.4 grams of protein.(1) With all nine essential amino acids, chia is considered a complete plant-based source of protein. Nevertheless, overall chia seeds rank relatively low in protein compared to other plants. Also, chia seeds only contain traces of lysine, an essential amino acid for the production of carnitine.(3) Carnitine is a compound responsible for converting fatty acids into energy and helping your body to lower cholesterol.(4)

In general, a good rule of thumb when partaking in a plant-based diet is to combine complementary sources of protein. A lot of times these are incomplete on their own, but when combined they can provide all the amino acids. Eating rice and beans in combination is a common example of complementary protein sources.(5) Amaranth is also an excellent source of protein.

To summarise, here are the five key health benefits of chia seeds:

Keen to try chia? Start with these wholesome foods

Our granola is 100% organic, raw, gluten-free and vegan. Alongside chia seeds, this wholesome breakfast cereal – or snack – is made with other impressive ingredients, such as tigernut tubers, nopales, and sprouted buckwheat, all excellent for gut health. Sweetened with apples and raisins, this granola does not contain any processed sugar.

Cold-pressed from organically grown chia seeds, this oil is an excellent source of omega-3 fatty acids and vitamin E. Vitamin E is a powerful antioxidant helps to protect your body cells from the damaging effects of the free radicals. Chia seed oil is a perfect addition to soups and pastas.

Made from ground organic chia seeds, raw chia powder is more easily digested by the stomach than whole seeds. Chia powder is ideal to add to smoothies, porridge and baked goods. 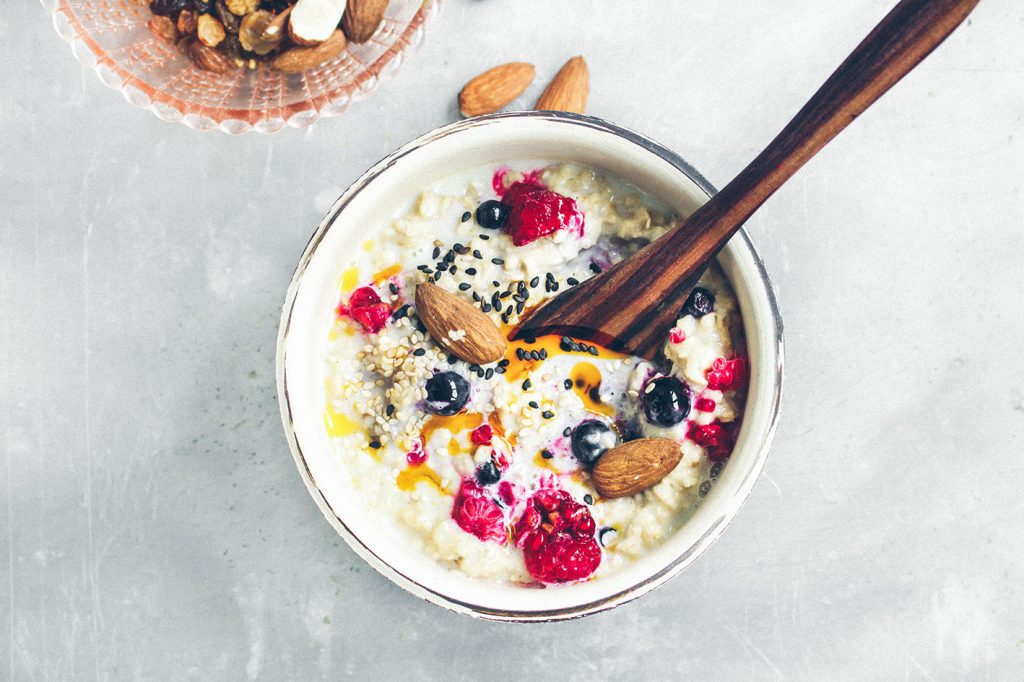 Start your morning with this wholesome Porridge with chia and apricot oil recipe. It will will keep you full for longer and fuel your body with nutrients and energy. 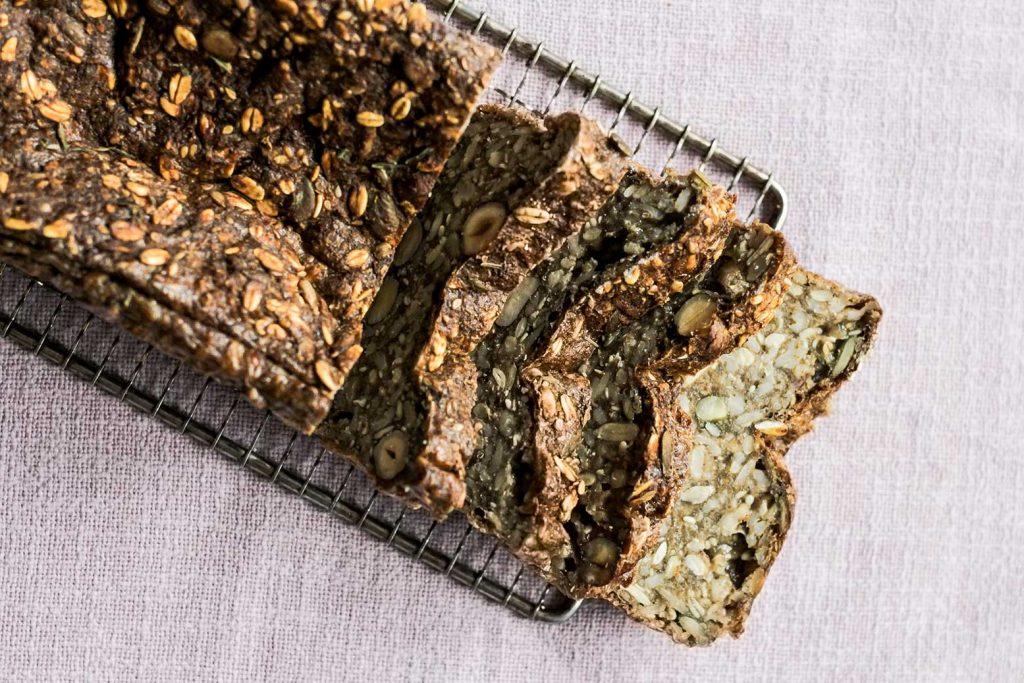 If you love baking, make this delicious Gluten-free nut bread with hemp and chia recipe. The combination of hazelnuts, pumpkin and sunflower seeds, as well as raw hemp and chia powders creates a beautiful earthy flavour that goes perfectly with this Velvet beetroot and aronia soup or Spiced carrot and ginger bisque. This is an excellent option for anyone with gluten intolerance. Moreover, this bread also aids digestion and nourishes your body with valuable minerals and plant-based protein. 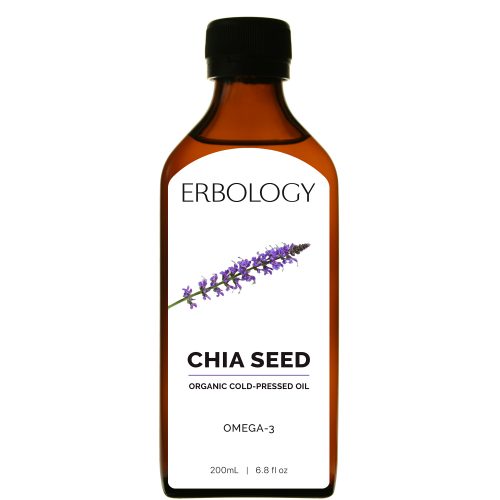 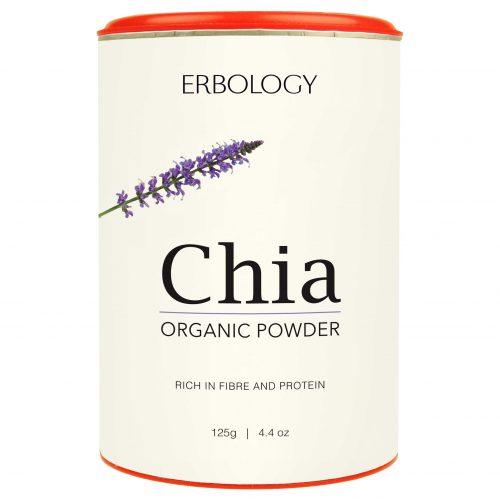 Despite being classed as a ‘pseudocereal’, buckwheat has very real benefits for your health! 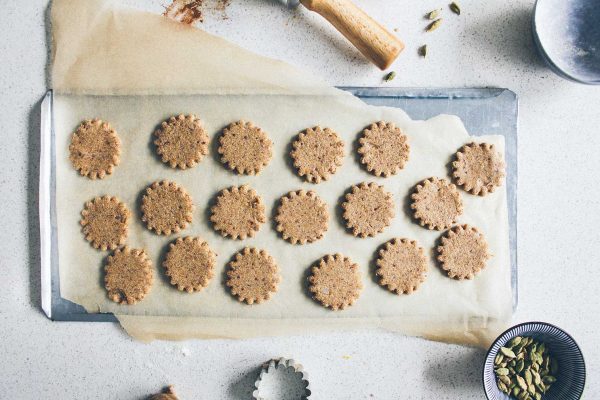 Make your friends and family something special this year with our very best recipes for vegan edible homemade gifts.

Lustrous, crinkly and deep purple, prunes look like gemstones unearthed from the rich soil of some far-flung and exotic place. Indeed, the humble… Continue