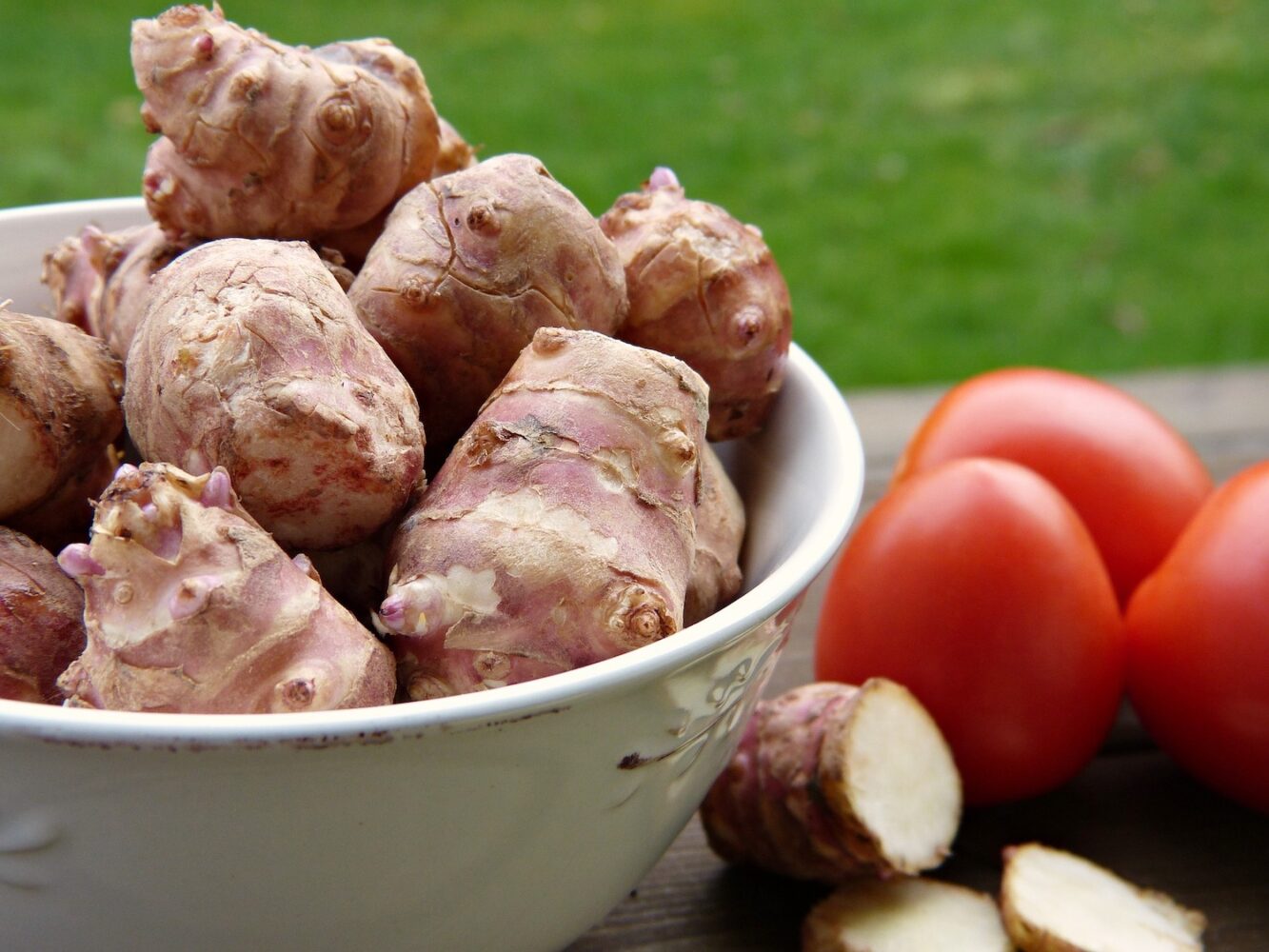 All about Jerusalem artichoke

The free-thinking Beat poet Allen Ginsberg once said, "We're all golden sunflowers inside." Adding Jerusalem artichoke to your diet might just be the way to make his words a reality...

What is Jerusalem artichoke?

The Jerusalem artichoke is also called sunchoke, sunroot, or earth apple. It is actually the edible tuber of a specific type of sunflower. Curiously, it is more similar in appearance to large, bulbous ginger roots than to the bright yellow of sunflowers.

Sunroot is naturally sweet and very good for you. Actively cultivated by Native Americans, these tubers were also eaten by early European settlers. The settlers sent Jerusalem artichoke back to Europe, where it soon became widespread. However, while cheerful yellow sunflowers will probably always be popular, their less photogenic roots fell out of fashion due to the rise of the potato.

Luckily, many people are now rediscovering the delights of Jerusalem artichoke, as well as all the health benefits it has to offer. The plant itself is also ready to make a comeback. Once planted, sunroots grow again and again over the years. They can even become invasive (amateur gardeners, take note!).

What are tubers, exactly?

It is easy to confuse tubers with roots, but tubers are defined by their nutritional value either to the plant itself or to us. The dictionary definition of a tuber is “a much thickened underground part of a stem or rhizome, e.g. in the potato, serving as a food reserve and bearing buds from which new plants arise.”

Other tubers that we regularly eat include yams, burdock, and salsify. Indeed, you can use Jerusalem artichoke in much the same way as you would use these tubers. They can also be prepared in many of the same ways as potatoes, parsnips, and other such vegetables.

We all know how incredibly versatile potatoes are, but sunchokes have a much more interesting flavour. They are tangy and pungent, like an artichoke heart crossed with a potato. They are delicious roasted, grilled, mashed, or as a base for a lovely soup. 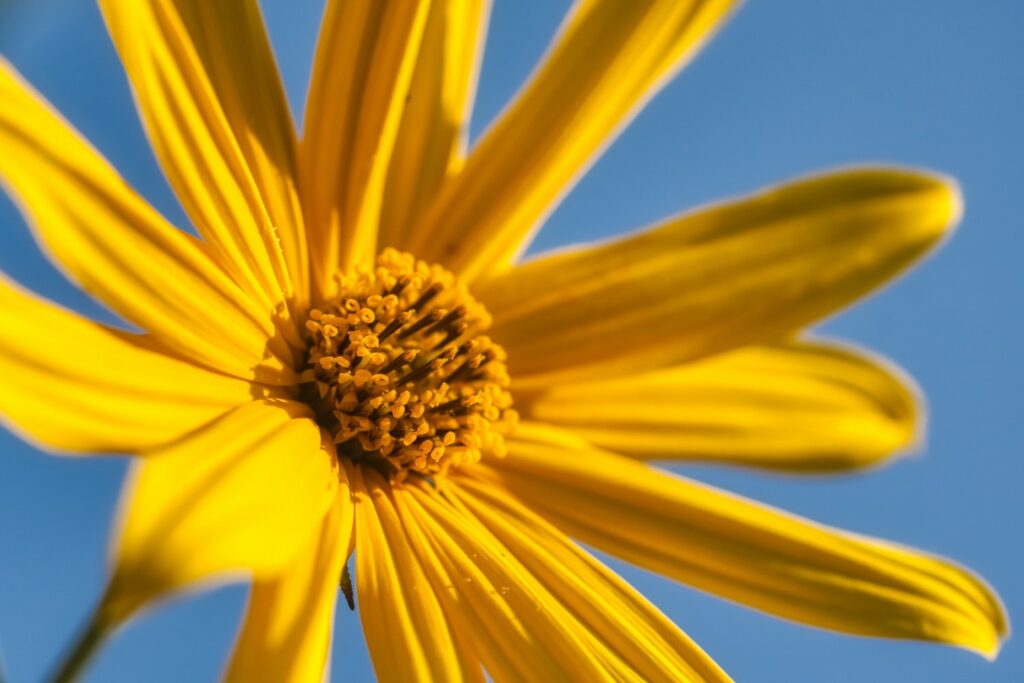 Despite the name, Jerusalem artichokes have very little to do with the artichoke – at least biologically speaking. The link comes from its flavour, which reminds some people of artichokes.

Samuel de Champlain, the French explorer and “Father of New France” who died in 1635, was the first person on record to note the similarity in taste.

Where the ‘Jerusalem’ part of the name comes from is more of a mystery. It might have been a mispronunciation of ‘girasole’, the Italian word for sunflower. Or, perhaps Puritan settlers in the New World christened the plant after the New Jerusalem they dreamt of creating. In any case, it’s rather poetic, and certainly beats the poor old potato when it comes to romantic names!

One major difference between the Jerusalem artichoke and the potato, though, is that Jerusalem artichokes can be eaten raw. You could grate them into a salad in a similar way to radish, for instance. The skins of sunchokes are edible and many people like the earthy flavour. However, like most tubers, the skins are often bobbly and uneven. They will need a bit of a tidy before you prepare them to eat.

Interestingly, the other name by which many people now know Jerusalem artichokes, sunchokes, only appeared in the 1960s.  Frieda Caplan, a Californian woman selling vegetables and fruits in bulk, came up with it in an effort to popularise the by then unknown vegetable.

Caplan also introduced fresh mushrooms, kiwi fruits (which she also named), and many other types of produce to American consumers. (If you are intrigued by this quietly revolutionary woman, check out ‘Fear No Fruit’, a documentary made about her life.) 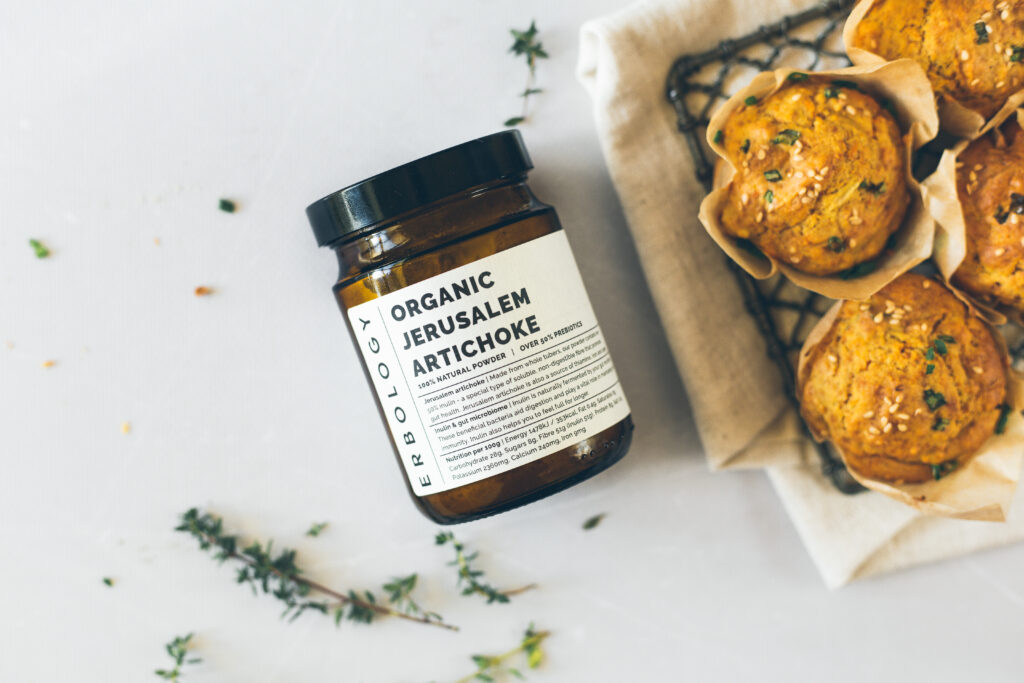 Inulin is a type of fibre contained in sunchokes. It is not digestible by our bodies, but is fermented by the beneficial bacteria living in our gut. This provides them with a nourishing meal, which is good news for us. Put simply, the more ‘good’ bacteria in your gut, the less room there is for disease-causing ‘bad’ bacteria. This effect qualifies inulin as a prebiotic, and it is very good for your digestive health.

While chowing down on inulin, your gut bacteria may produce gas which can result in bloating. Whether or not you experience this side effect depends both on your metabolism and the type of sunchoke you eat. So, if you’re concerned, we recommend introducing a small amount into your diet at a time.

Inulin is most likely to cause bloating when the sunchoke is eaten raw, so try cooked ones first. You might like to mix them with other vegetables too, so you can gradually observe how they affect you. If you have the time and inclination, cooking sunchokes for more than 12 hours at a temperature of 90°C / 194°F will bypass this side effect entirely. 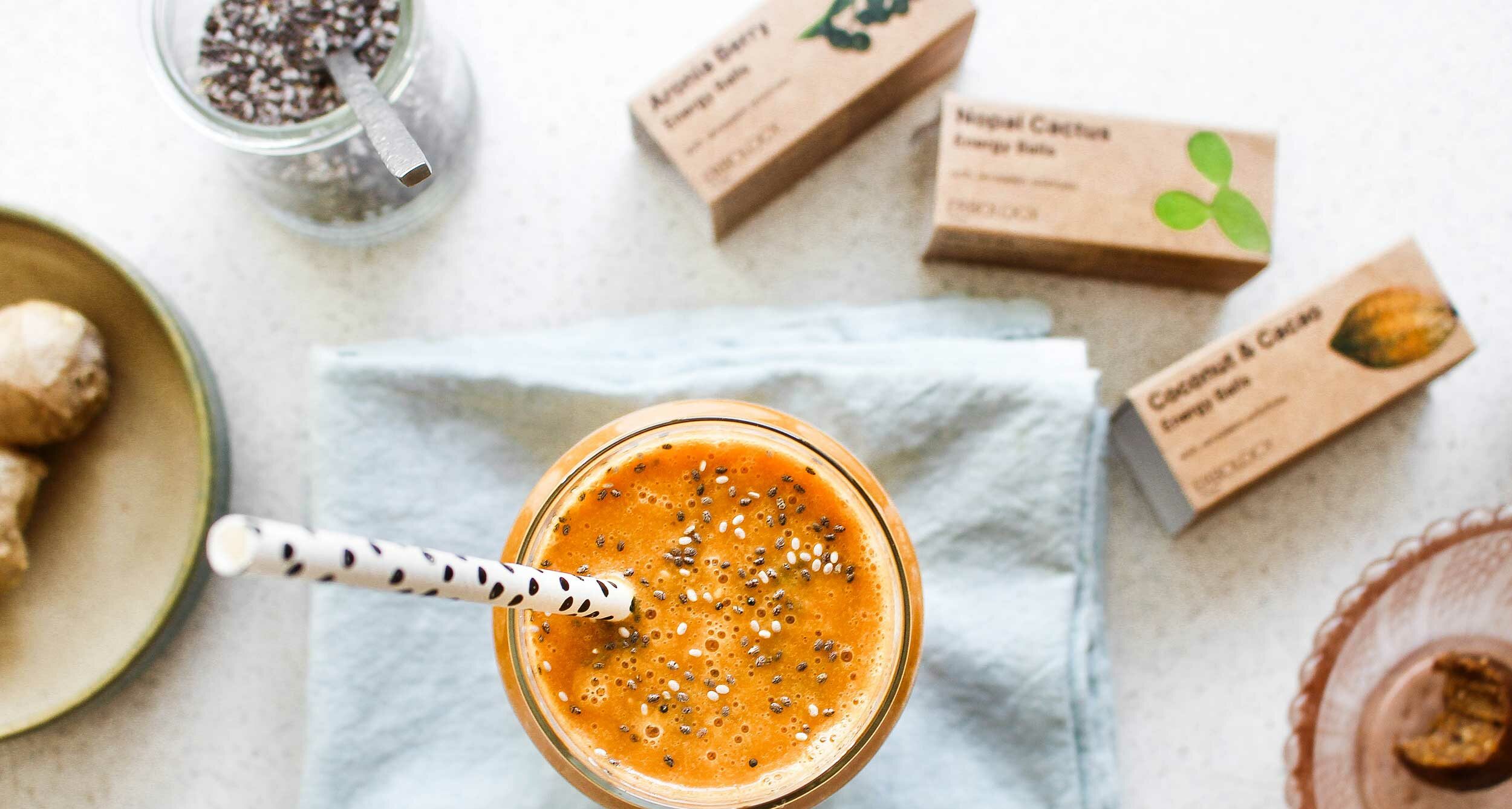 "As it is medium GI, Jerusalem artichoke won't result in any sudden energy spikes or crashes. Rather, it supplies you with a steady stream of energy throughout the day."

The addition of inulin to your diet is a major reason that we offer an Organic Jerusalem Artichoke Powder. This raw powder is not an extract and does not contain any additives or preservatives. Jerusalem artichoke is a medium GI food and is easy on your blood sugar levels, unlike other tubers (bad luck again, potato).

This unusual tuber has the added benefit of helping to stabilise your energy levels throughout the day. As it is medium GI, it won’t result in any sudden energy spikes or crashes. Rather, it supplies you with a steady stream of energy.

It is also a source of iron, which is needed to make healthy red blood cells and transport oxygen around the body. What’s more, it’s rich in the essential amino acids taurine, methionine, homocysteine and cysteine. Our bodies can’t produce these, so we must get them through our diet.

These amino acids help your connective tissue stay pliant. Connective tissue includes cartilage, blood, and bone and occupies the space between other types of tissue all over your body. Sulphur-containing amino acids such as these also support your liver in its all-important cleansing activities.(1)

Our sunroot powder is an easy addition to your daily meals. The light and slightly sweet flavour is a lovely match for smoothies, porridges, or yogurts, and likewise, for pasta or baked goods. It has a wonderfully crunchy texture that adds interest to the consistency of your favourite dishes. 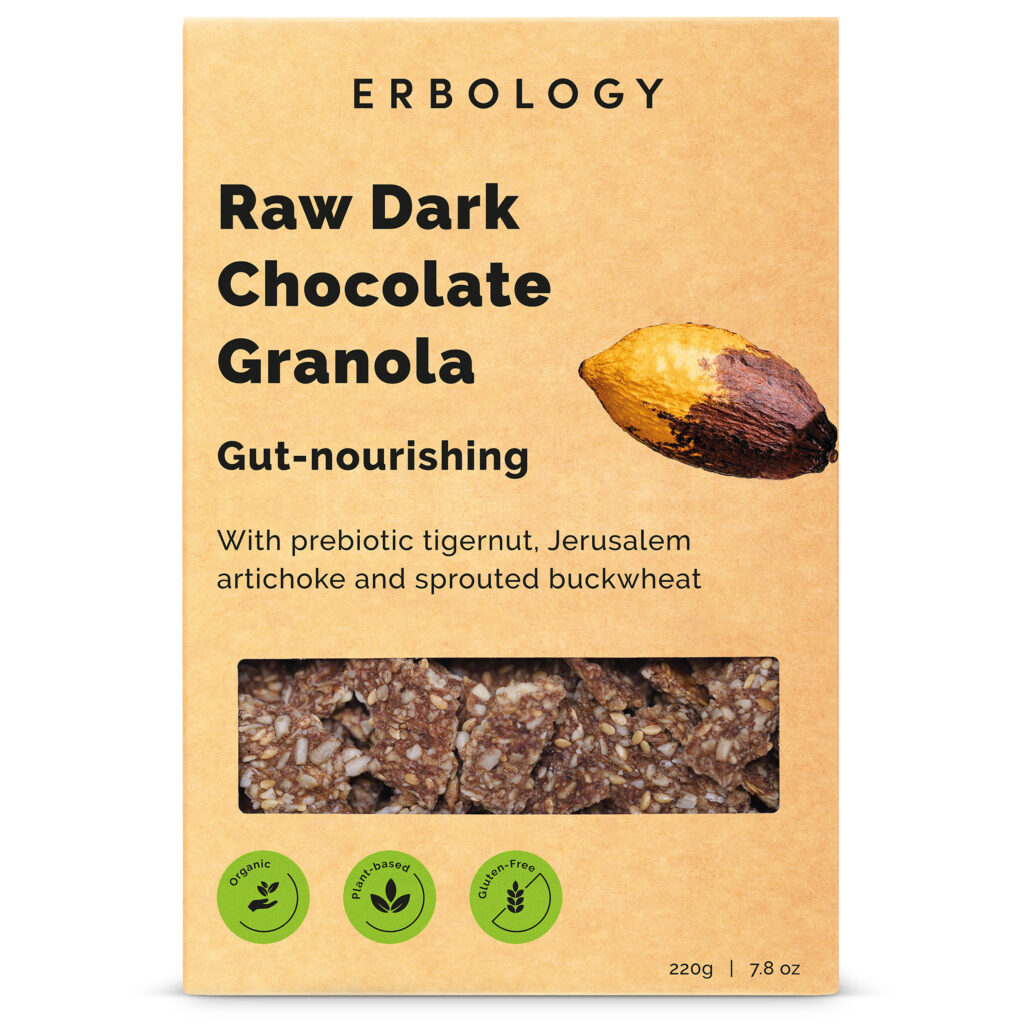 Vitamins and minerals in Jerusalem artichoke

Aside from iron, Jerusalem artichoke also contains copper and is high in potassium. This is especially beneficial for people at risk of high blood pressure. Potassium can also work to reduce heart disease.(2) In addition, Jerusalem artichoke contains thiamine (vitamin B1). Thiamine is essential for the healthy functioning of the nervous system and muscles.

Historically, Jerusalem artichoke was used as a folk remedy for diabetes, and scientists are starting to back that up with empirical data.

A study carried out by Korean scientists found that Jerusalem artichoke improved insulin secretion and sensitivity in diabetic rats.(3) Research also shows that the fructans in inulin may act to stop the growth of cancerous tumour cells in the colon.(4) Interestingly, another study shows that helping the microflora in the gut – as inulin does – also relieves blood pressure.(5) 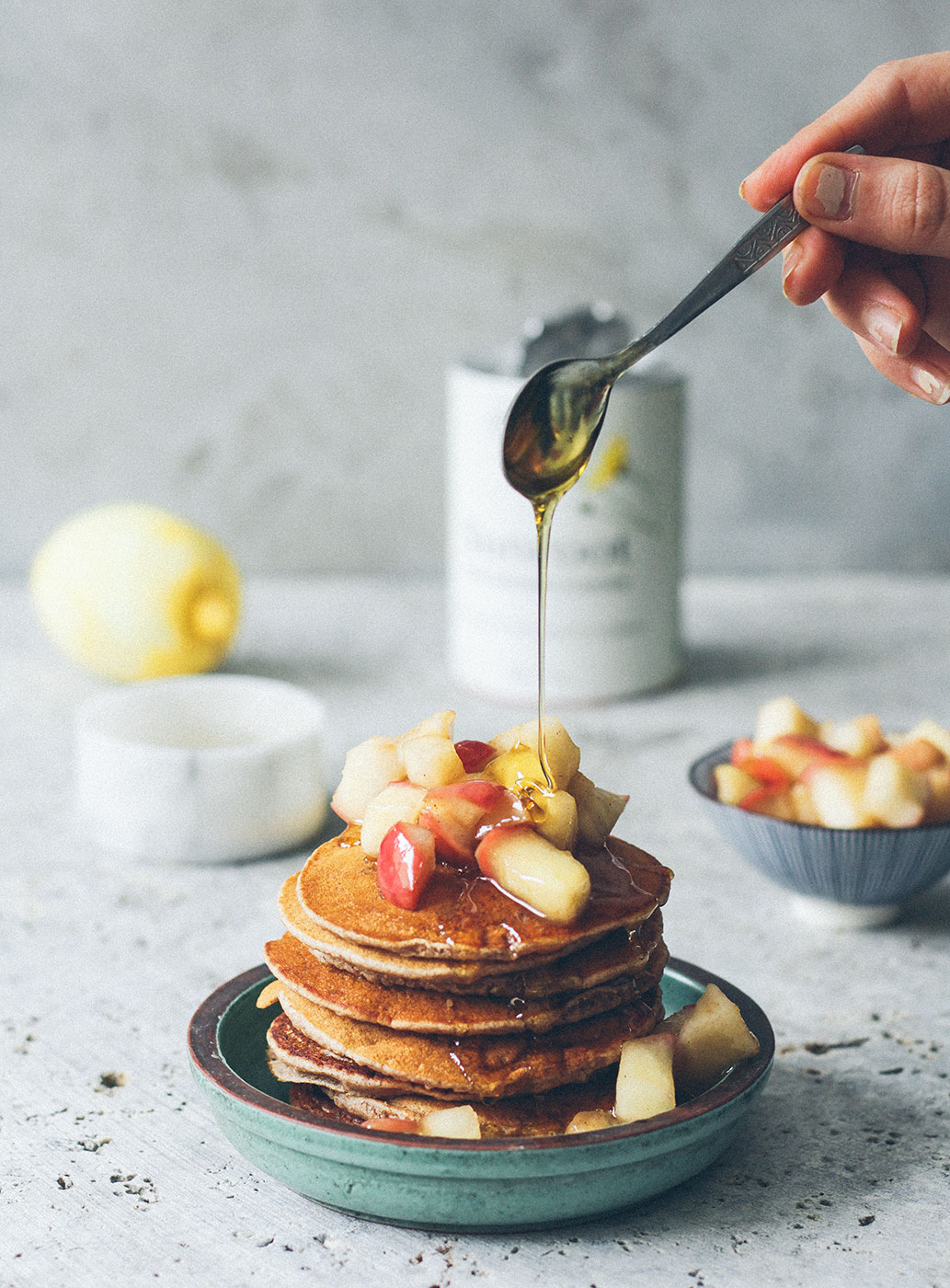 Spread apple puree through the pancakes themselves, then add your favourite toppings for a guilt-free weekend treat.

If you are looking for other ways of enjoying sunroot, try one of our three varieties of Organic Raw Energy Balls. They’re perfect pre-workout or simply to enjoy throughout the day whenever you’re flagging and need a healthy boost.

Try a little sunroot for yourself 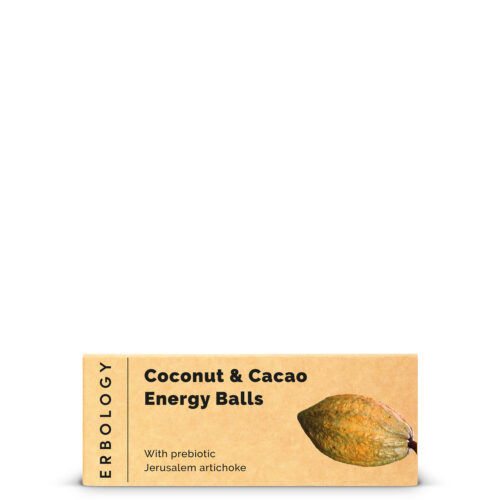 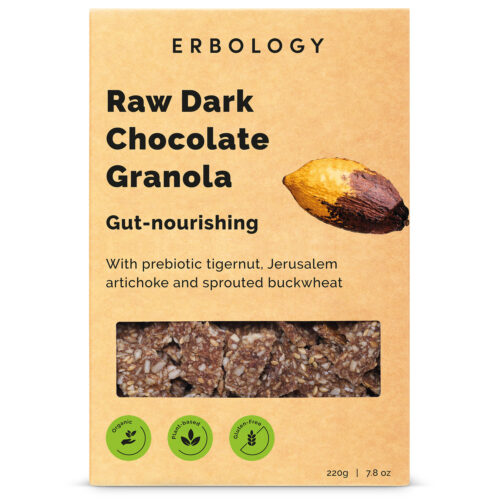 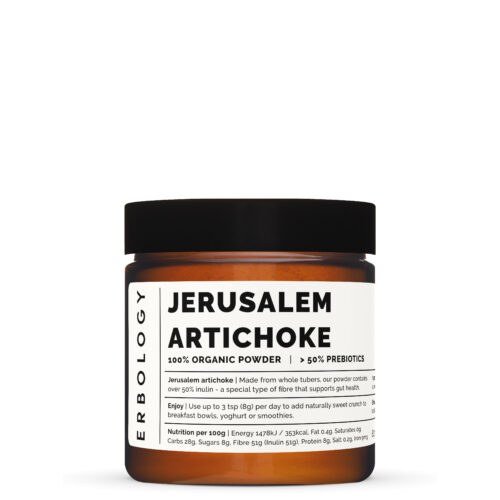 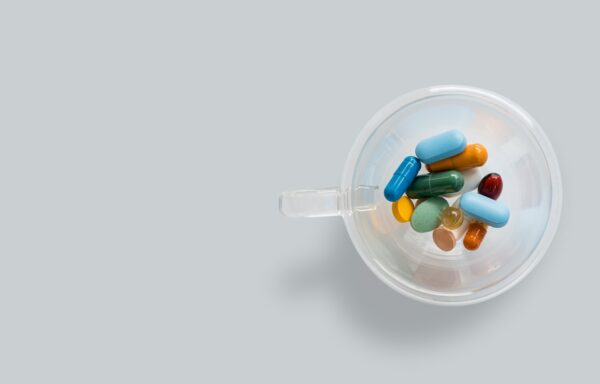 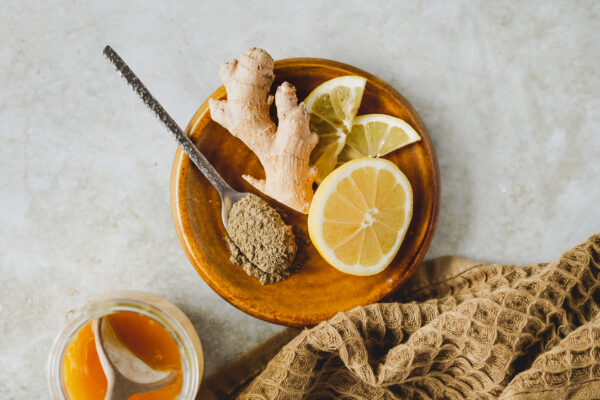