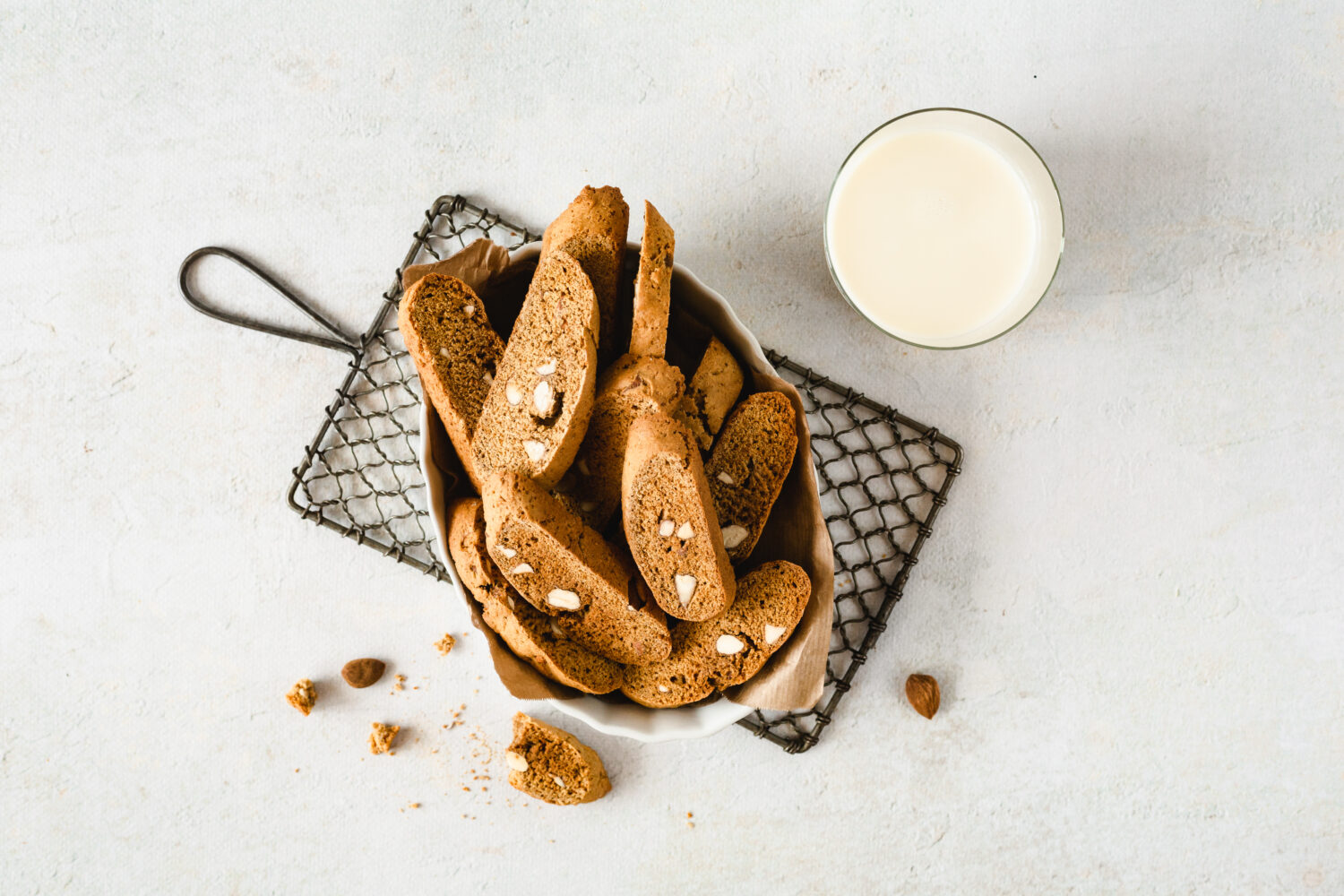 Our almond biscotti recipe comes together in five minutes, before a ‘long and low’ bake to achieve the perfect crispy texture.

A little bit of trivia for you: ‘biscotti’ means ‘baked twice’ in Italian. Actually, the name goes right the way back to the Latin ‘bis coxit’.(1) While the Italians stayed close to the original word, the French and British ended up tweaking it slightly to become ‘biscuit’!

Note: the singular form is ‘biscotto’; ‘biscotti’ is the plural.

Any baker will know that nowadays most biscuit recipes don’t require two stints in the oven. However, biscotti are a bit of a relic, following the original method of biscuit-making.

Bakers would make the biscuit dough and shape it into a large log before baking. The log emerges from the oven still rather soft. Then, the baker slices the log into individual biscuits which are laid out flat on a baking sheet and returned to the oven.

The result? A biscuit with impeccable crispness, which simply begs to be dunked in a glass of sweet Vin Santo. 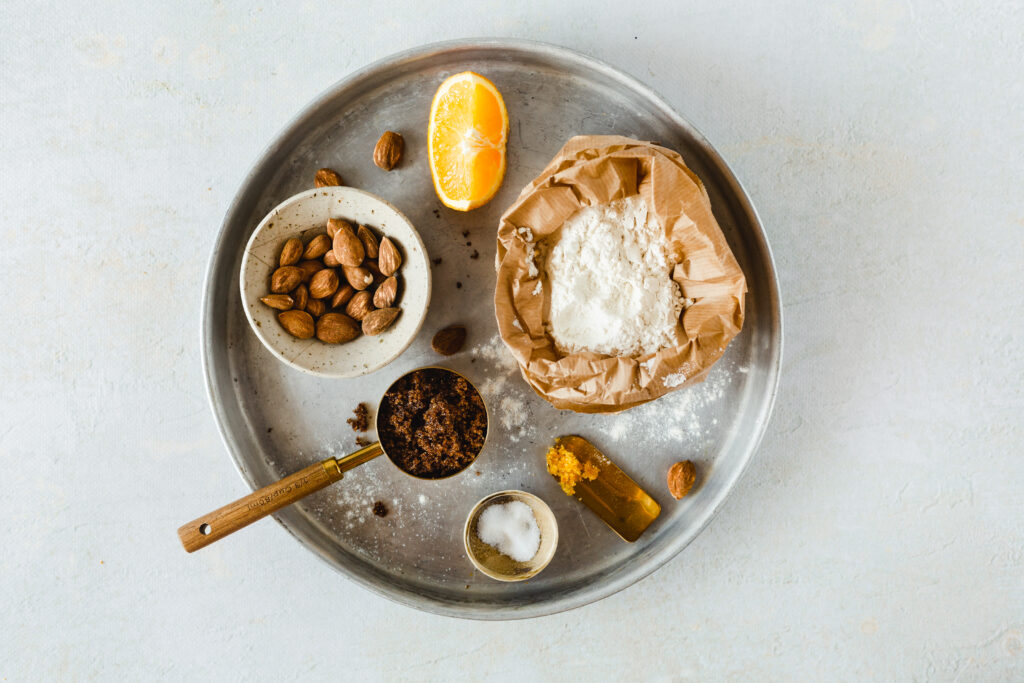 The origins of biscotti

Biscotti date back to Roman times. Back then, they were essentially used as snack packs for Roman soldiers, who needed to be able to carry foods that would keep for a long time.(1)

Pliny the Elder maintained that biscotti would be edible for centuries. Meanwhile, some report that Christopher Columbus had a stash aboard his ship.(2)

Later on, biscotti had a bit of a renaissance (during the actual Renaissance) in Tuscany. It’s at this point that bakers started to add additional ingredients to make the recipe more interesting. While previously biscotti had been rather plain affairs, now they were studded with almonds, pistachios, fruits and spices.

This is also where the relationship with Vin Santo begins. Vin Santo is a Tuscan dessert wine. Its name means ‘holy wine’.

There is some debate about where the name comes from. Vin Santo might have been used as communion wine at some point, or it could be that the wine was traditionally aged and bottled around Easter.

Either way, Tuscans agree that Vin Santo and biscotti are a match made in heaven. In Tuscany the duo remain a popular dessert option.

While Vin Santo is the traditional pairing for biscotti, they also go very nicely with a freshly brewed espresso, especially if enjoyed on a lazy afternoon in the piazza. 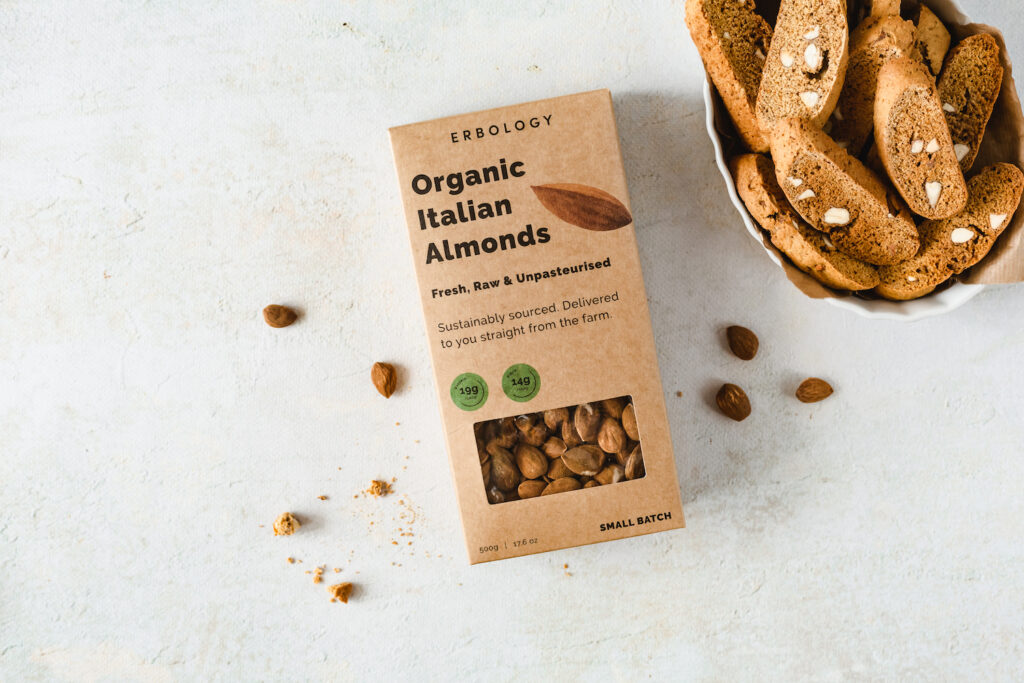 Traditional recipes for biscotti don’t need milk or butter, which gives us something of a head start in creating a vegan version.

They do usually require an egg, but the purpose is to bind the ingredients together rather than provide a rise. Therefore we can easily do without it, substituting in a little bit of liquid in the form of oat milk.

Tuscan versions of biscotti favour almonds, so that’s what we’ve gone for here. However you could also substitute in another nut of your choice. Pistachios and macadamia nuts are particularly good options. 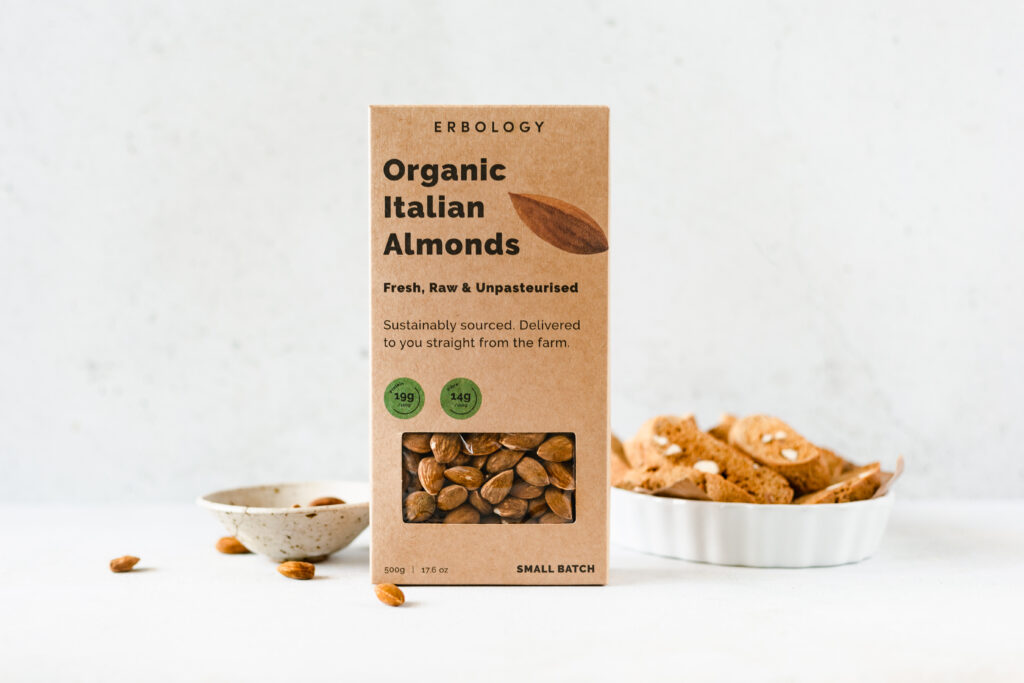 We like to add a bit of orange zest to our orange and almond biscotti to provide a bit of a ‘lift’ to the otherwise dense biscuit.

Orange zest makes an appearance in many Italian baking recipes and orange and almond is a classic flavour combination. You can find it in other famous Italian biscuits, from soft and chewy ricciarelli to nutty amaretti.

A note on oven temperature: make sure to keep the heat setting low. The idea, particularly with the second bake, is to draw out any remaining moisture rather than ‘cook’ the biscuits. This second bake provides the crisp texture of biscotti (and their impressive shelf life).

Once fully baked, serve with your morning coffee, or with a glass of Vin Santo for an after dinner treat.