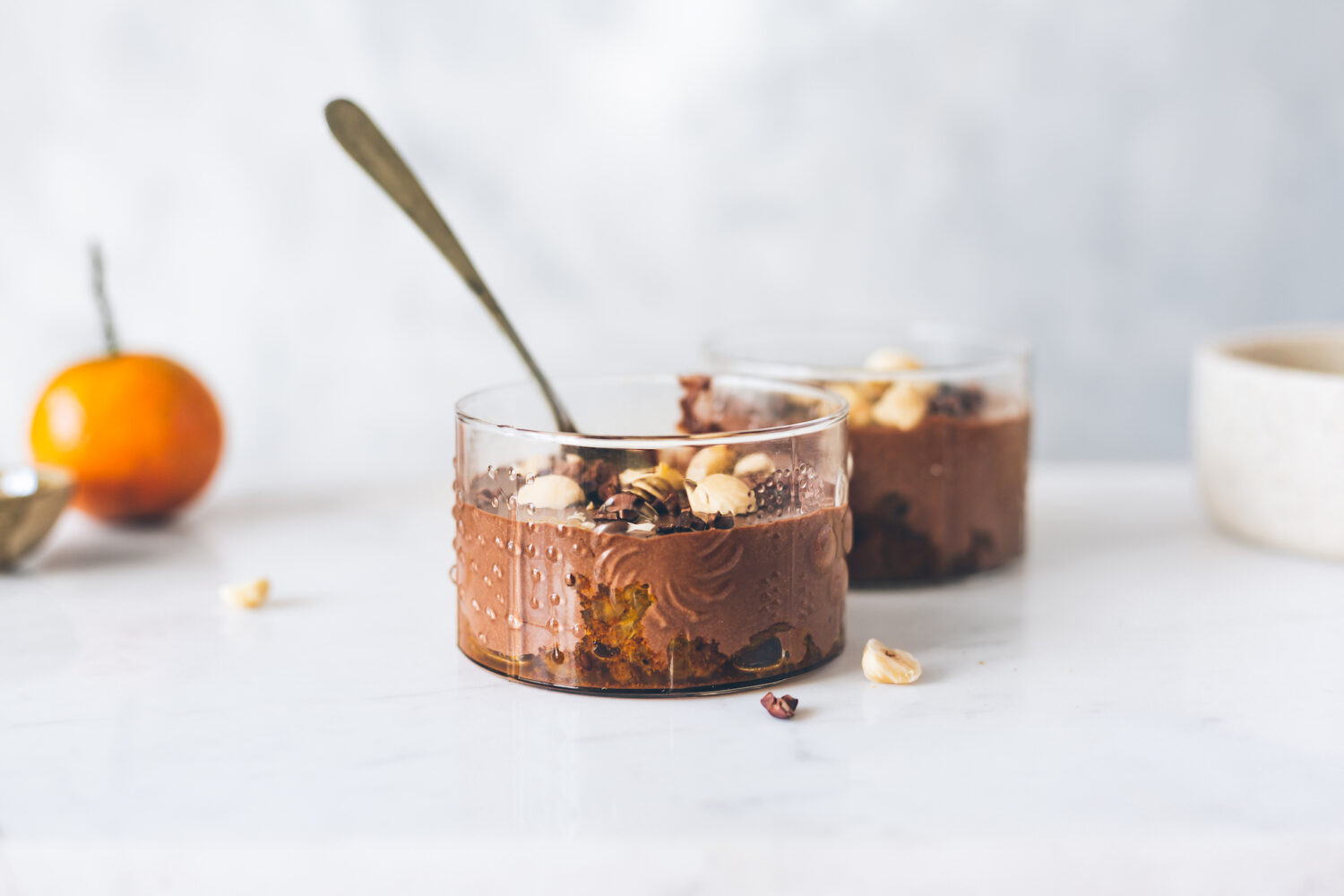 Our dark chocolate mousse with clementines is certainly one of our favourite sea buckthorn dessert recipes of all time. It’s so decadent we can hardly believe that it is made with no dairy or refined sugar…

A traditional mousse au chocolat is a French classic, made with lots of eggs, sugar and dairy. While all recipes have a base of rich egg yolks and dark chocolate, they vary on how to create the light, fluffy texture. Purists go for egg whites alone, while others choose creme fraîche or double cream.

In any case, it presents a challenge for the vegan, health-conscious chef.

A chocolate mousse is nothing if not rich and decadent, so we were determined not to sacrifice on flavour or richness.

Don’t be tempted to skimp on the fat content; not only does it affect the flavour, but it’s also more prone to splitting.

Luckily, coconut milk has a natural sweetness which helped us to eliminate added sugar from the mousse itself.

A chocolate mousse is really just a vehicle for the decadence of good, complex and deeply flavourful dark chocolate. Choose the best you can and allow its flavour to shine in this dessert.

A chocolate with a high percentage of cocoa works well here. Somewhere between 70% and 80% cocoa will provide a rich taste without being too bitter. Certainly, don’t be tempted to go lower than 70% as the sugar content in the chocolate starts to overpower some of the layers of its flavour.

You can melt your chocolate in a variety of ways. Some chefs swear by using a microwave to melt their chocolate.

If you try this method, make sure you’re using very short bursts of heat (no longer than ten seconds at a time) before removing and stirring the chocolate. Be careful not to overdo it, as the chocolate can scorch or ‘seize’, becoming grainy.

We prefer the classic method of using a bain marie, which involves melting the chocolate in a heatproof bowl set on top of hot water. It’s a gentler method, and it can take slightly longer, but it’s pretty much foolproof.

Don’t allow any water to get into the chocolate as it melts, as again you might be faced with some unpleasant ‘seizing’! 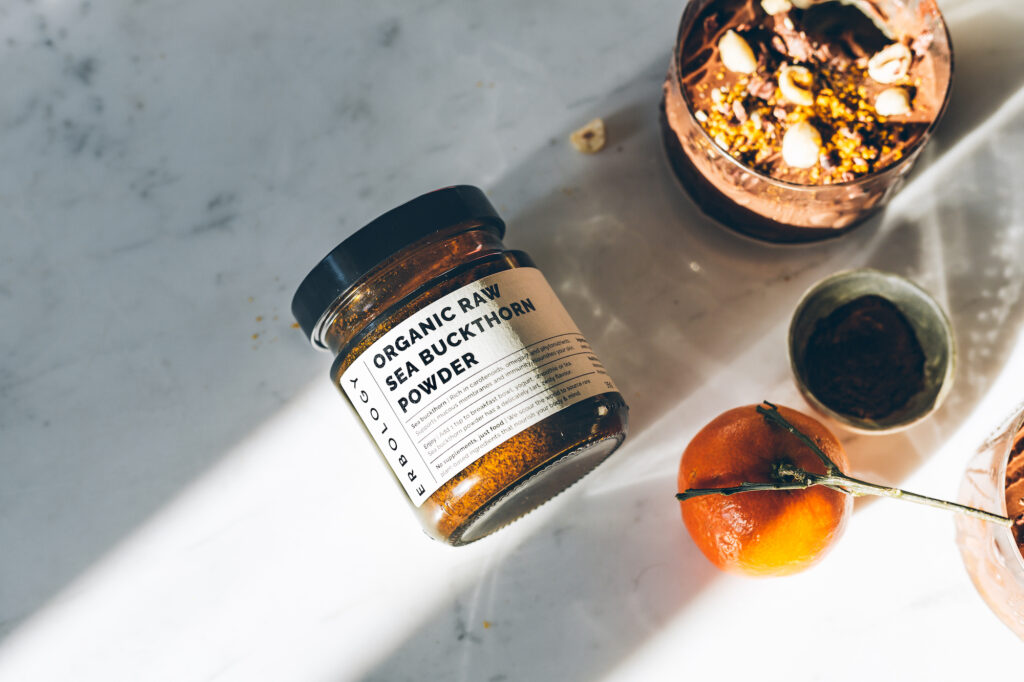 The sea buckthorn and orange layer

Chocolate and orange go together like peas in a pod, but at Erbology we like to put our own stamp on things. If it’s possible, we think that the orange-sea buckthorn-chocolate combo might even beat the original!

Sea buckthorn is a berry which grows in coastal regions and at high altitudes. It’s a nutritional powerhouse, boasting 12 times more vitamin C than an orange in just one little berry. It works brilliantly in sweet dishes and, thanks to its unusual flavour, sea buckthorn desserts never fail to impress.

For those who haven’t tried it before, sea buckthorn has a tart, citrus flavour. Considering it happily grows in cold, rainy Britain, its flavour – which carries the barest hints of pineapple – is surprisingly tropical.

Sea buckthorn absolutely loves citrus fruits, so the combination of tart sea buckthorn and sweet clementine is a match made in heaven.

You can drink sea buckthorn juice neat, and could perhaps use the juice poured over the clementines here, too. However, for convenience (and because we love to bake with sea buckthorn), we’ve used Organic Sea Buckthorn Powder here. It has a vivid orange colour which complements the clementines.

As mentioned, sea buckthorn juice is a fantastic addition to juices and cocktails. Try our tropical smoothie bowl or our sea buckthorn and hibiscus cocktail.

Some said it couldn’t be done, but we think we’ve created a decadent and delicious chocolate  and sea buckthorn dessert which is actually good for you!

Don’t forget that dark chocolate is full of antioxidants and can benefit your health, unlike its overly sugary and fatty siblings, milk and white chocolate. Naturally, the higher the proportion of cacao to sugar, the healthier it will be.

Sea buckthorn powder is also exceptionally healthy. Ours is a source of vitamin C and E, and also contains folate (the natural version of folic acid).

Most impressively, it’s packed with omega-7, a rare fatty acid which is linked to immunity, metabolism and heart health.

Our sea buckthorn powder is also high in beta-carotene, which gives it that fabulous orange colour. As well as acting as a pigment, beta-carotene is converted into vitamin A (retinol) by our bodies, and used to look after our eye health.

And what better way to include these nutrients in your routine than via a delicious sea buckthorn dessert?

You probably didn’t need a reason to indulge in a delicious chocolate mousse, but we hope we’ve given you a few more with our healthy recipe.