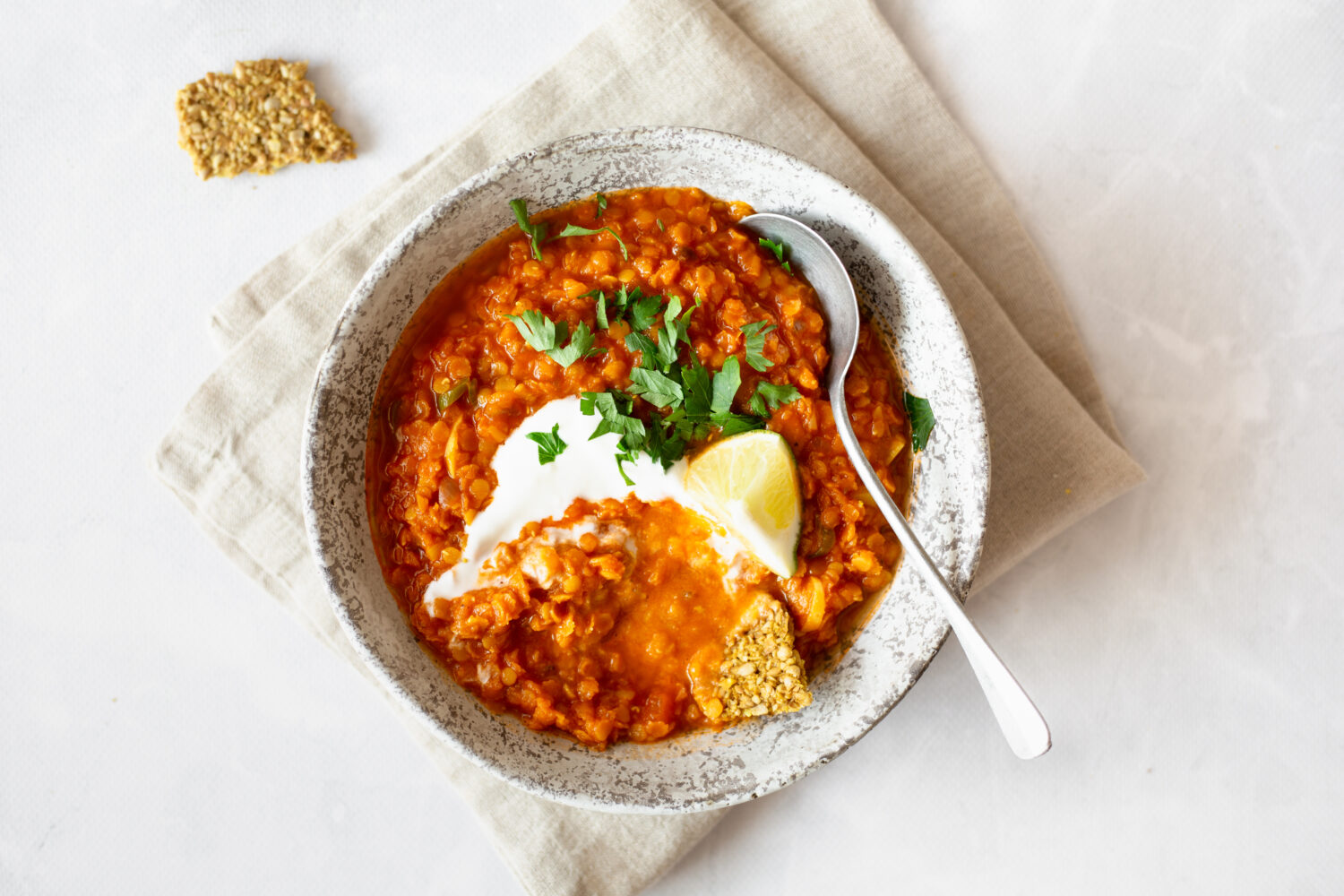 There are almost as many ways to spell dal as varieties of this classic Indian dish. But, whether you call it dal, daal, dhal or dahl, it’s likely that you’ll have a recipe for it stowed away in your kitchen. Allow us to share ours; a smooth, red lentil curry flavoured with warming spices.

After a long, tiring day, or one which has strained our emotions, we crave dal. There is something so comforting about the texture of soft, cooked lentils and the nurturing warmth of spices. It’s a soft, cuddly blanket for the soul.

Dal is easy food; you can eat it out of a bowl, with minimum fuss, or scooped into fluffy naan or flatbreads. You can add extras as you see fit: a spoonful of coconut yoghurt on top, or a side of chutney. A sprinkling of coriander. Or, just as it is.

A world of different dals

Each region in India has its own preferred dals. Some of the most common ones, which you can find all  around the country, are masoor, moong and chana dal. The dish has had a lot of time and space to develop, which is perhaps why so many varieties exist today.

Some early Indian texts even note that dal was served at a wedding in 303BC!

Dal made its way to Indian palaces, where – so the story goes – only chana dal (made with split chickpeas) was acceptable. Serving anything else to royalty was liable to send you to a sticky end.

Meanwhile, moradabadi dal was created in 1625 when the third son of the famous Shah Jahan – the fifth Mughal emperor, who had the Taj Mahal built – established the city of Moradabad.(1)

This type of dal is made with moong dal and is usually served as part of chaat (as a savoury snack). 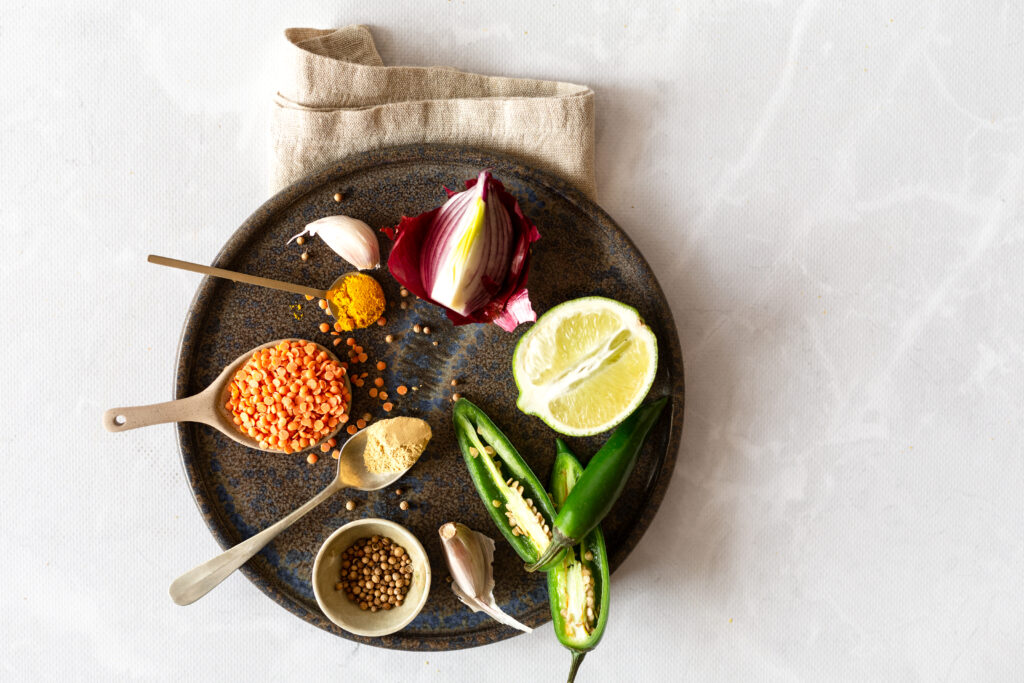 Evidently, we’re not the first to pick up on dal’s delicious, soothing and nourishing properties. In fact, traditional Ayurveda has a lot to say about the benefits of these lovely legumes.

According to Ayurveda, red lentils like the ones we use in our recipe have a sweet and astringent flavour (rasa). According to the tradition, they are cooling, light and soft.(2)

This means that they help balance Vata, Pitta and Kapha, the three types of energy (doshas) which are present in all things.

Interestingly, the lentils themselves are astringent enough to imbalance Vata (the energy associated with movement). However, cooking them with oil and spices, as in a dal, renders them ‘tridoshic’, meaning that they balance each of the three doshas.

In short, dal is as close to a perfect food as you can get in the eyes of Ayurveda.

In using red lentils to make our dal, we have opted for convenience and ease of sourcing. Most supermarkets and groceries stock red lentils, while you may need to visit a specialist supermarket or look online to find other traditional lentil types.

Officially, that makes our dal a masoor dal, as the dish is usually named after the type of lentil or pulse used.

However, as you might expect, there are hundreds of different variations on masoor dal, which people have adapted over the years to suit their own tastes. It’s perhaps one of the best things about dal that it can be so easily adapted to your mood.

British veggie chef Anna Jones likes to make a super light lemon and turmeric dal, which she swears by for cleansing the body. Meanwhile, for a more substantial and comforting meal, we love to simmer the red lentils in coconut milk.

Feel free to adapt our recipe to whatever you need today. 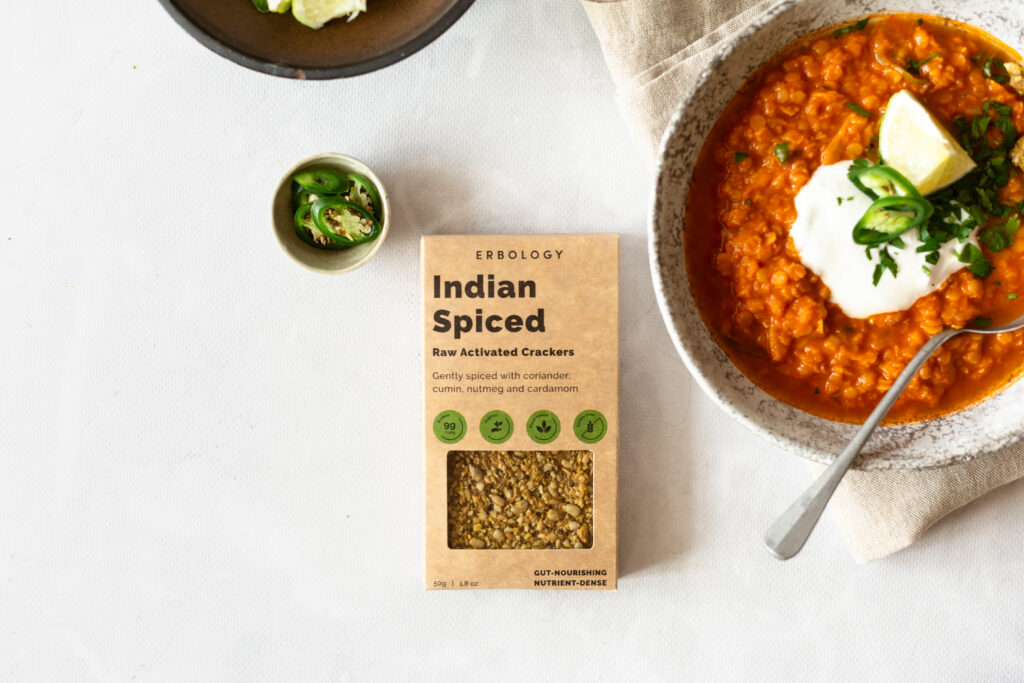 The traditional accompaniment to dal is rice or flatbreads, a combination we continue to adore. However, if you fancy something lighter – for example, if you’re eating our red lentil dal for lunch – then we highly recommend our seed-packed Indian Spiced Crackers.

They have a crisp, crumbly texture which works so well with the soft, warming dal. Further, their flavour echoes the spices used in the recipe itself.

Our crackers are flavoured with garam masala, which is a traditional Indian spice blend of coriander, cumin, nutmeg and cardamom.

They also complement the nutritious nature of dal by bringing their own benefits to the table. For example, they are made with sprouted buckwheat which is good for gut health and low GI.

Our crackers are also a source of iron and B vitamins, and are made using a raw process which ensures that all those precious nutrients reach you intact.

Much like the recipe itself, dal is a dish which manages to fit in wherever it appears. Whether it’s taking centre stage on a royal banquet table, being served from street food stalls to hungry snackers, or providing a nourishing meal on a rainy evening, it’s suitable for all occasions.

We love it served as a main meal, with our crackers or some rice or naan. However, you can also eat it as a snack, as is often the case in India.

However, it also makes fantastic sharing food. Make our dal alongside a couple of other gently spiced curries and serve at the table, surrounded by friends. Enjoy the comforting texture and flavour and how it combines with the other dishes. Cool it with yoghurt, or spice it up with chilli oil. Play with flavour.

After all, if there ever were any dish perfectly suited to care, nourishment and enjoyment, it’s dal.