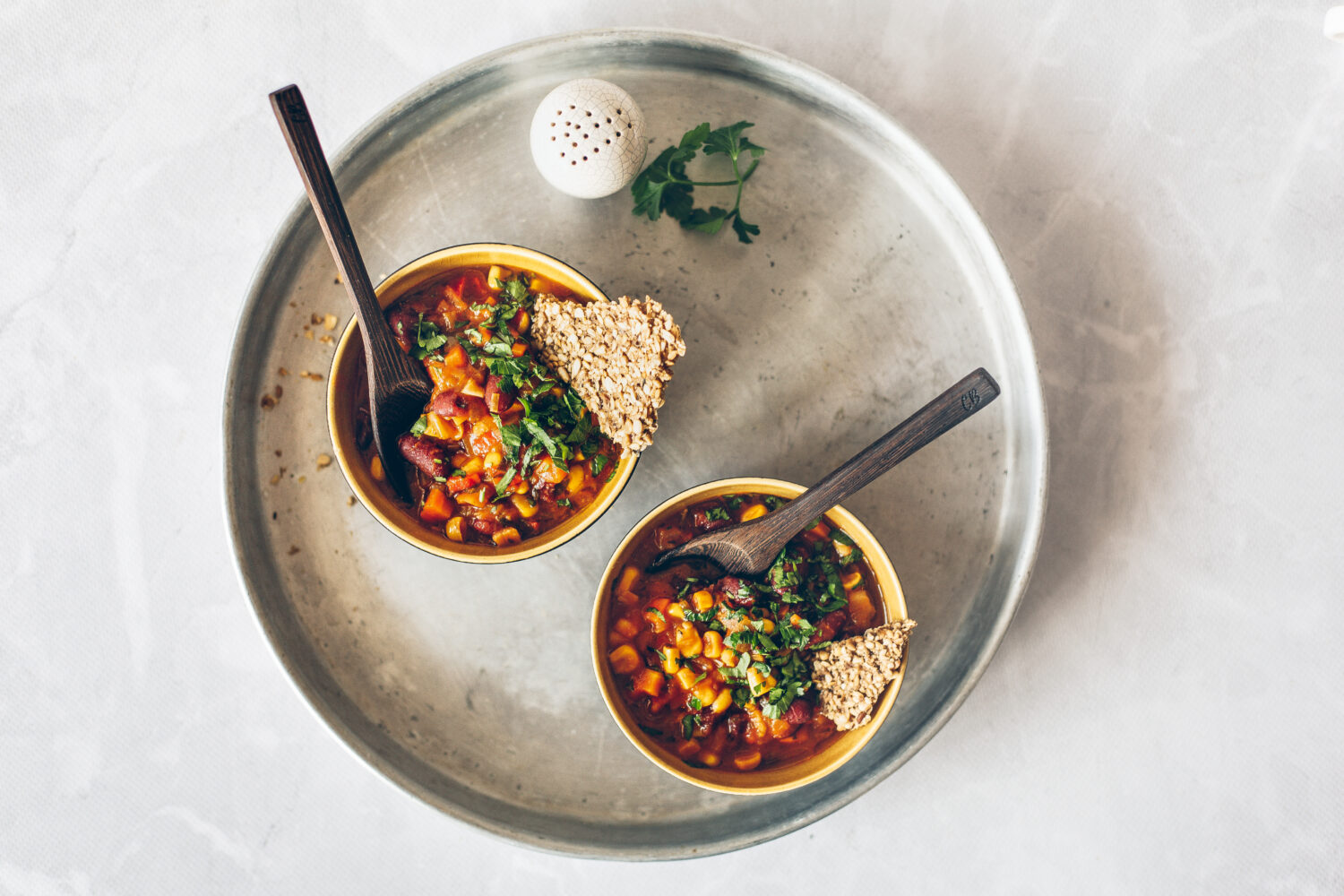 Buzzing with chilli heat and grounded with earthy cumin, our vegan bean chilli is fantastic to warm you up on a cold day. Serve with Erbology crackers for a hearty meal the whole family will love.

A Mexican classic…. Or is it?

The classic chilli con carne is such a beloved recipe that we can easily forget that it is a sort of hybrid; the product of Mexican and American cultures coming together.

So, while the Spanish name suggests that it hails from Mexico, you might be surprised to hear that chilli con carne is actually an American invention (and much disdained by Mexicans).

In one Mexican dictionary, published in 1959, gives a definition for chilli as “detestable food passing itself off as Mexican, sold in the U.S. from Texas to New York.’(1)

There are some really delightful legends around the birth of chilli which demonstrate just how much vehement pride this dish evokes in its fans.

The most horrible of these attributes chilli’s invention to 16th century Mexicans who would boil up deceased conquistadors with hot peppers and wild tomatoes. This story is rather difficult to stomach, so we plan to put it down to propaganda and move swiftly on.

Instead, we much prefer the version which has Texan cowboys cooking up a pot of chilli while out on the trails. 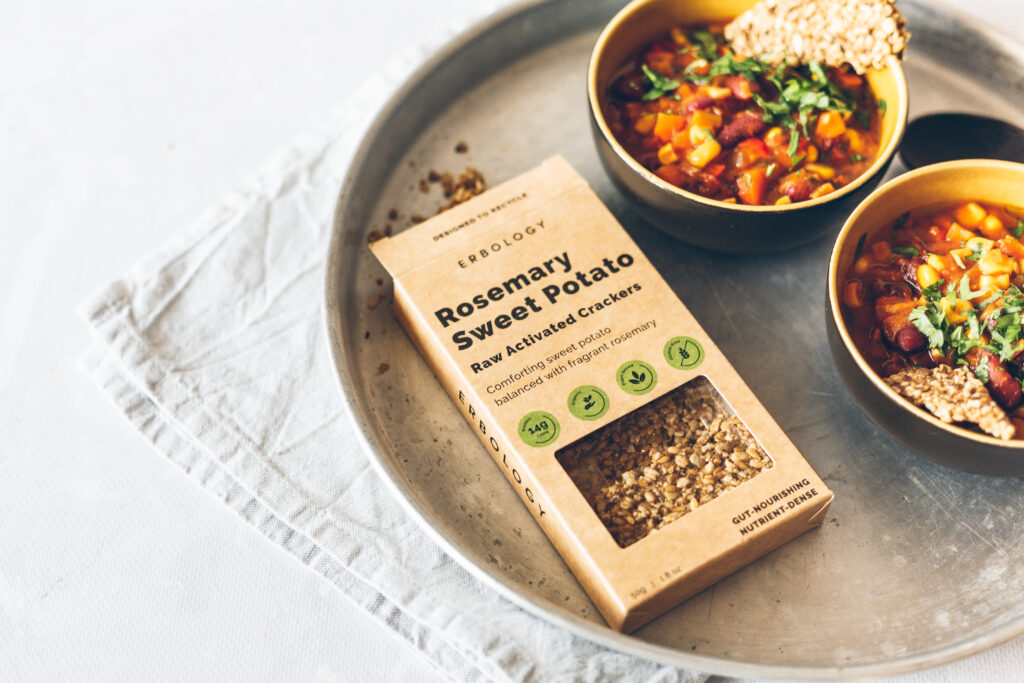 Beans or no beans?

Naturally, the traditional Chilli con carne is made with ground meat, but beans make a hearty and protein-rich alternative for those of us going plant-based. And of course, they’re in the original, right?

Wrong again! In fact, including beans in a chilli recipe is a matter of (surprisingly) huge controversy.

Chilli is the national dish of the state of Texas, which insists on serving it sans beans.

The winner of the 1976 chilli championship, Rudy Valdez, won the accolade using a recipe he claimed was 2,000 years old. His recipe was a traditional version from his tribe, the Ute. While the recipe included deer or horse meat, chillis and cornmeal, he was emphatic on the lack of beans.(2)

That said, there’s also controversy about including tomatoes as an ingredient, but removing both them and the beans would take us perilously distant from the campfire food we know and love.

Mercifully, the International Chilli Society now allows beans as an ingredient, but only as of 2012.

Thus our chilli, while delicious, is decidedly non-canonical.

A few tweaks, here and there

Since we’re not likely to be able to submit our chilli bean and corn stew into any chilli championships, we decided to go the whole hog. What started as a chilli recipe evolved and became what we might call a ‘chilli-inspired’ dish.

It has all the heat and comfort of the original, but we’ve thrown tradition out the window in favour of adding more healthy vegetables.

We rather like the sweet, little nuggets of corn nestling in the crooked elbow of their kidney bean brothers.

The leeks and carrots are an even less Mexican choice, but at this point we’ve established that chilli is, as one cookbook put it, ‘an expression of the cook’s personality, rather than codified chow.’(2)

Plus, they add prebiotic fibre, vitamins A, C and K, and beta-carotene, all of which are fabulously good for you.

The traditional accompaniment to Chile con carne is rice. But as you’ve probably guessed, we’re not going to go down so conventional a route.

Instead, spoon our chilli bean and sweetcorn stew into bowls, to be cradled in one hand while curled up on the sofa. Eschew the rice for our nutritious crackers, whose crisp and crumbly texture is the perfect foil for the gently cooked vegetables.

We recommend our Rosemary and Sweet Potato crackers for the job. The sweetness of the tuber pairs beautifully with the earthy cumin in the chilli. 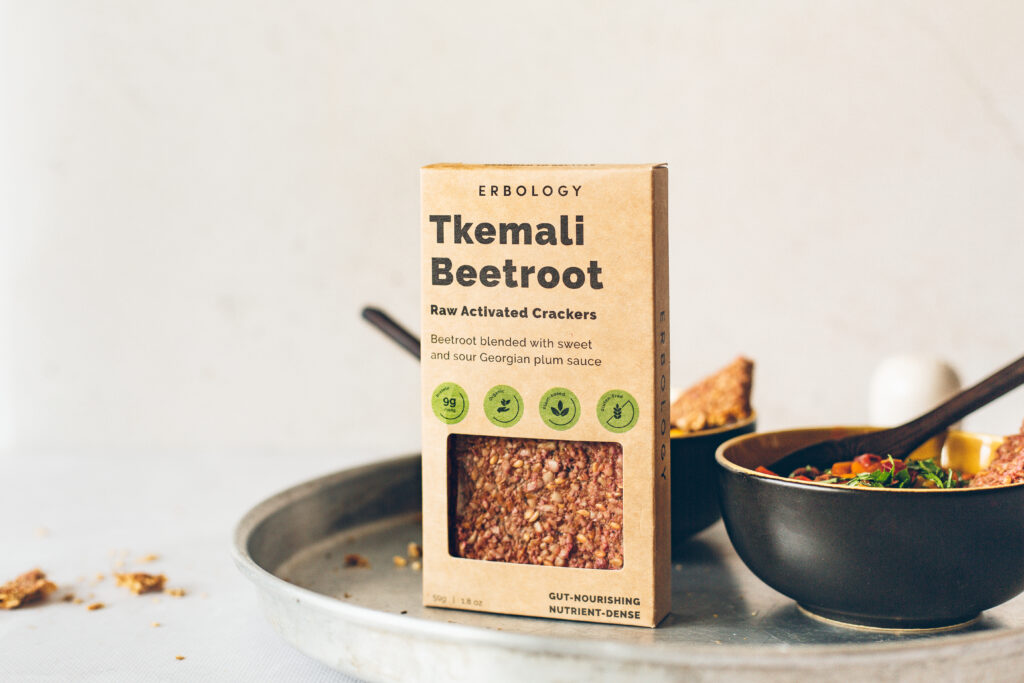 Alternatively, add a note of sharpness with our Tkemali Beetroot crackers. If you’re unfamiliar with Tkemali, it is a sweet and sour plum sauce which hails from Georgia.

Its top note is a sharpness reminiscent of white vinegar or lemon juice, and when blended into our crackers it somehow manages to cut through and lighten the richness of the chilli.

True, it’s not a classic combination.

However, once upon a time a lonely cowboy considered whether it would be a good idea to cook up some meat with chilli peppers, and a star was born.

Perhaps the chilli-cracker duo will follow a similar path. For now, though, tradition be damned; it’s delicious.