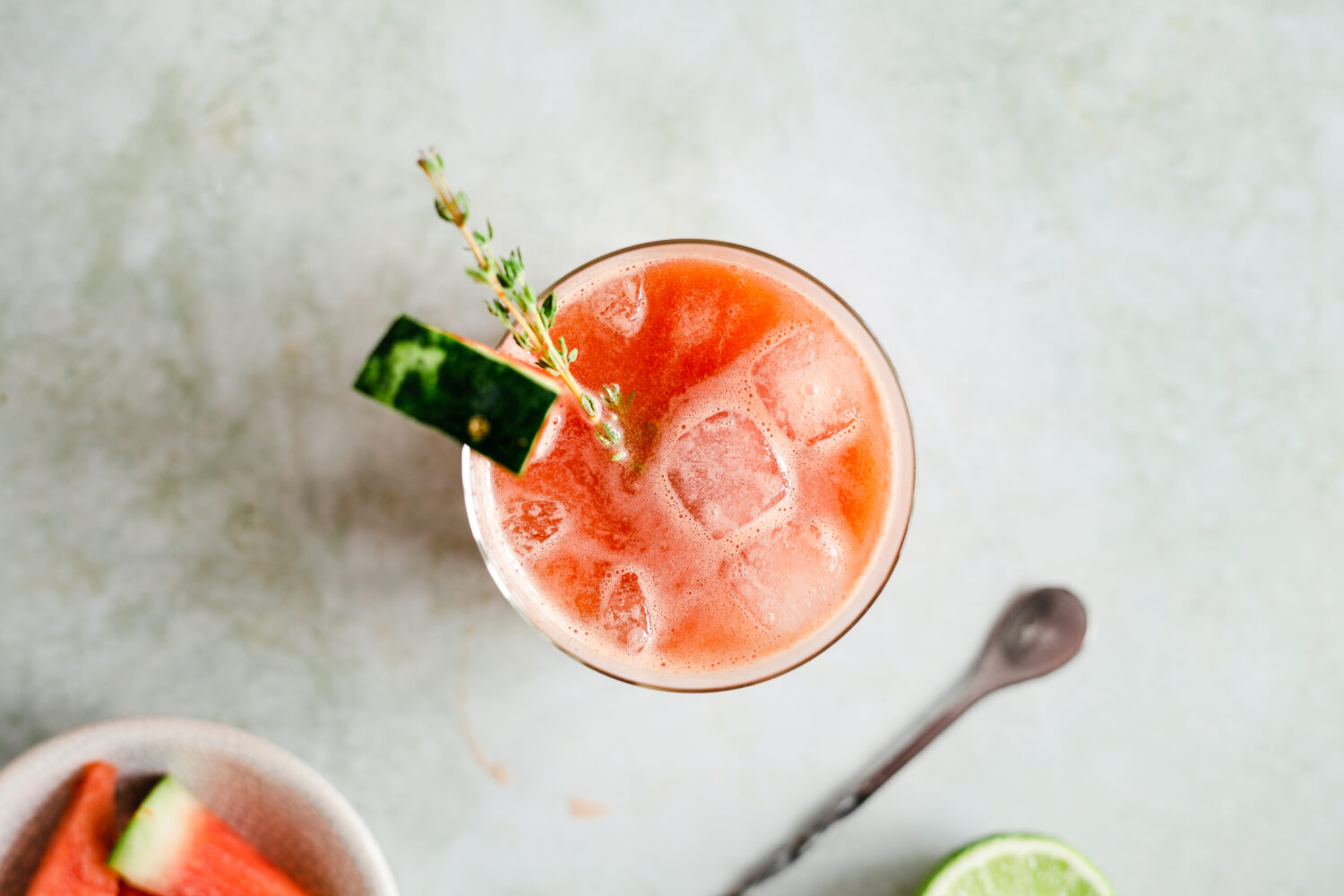 Refresh your senses and rejuvenate your body with our delicious watermelon cocktail. Easy to throw together in a couple of minutes, it’s a delicious way to start the day without alcohol, or add your favourite tipple for a tasty sundowner.

A few things you never knew about watermelon

When we were kids, watermelon usually only made its appearance at the height of summer. A special treat at family gatherings and barbecues, laid out in juicy triangular wedges for the children to grab, it’ll forever be associated – in our minds at least – with sunshine and garden parties.

You will probably already know that watermelon is so refreshing because it is mostly made up of water. Up to 92% water, in fact.(1) However, the rest of that 8% is so jam-packed with good stuff that its benefits extend far beyond its rehydrating properties.

Watermelon boasts several health-promoting nutrients, including vitamin C, beta-carotene and other antioxidants such as carotenoids and flavonoids, B vitamins, potassium and magnesium.

It’s fat free, low calorie and contains no cholesterol. In other words, it’s pretty much the perfect snack.

Two additional facts we could not resist including: firstly, the watermelon originates from the Kalahari region of Africa. And secondly, it is not technically a fruit. It’s a gourd!(1)(2) 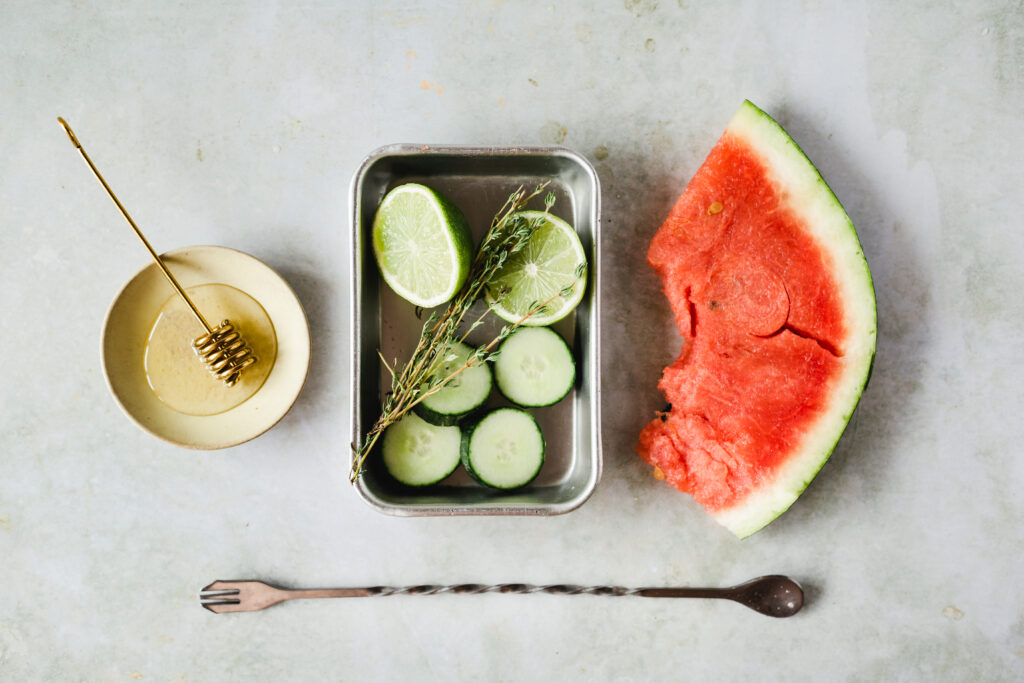 In addition to its library of healthy nutrients, watermelon is also a source of lycopene. This was only discovered quite recently; prior to this, scientists believed that only tomatoes provided a decent source of it.

However, it’s still a powerful antioxidant, able to help fight off free radicals which would otherwise cause cell damage and ageing.

What’s more, to get the most lycopene out of tomatoes you need to cook them. (This is why, unusually, tomatoes are considered more nutritious after cooking rather than eating raw). On the other hand, watermelon provides plenty of lycopene that our bodies can get at straight away, making them a more efficient source.

Why should we be bothered about lycopene? Well, scientists believe that its antioxidant properties might make it a good candidate to potentially treat diseases caused by oxidative stress (free radical damage). These include neurodegenerative conditions, diabetes and osteoporosis.(1)

Carotenoids like lycopene may also be able to defend us against macular degeneration, protecting our vision.(1)

While more research is needed to establish lycopene’s effectiveness in these scenarios, it certainly gives us even more reason to nibble upon a slice of watermelon. Or, indeed, to use the juice in our watermelon cocktails! 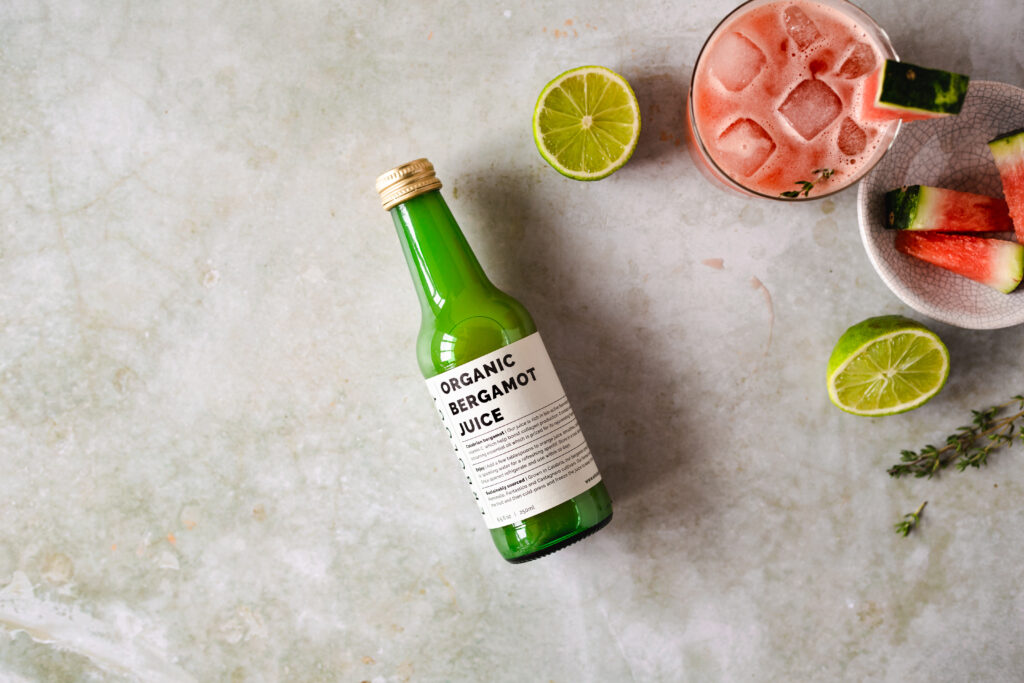 As both have a rather watery, crisp texture, it might not be surprise to find out that watermelons are related to cucumbers.

They also share that light, refreshing and subtle flavour, with watermelon slightly sweet where cucumber is distinctly vegetal. They’re a match made in heaven in terms of cocktail mixing.

(Curiously, watermelons are also related to pumpkins and other squash, but these don’t go so well in a cocktail.)

Cucumber (officially, Cucumis sativus) is another gourd pretending to be a fruit (or perhaps, vegetable?). And, like its larger cousin the watermelon, it contains myriad healthy nutrients alongside its high water content. These include tannins, saponins and flavonoids.

So, we have two powerful sources of nutrients providing a light and refreshing flavour. Now, we need to add a flavour which is just as refreshing, but offers more depth of flavour to balance the top notes of cucumber and watermelon. Enter: bergamot. 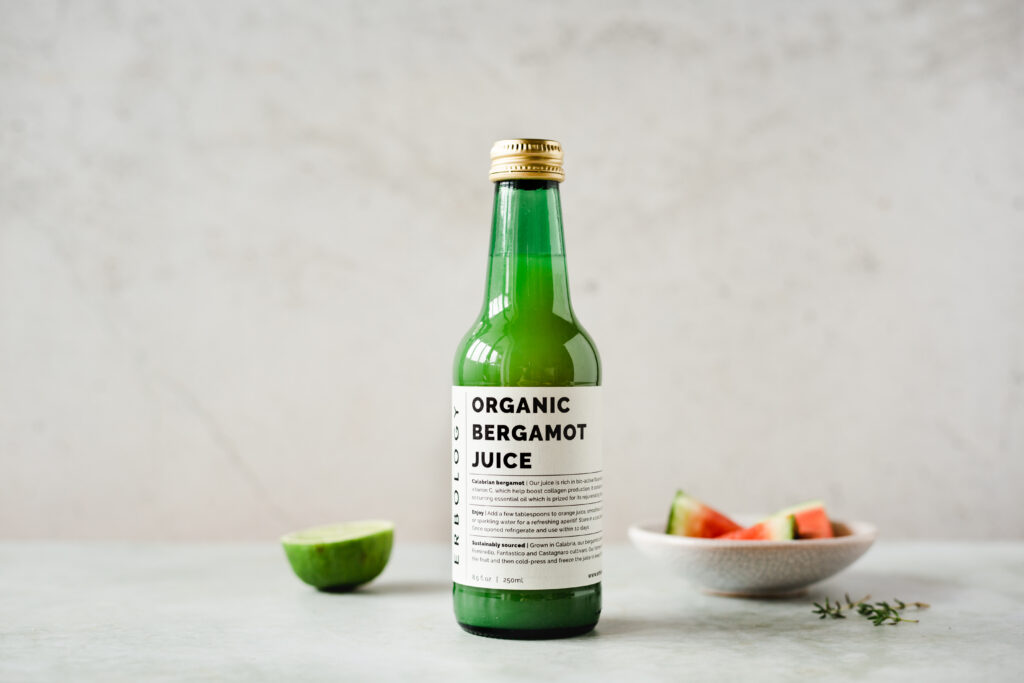 If you haven’t tried it before, bergamot is a small citrus fruit which looks rather like a cross between lime and orange. In terms of flavour, it’s similar to bitter orange. What’s more, you will certainly recognise its fragrance, as perfumers regularly use bergamot essential oil to craft their fragrances.

We source our bergamot from Calabria, Italy. It’s the home of the world’s finest bergamot, and farmers have been cultivating it throughout the region for generations.

So, how does bergamot juice hold up to the impressive properties of watermelon and cucumber? As you may have guessed, it brings plenty of health benefits to the table.

First of all, our bergamot juice is rich in vitamin C, which is needed for a healthy immune system. It’s also an antioxidant and is vital for collagen production, making bergamot a natural skin saviour.

There’s some scientific evidence that bergamot can ease inflammation, psoriasis and even hair growth.(3)

Like watermelon and cucumber, bergamot contains lots of antioxidants, including flavonoids.(3)

Other intriguing early evidence points to it possibly being able to reduce the sensation of hunger and protect the cardiovascular system through its antioxidant effects.(3)

How to enjoy our watermelon cocktail

As with all of our cocktails, the original recipes are alcohol-free. This is so that everyone can enjoy them any time of day. For example, they work just as well as a delicious morning juice as they do as an evening drink.

If you would like to add alcohol to your cocktail, we’d recommend a light spirit such as vodka or gin to complete your cocktail.

Don’t forget to garnish with a small piece of watermelon or cucumber, and perhaps a sprig of thyme to finish.