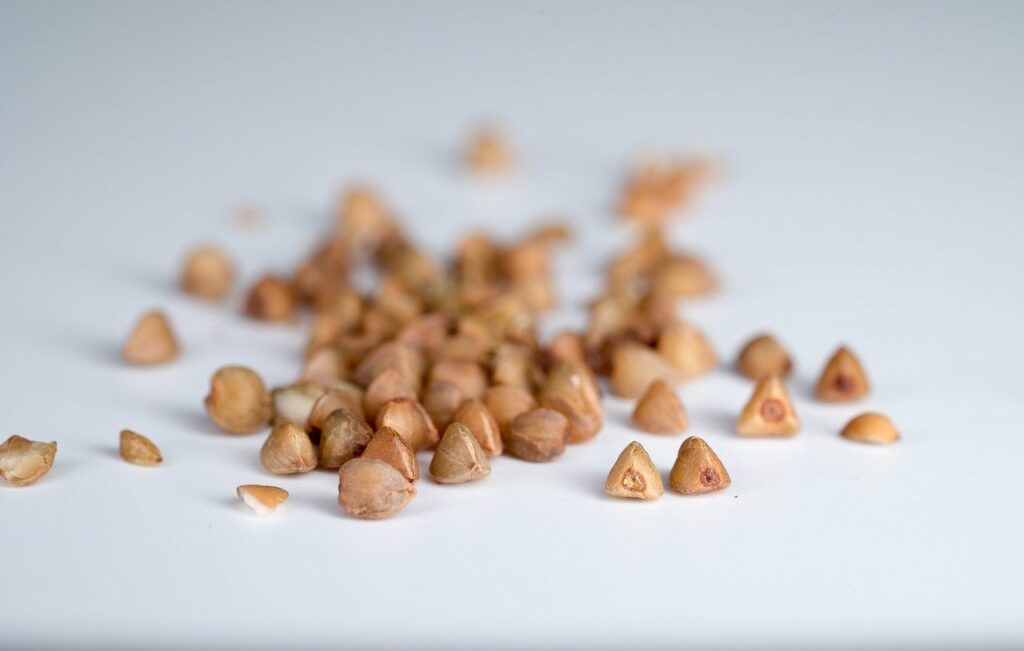 Despite being classed as a 'pseudocereal', buckwheat has very real benefits for your health!

What exactly is a pseudocereal?

Like many other grains, buckwheat is a pseudocereal. This simply means that it’s a seed which commonly eaten and used in the same way as a cereal.

Other pseudocereals include ancient grains like amaranth, quinoa, chia and acacia seed. In the 20th century, these nutritious grains fell out of fashion as nitrogen fertilizer became more common. This kind of fertilizer makes it very easy (and profitable) to grow wheat, encouraging farmers to choose this one crop over all the others. Luckily, thanks to more open-minded and health-conscious consumers, pseudocereals are making a big comeback.

Buckwheat has been a staple crop for thousands of years in many cultures around the world. It has been traced back to 4,000 BC in Japan, but as probably been grown for even longer in other places. In Yunnan Province, China, people have been growing buckwheat since 6,000 BC. Here, at the edge of the Tibetan Plateau, buckwheat grows more than 4,500 metres above sea level.

In Traditional Chinese Medicine, buckwheat is thought to benefit your Qi, or vital energy.

Where does buckwheat come from?

From its likely origins in ancient China, buckwheat made its way to the Americas via European settlers. Historically, Russia leads the world in buckwheat production, followed by China.

Buckwheat cultivation in the United States seems likely to rise due to an increasing interest in ancient grains, which often require less processing. Aside from their health benefits, it might be the case that people are ready to go back to their roots after decades of consuming processed wheat and corn.

This is especially true if people have connections to parts of the world where buckwheat is still regularly consumed. Nutritionist Vandana Sheth of the Academy of Nutrition and Dietetics says, “People might be more interested in trying these grains because of their place of origin, history and the culture”.(1)

In India, buckwheat is so beloved that it is the focus of its very own festival! During the Navrati festival, people celebrate by only eating foods which contain buckwheat.

Buckwheat is a very nutritious and, happily, low-maintenance crop. It only needs ten to twelve weeks to grow.

Buckwheat is also a reliable cover crop, which means that it can be grown in between other crops to help improve soil fertility and prevent erosion. As such, it helps other crops to grow, protects natural wildlife and is compatible with climate-smart agriculture. In short, growing buckwheat is great for restoring diversity both into our diets and into the environment.

Buckwheat seeds need to be hulled before consumption, but hulling the seeds is very easy to do.

If that wasn’t enough, bees who collect nectar from the tiny flowers of the buckwheat plant produce a nutritious and uniquely delicious honey. 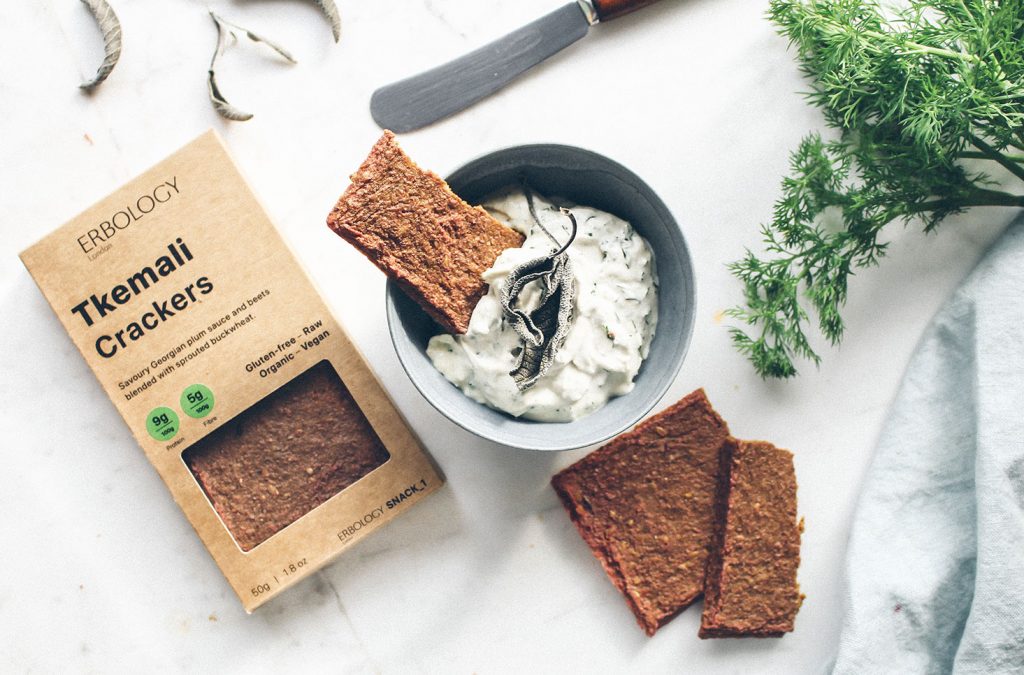 Buckwheat: the gluten-free backbone of your favorite dishes

You might be surprised to find out that, even if you’ve never eaten the grain itself, you’ve eaten buckwheat many times before! Many popular dishes include buckwheat as an ingredient, such as soba noodle, Polish kasha, Breton galettes and even a kind of polenta which comes from Apulia in northern Italy.

Even if you don’t have a sensitivity to gluten, chopping and changing your whole grains is likely very good for your health, anyway. Not only are you increasing diversity in your diet, exposing you to a wider range of healthy minerals, gluten-free grains have benefits for everyone. These grains may help prevent bloating, constipation, diarrhoea and leaky gut syndrome.

Gluten-free drinkers may spot buckwheat beer cropping up more in their local pub, while the grain itself is becoming more common in many popular dishes. Buckwheat porridge is just one example of how you can substitute this grain into your usual favorites.

18% of buckwheat is protein, which is fantastic news for vegans and vegetarians who need to obtain their amino acids from plant sources. Buckwheat contains all the essential amino acids your body can’t produce on its own.

Quinoa still leads the pack in terms of protein-rich grains, but buckwheat still storms ahead of rice, wheat, millet and corn. Moreover, buckwheat contains lysine and arginine, two specific amino acids which are difficult to find in other cereals and whole grains.

Buckwheat is also a source of important vitamins and minerals including niacin, magnesium, manganese, phosphorus, iron, zinc, and selenium.(2) Eating buckwheat will also provide you with fiber and B vitamins.

It is important to remember that some people suffer allergic reactions to buckwheat. Curiously, levels of buckwheat allergies are higher in Asian countries such as Japan and Korea than in Europe or America. 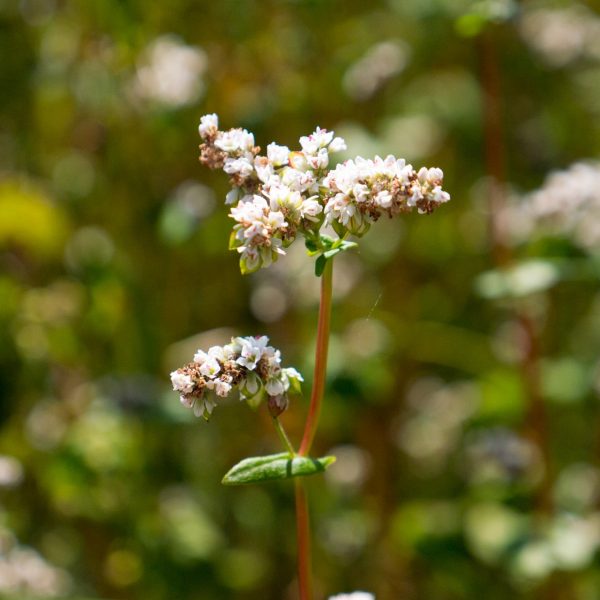 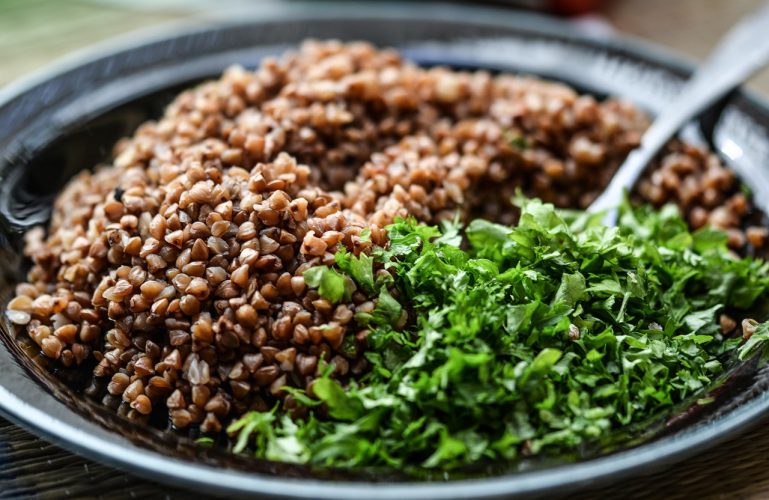 "Buckwheat helps improve soil fertility and prevent erosion. As such, it helps other crops to grow, protects natural wildlife and is compatible with climate-smart agriculture."

Buck up your heart – and keep your blood sugar in balance

Aside from its direct nutritional content, buckwheat also has numerous benefits for your health. This grain has been directly associated with improving heart health because it lowers bad cholesterol and raises good cholesterol.(3)

Buckwheat also contains rutin, a wonderful antioxidant for the heart.(4) In particular, rutin helps your circulatory system function at its best, while helping to prevent high blood pressure.

Positive research into rutin as a natural therapy for Alzheimer’s disease has also been carried out.(5)

Yet another benefit of this superstar phytonutrient, which is found in buckwheat, is that it helps diabetic patients keep blood sugar and insulin in proper balance.(6)

Quercetin is another valuable antioxidant for the heart which is found in buckwheat.(7) Research has shown that quercetin has anti-carcinogenic, anti-viral and anti-inflammatory properties. It has also been shown to decrease platelet aggregation. This means that it prevents blood clots and supports circulation. It may also have immune-boosting activities, although further research is needed to confirm if this is the case.(8)

While flavonoids have a technical-sounding name, they are simply compounds found in many plants. These compounds are grouped together because they share a similar molecular structure. Scientists also believe that they responsible for many of the health benefits of fruits and vegetables. For example, many flavonoids have antioxidant or anti-inflammatory properties.

Buckwheat seems to be particularly good for your digestive system.

Not only is it a good source of fiber, but it may also help prevent oxidative stress in your colon and digestive tract.(9) Korean scientists who studied the liver and colon of animals consuming buckwheat found that they suffered from less oxidative stress.(10) 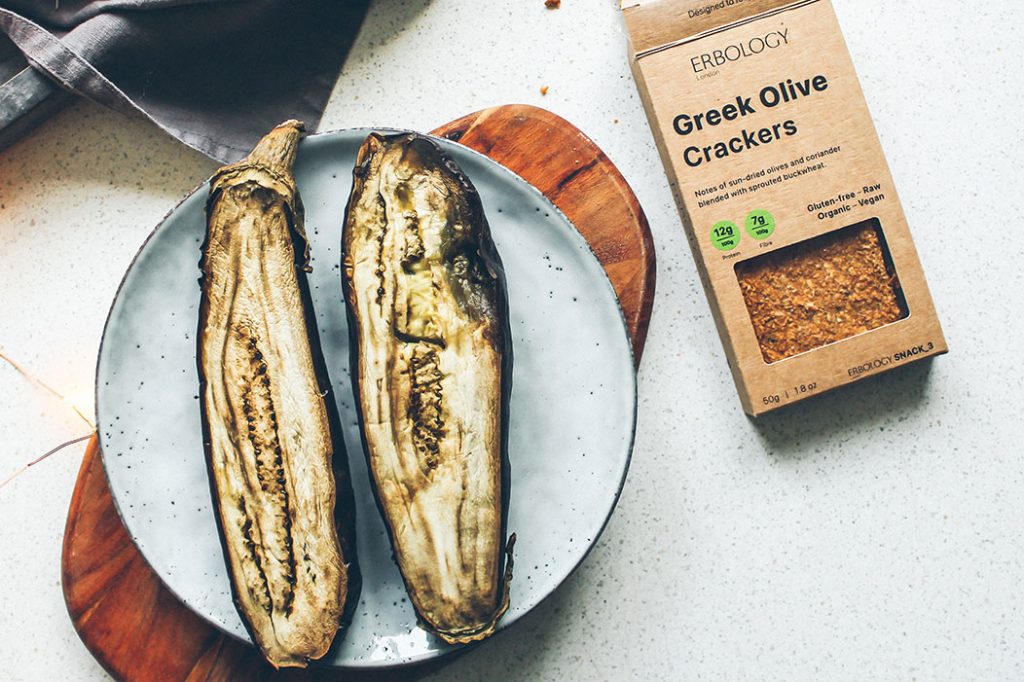 What is sprouted buckwheat?

Buckwheat comes in many forms, including but not limited to flour, creamy buckwheat, raw buckwheat groats (buckwheat hulls), or hulled buckwheat grains. You might also come across ‘sprouted buckwheat’.

Sprouting buckwheat simply involves soaking the grains in water to kick-start the germination process. You may even see little shoots emerging from the buckwheat seeds once it has been sprouted.

Sprouting the buckwheat makes it more easily digestible and increases the availability of all the valuable minerals and nutrients contained within it. You’ll also be able to access more phytonutrients and live enzymes, including co-enzyme Q-10, an antioxidant which helps with cell growth and maintenance.

At Erbology, we believe taking this extra step is definitely worth it for all the additional nutrients. So, all our products containing buckwheat use the sprouted kind.

How do you sprout buckwheat at home?

If you’d like to try sprouting the grain for yourself, the good news is it’s very easy. Once you get into the habit, it will become part of your daily routine in the kitchen and you will be able to add sprouted buckwheat to all kinds of dishes.

To sprout your buckwheat, simply leave your buckwheat groats to soak in a bowl of water for up to 6 hours. Weekend mornings are a great time to do this.

Wash and drain the hulls, then leave them to dry out for a bit. You need to keep the hulls just a bit damp, so add a tiny amount of water – a spoonful or two. After two to three days, small, green sprouts will emerge from the seeds. It’s better than watching the daffodils come out in spring!

Rinse your buckwheat again, drain, and put in a jar in the refrigerator for up to a week. Remember to rinse them every day so that mould and bacteria don’t grow on your sprouts.

We love adding sprouted buckwheat to granolas, salads and stews. 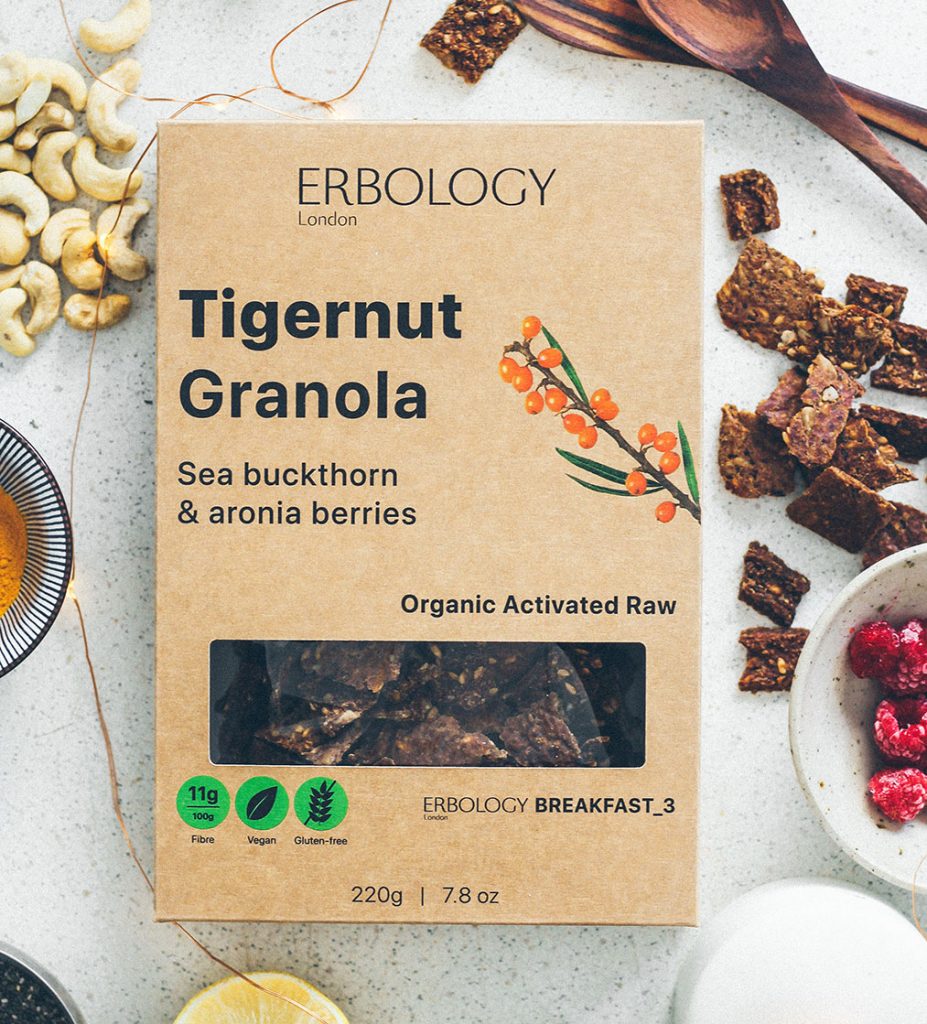 Buckwheat makes a brilliant base for all kinds of recipes. We love to include it in our crackers, such as our Tkemali Beetroot or Greek Olive flavors.

Alternatively, try it in our moreish Tigernut Granola with Sea Buckthorn. Here, we pair sprouted buckwheat with prebiotic tigernut and flavor the whole lot with tangy sea buckthorn and aronia berries. Scatter a few generous, crumbly flakes over your yoghurt for a wonderfully satisfying texture. If sea buckthorn doesn’t float your boat, try our indulgent Jerusalem Artichoke and Raw Cacao flavor, or go exotic with Nopal Cactus and Chia Seed.

Erbology snacks are all certified organic, gluten-free, raw and free from added sugar.

Granola On the Go - Tigernut Sunchoke

Granola On the Go - Tigernut Nopal