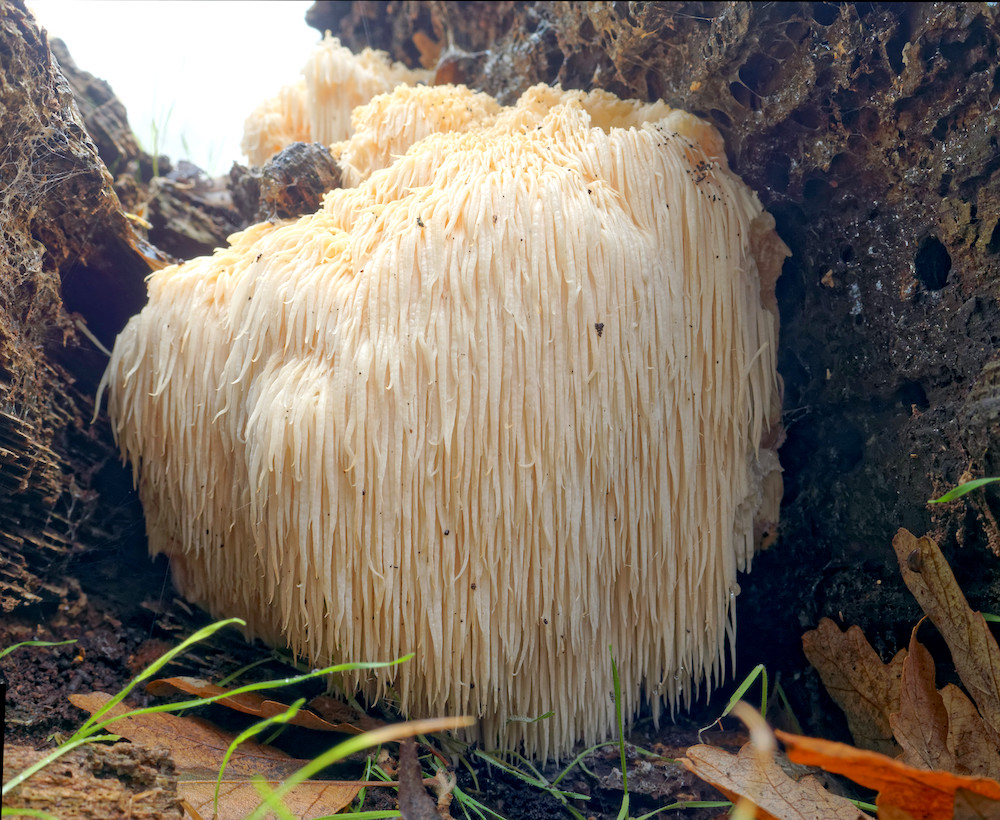 Deep in the forests of Asia, North America and Europe, the lion's mane mushroom grows. Its cream-colored tendrils cascade over fallen trees, looking from a distance like the hair of a lion's mane, or the flowing white beard of a wise old man. It is a newcomer to Western medicine, but traditional wisdom has known of the health benefits of lion's mane for years. Let’s take a look at the scientific evidence.

What is lion’s mane mushroom?

Lion’s mane is an edible mushroom. It has been used for centuries in traditional Chinese medicine to treat a range of health problems. Its Latin name is Hericium erinaceus, but it also goes by a wide variety of creative names in different countries.

In Japan, lion’s mane goes by the name of ‘Yamabushitake’, which translates to ‘those who sleep in the mountains’. This is a reference to a sect of hermit monks called Shugendo who live in the mountains and wear long, flowing white robes.(1)

It can be eaten whole, and has a delicate texture which many people compare to seafood. It’s also widely available as a supplement or in the form of a powder.

Where does lion’s mane grow?

Lion’s mane mushrooms grow in beech forests in Asia, North America and Europe, where it feeds on deadwood. They play an important role in the ecosystem of the forest by collecting up nutrients from the wood of dead trees. They then make these available to other organisms, who eat the mushroom.

While it grows naturally in the UK, the loss of woodland areas has left lion’s mane with a much reduced natural habitat. Because of its reported health benefits, it’s also a target for foragers. For these reasons, it’s a protected species in the UK, benefiting from the highest possible level of legal protection.(2)

Modern science is now beginning to recognize its potential. A number of studies have looked into how this medicinal mushroom could be used in modern medical treatment.

However, the majority of the knowledge available for lion’s mane’s health benefits comes from traditional medicine. 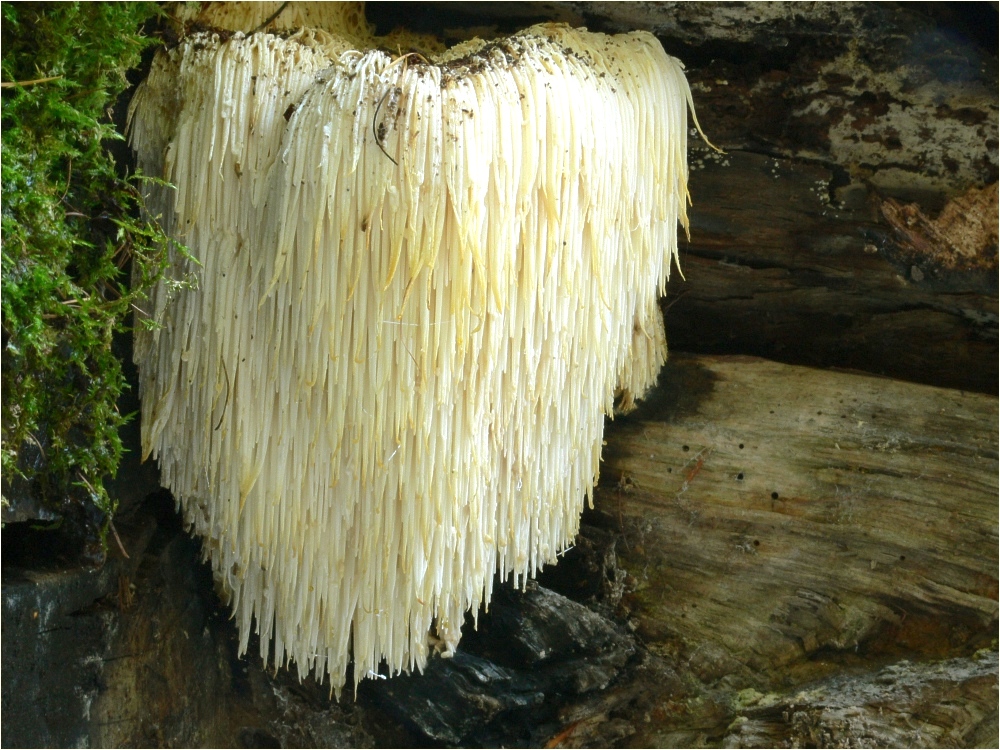 Traditional use of lion’s mane

Lion’s mane mushroom has been a common feature in both Chinese and Japanese traditional medicine. Historically, it seems that traditional practitioners thought of lion’s mane as a good ‘all-rounder’, with benefits for the whole body.

They believed that lion’s mane nourished the five internal organs (the liver, lung, spleen, heart, and kidney) as well as helping with digestion, strength and ‘general vigour’.(3)

Traditional Chinese medicine also recommends lion’s mane to treat Qi deficiency. Your ‘Qi’ is your vital energy, so symptoms of a Qi deficiency might include insomnia and a general feeling of weakness.(3)

Lion’s mane mushrooms are especially associated with brain and cognitive health. Buddhist monks may have used them as a ‘brain tonic’ and to help them concentrate during long periods of meditation.(1)

Modern scientific research has been done to try and gather empirical data that proves the health benefits of lion’s mane, based on its long traditional use.

Here are a few of the findings.

One of the most promising areas of study for lion’s mane is its ability to help with cognitive impairment.

A recent review of ‘in-vivo’ studies looked at the effects of supplementing people’s diets with medicinal mushrooms. The studies covered reishi, cordyceps and lion’s mane, and found that these mushrooms may have a beneficial effect on cognitive impairment. The authors of the review called for more research to confirm the effect.(4)

A Japanese double-blind medical trial looked at whether lion’s mane could improve cognitive function in men and women between 50 and 80, who had been diagnosed with mild cognitive impairment.

The participants took a tablet containing lion’s mane three times a day for 16 weeks. The researchers then observed them for a further four weeks.

The people who had taken lion’s mane scored higher on the cognitive function scale than a placebo group. The authors of the study concluded that their results suggested that lion’s mane was an effective treatment for mild cognitive impairment.(5) 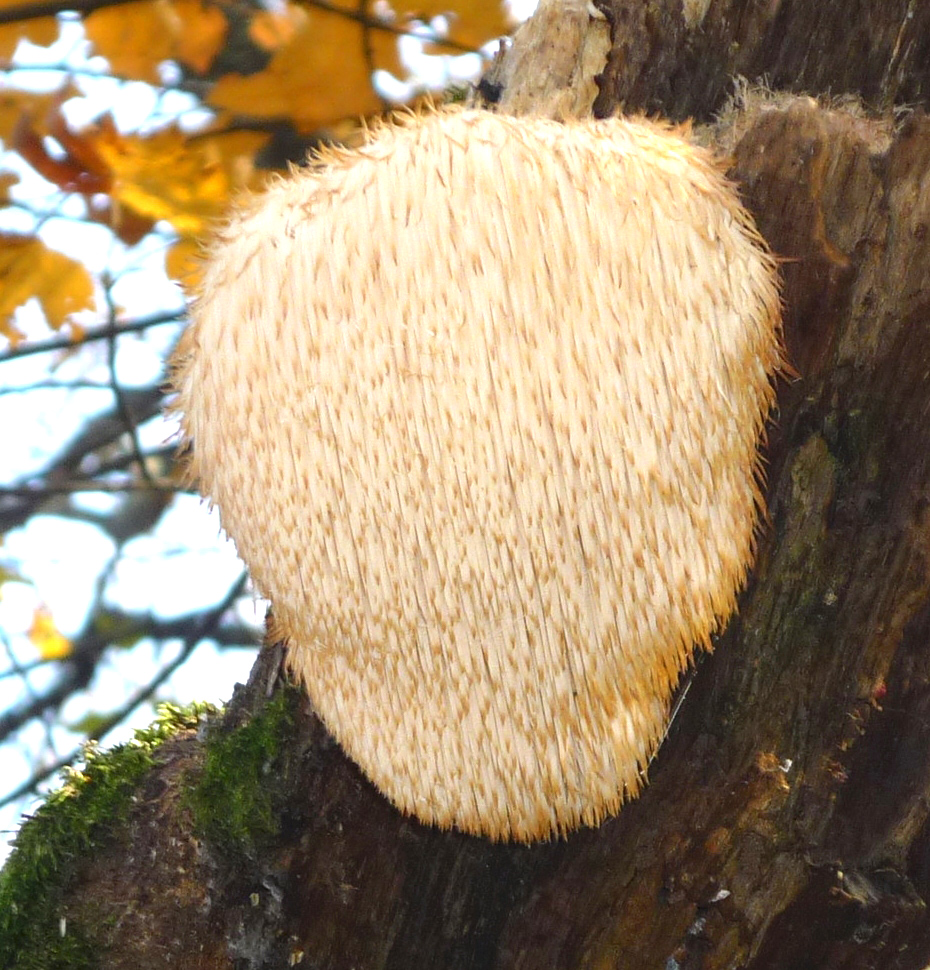 "Lion's mane mushrooms are especially associated with brain and cognitive health. Buddhist monks may have used them as a 'brain tonic' and to help them concentrate during long periods of meditation."

It has potential as a treatment for Alzheimer’s disease

While there isn’t yet enough evidence from human studies, there’s also some promising research around using lion’s mane in the treatment of Alzheimer’s disease.

Alzheimer’s is thought to be caused by deposits of amyloid plaque. This is made up of clumps of protein that collect between the neurons of your brain and prevent them from communicating properly.(6)

It’s important to note that this experiment was done ‘in vitro’, and so far the results have not been tested on human beings.

However, another study looked at the effects of lion’s mane in mice and found that it helped with learning issues and memory loss.(8)

When it comes to lion’s mane and its use as a treatment for Alzheimer’s, it’s very early days. Lots of research is still to be done to see if these promising results can be reproduced in humans. However, the initial indications look very positive.

It could help your digestion and gut health

Traditional medicine rated lion’s mane as a digestive aid. Now, there’s scientific data to back up this theory.

A study in rats demonstrated that lion’s mane acted as a prebiotic, encouraging the growth of health-promoting gut bacteria. The same study showed that the tissue damage caused by Inflammatory Bowel Disease could be reduced by taking extract of lion’s mane.(9)

Another study found that lion’s mane could treat reduce gastric and intestinal ulcers. Peptic ulcers are often caused by Helicobacter pylori bacteria, which weaken your stomach lining and can lead to your own stomach acid causing perforations and bleeding.  It’s an unpleasant condition which causes pain in your stomach area.

The study found that lion’s mane was able to reduce the size of ulcers in rats, and also to protect against gastric mucosal injury.(10)

It can help treat depression

As lion’s mane has such good potential for improving the health of your brain, it doesn’t come as a surprise to hear that it is being investigated for its effects on depressive disorder.

A 2019 study looked at whether the symptoms of depression, anxiety and binge eating could be reduced by taking lion’s mane. The 77 participants all suffered from a mood or sleep disorder, and were all either overweight or obese. As part of the study, they were put onto a low-calorie diet.

A later study from 2020 discovered that bioactive compounds found in lion’s mane were able to somewhat mimic the effect of conventional anti-depressant medications.(12)

These compounds were able to support the neurotransmitter and neuro-endocrine systems, help the brain to form new neurons, and protect against oxidative stress and inflammation.(12)

While more research is needed to confirm the use of lion’s mane as an anti-depressant, it seems as though it might be able to offer up a natural alternative to anti-depressant medications, without any troublesome side-effects.

Lion’s mane is an antioxidant

Taking lion’s mane can help to protect the cells in your body against oxidative stress.

The normal functions of your metabolism produce free radicals. These are tiny unstable molecules which can whizz around your body, causing cell damage and disease.

It’s perfectly normal to have a few of them in your system. Fortunately, your body can usually neutralize them before they cause significant damage.

However, environmental factors like smoking and pollution can mean that more free radicals are present in your body, and your system becomes unbalanced. This is called ‘oxidative stress’.

Eating foods containing antioxidants can help your body deal with these extra free radicals. There are lots of different types of antioxidants in different foods, and they work in different ways. However, they all have the effect of protecting you from oxidative stress and subsequent disease.

A 2019 study found that extracts taken from lion’s mane had a neuroprotective effect in mice, thanks to their ability to reduce the number of free radicals. They also reduced the level of nitric oxide in the mice’s brains, which in turn had an anti-inflammatory effect.(13) 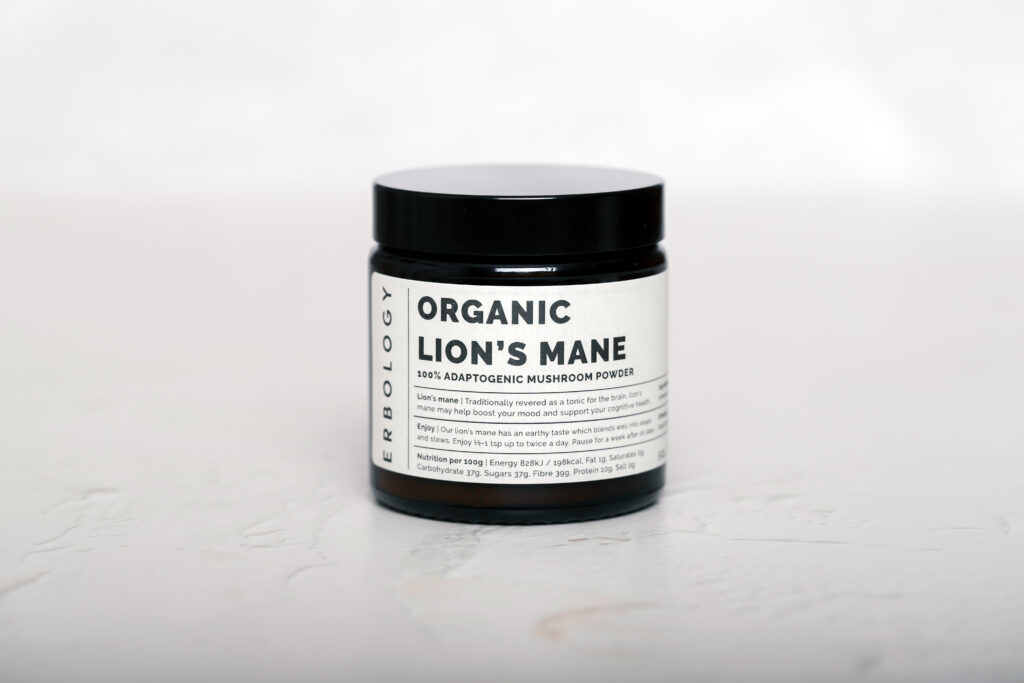 It seems that modern scientific research is beginning to substantiate the health benefits of lion’s mane, especially when it comes to brain and cognitive health.

While most of the research available around lion’s mane is currently based on ‘in vitro’ experiments or animal testing, the results look very promising indeed.

There certainly seems to be a link between consuming lion’s mane and some level of protection against diseases of the brain, such as dementia, depression and cognitive impairment. However more studies in humans are needed before we can be absolutely sure.

There’s also evidence that it can help support your gut health. It also appears to work as a powerful antioxidant, protecting you against oxidative stress and some forms of disease.

Unsure of how to take lion’s mane? It’s easy to take in the form of a tea, powder, or mixed into soups, stews and smoothies. If you’re thinking of trying it, don’t forget to choose an organic product to avoid any chemicals or pesticides making their way into your food. 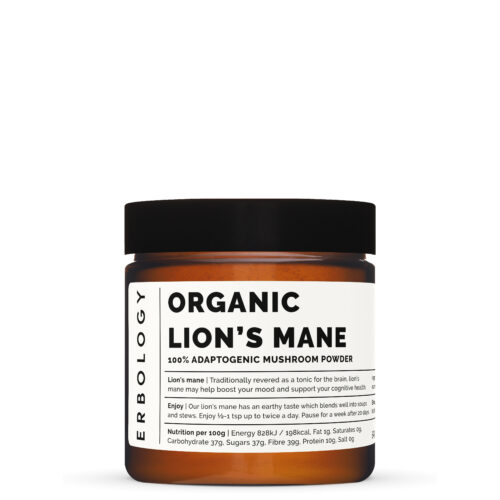 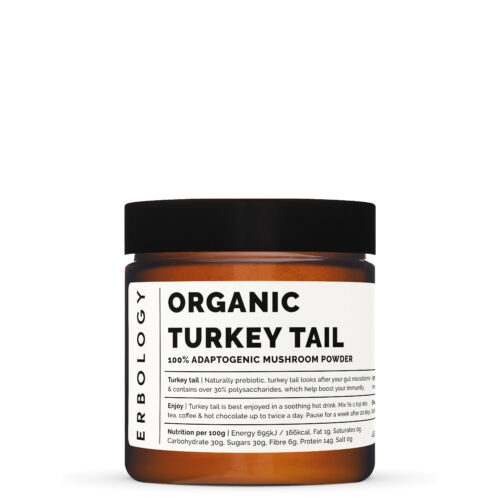 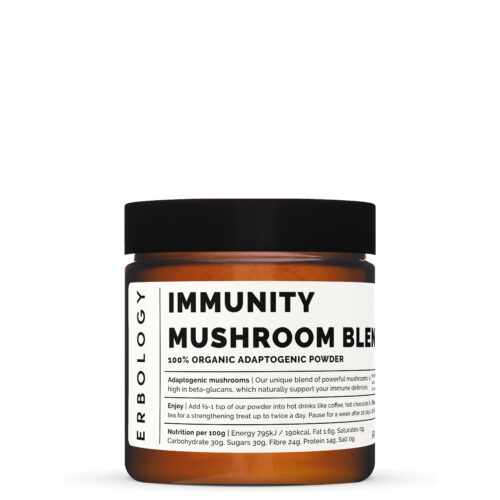 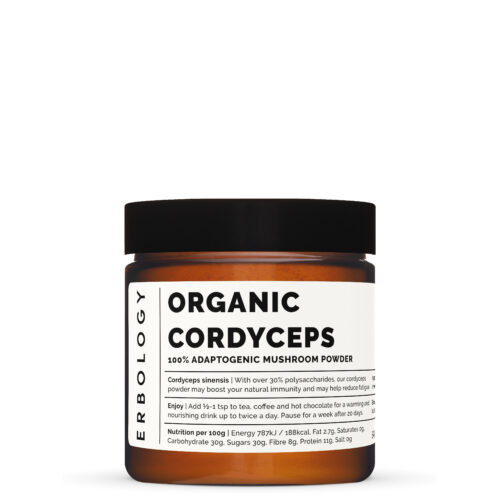 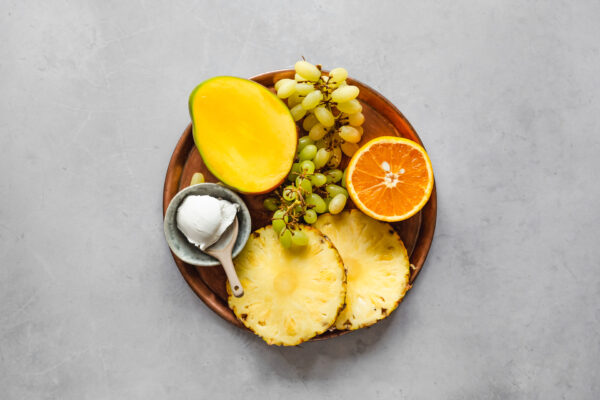