As the renowned Bulgarian writer Elias Canetti once said, “you have but to know an object by its proper name for it to lose its dangerous magic". This quotation could have been meant just for the milk thistle. There is nothing milder than milk; but when you learn that this plant has been called the holy thistle for years and years, then some of the ‘dangerous magic’ of milk thistle – which is actually beautifully healing for the body, and especially cleansing for the liver, – comes flooding back.

Milk thistle or Silybum marianum has an exquisitely spiny round that is crowned with purple. A gentle white dusts the very edges of the lavender flower. According to folklore, the white bands on the leaves first emanated when a dewdrop of the Virgin Mary’s breast milk fell on the plant while she was nursing as escaping Egypt – also giving forth to many of its names and nicknames alike. The natural home of the holy thistle is, quite appropriately, the Mediterranean, where it forms brush on rocky slopes. Milk thistle benefits are quite impressive. You can eat the entire plant – the leaves and stalks of the milk thistle plant as a vegetable, and the heads boiled, similarly to artichokes. The seeds are ground into milk thistle powder and can also be used as a coffee substitute. 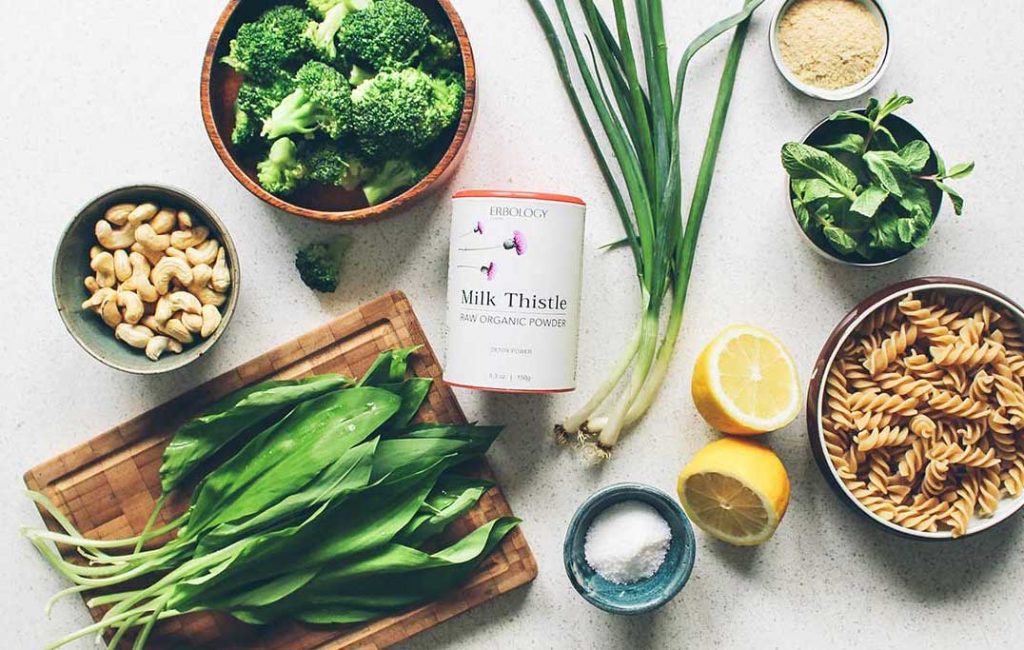 Milk thistle is a source of silymarin.

Leading on from its Latin name, the most prominent plant compound found in the holy thistle is silymarin. It is made up of raw flavonolignans that form a very effective antioxidant. A wide range of research shows that silymarin acts to block the reception of toxins in cells, reduce fibrosis, and combat free radicals; the benefits of milk thistle are specifically and potentially very helpful when used for liver health. It is the most researched plant therapy for the healing of liver diseases.(1)

Silymarin is generally considered safe. However, further research is required and it is advisable to consult your doctor before taking silymarin while you are pregnant.

Milk thistle could be quite a blessing indeed for the liver, given that the range of liver ailments that it has shown to be effective in helping to heal include alcoholic liver disease, non-alcoholic fatty liver disease, hepatitis, fatal toxins such as those produced by deadly mushrooms, and liver cancer.(2)(3)(4) The detoxifying benefits of milk thistle have been passed down through the generations. And, we love its cleansing powers in this world sad with toxins and free radicals.

However, there have also been other studies that did not show the same results. And conclusive research is needed before any firm statements about the detox potential of milk thistle for the liver is needed. How much milk thistle should be given to aid illnesses of the liver and for how long also needs to be looked into further. 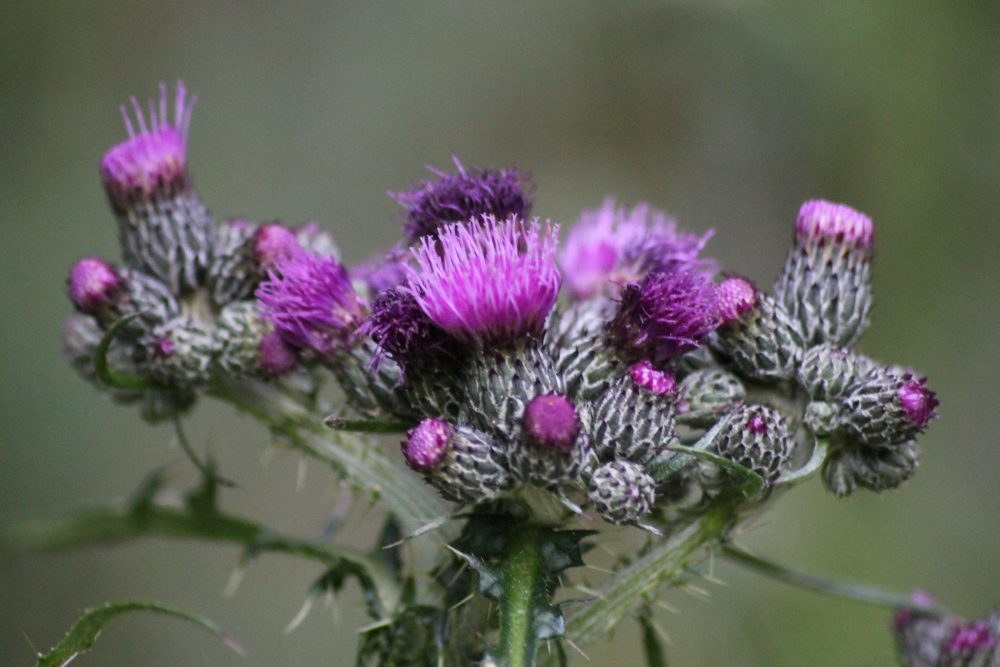 When cold-pressed, milk thistle seeds make for a lovely oil rich in linoleic acid. It is  an essential omega-6 fatty acid which we need to obtain through diet. It also boasts an abundance of vitamin E. This powerful antioxidant strengthens the skin and eyes and helps sustain the all-important immune system. As with all vitamins, it is best to obtain vitamin E through the diet rather than via supplements. However, you can best obtain the full benefits of silymarin through the use of milk thistle powder rather than the oil. 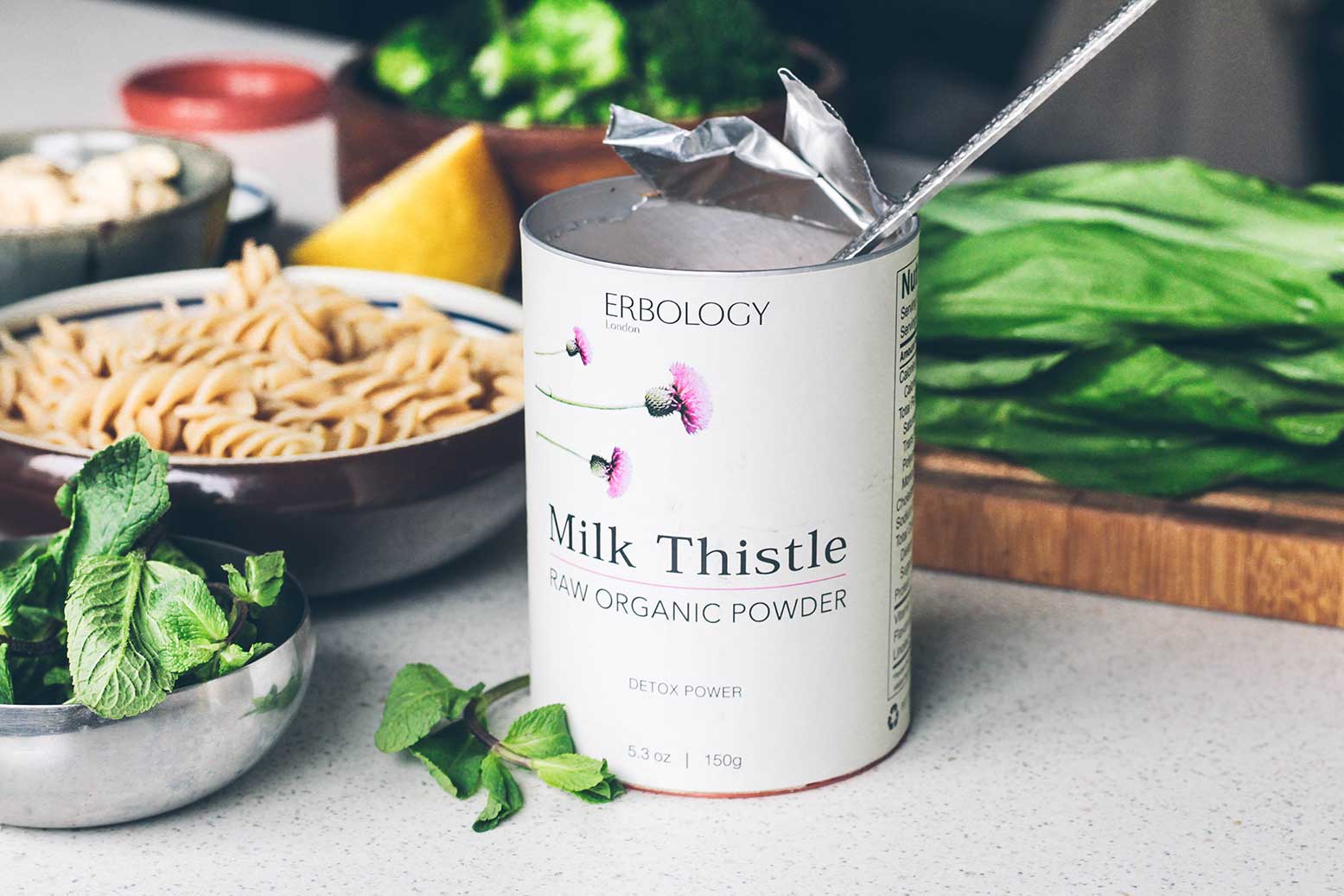 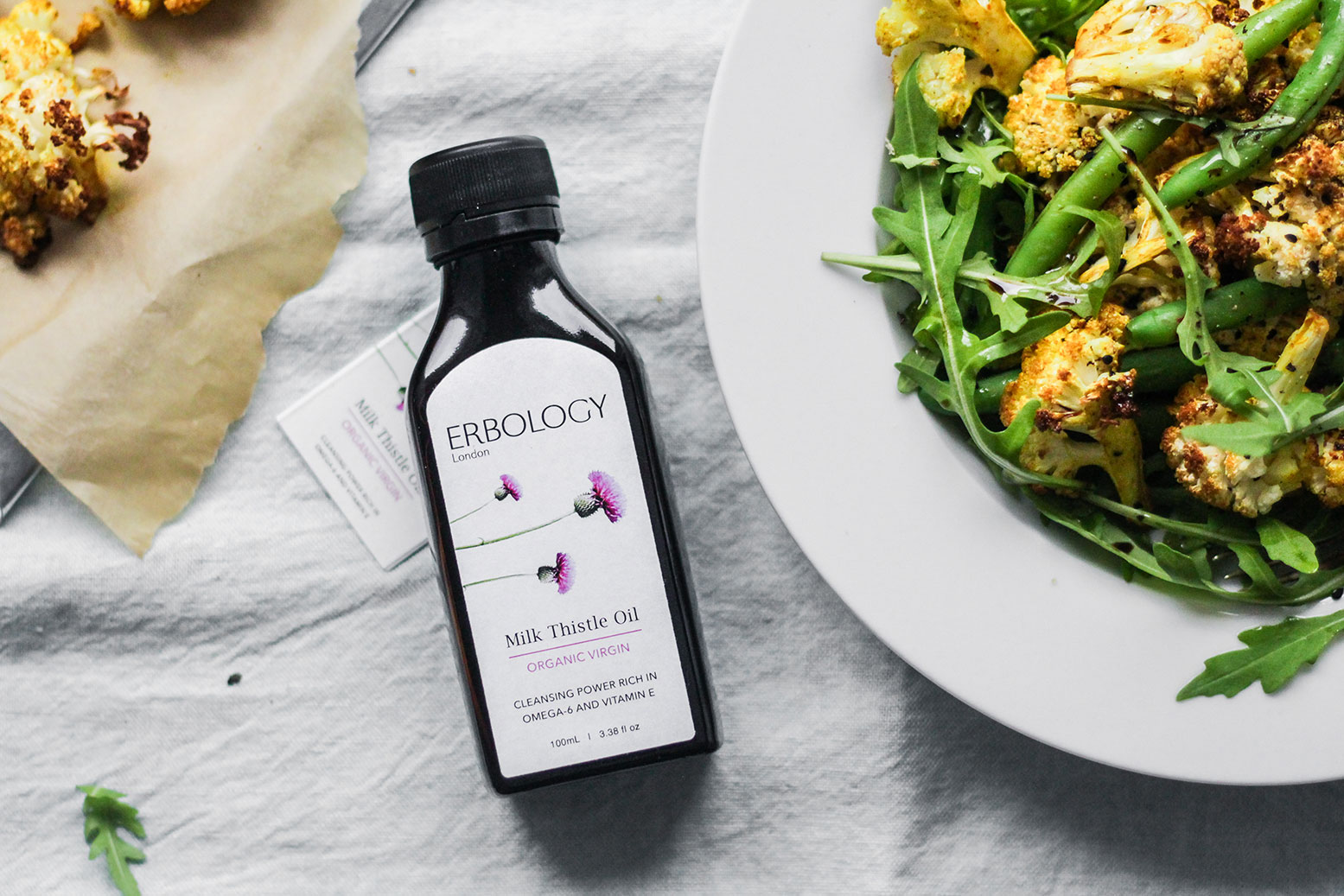 "Milk thistle could be quite a blessing indeed for the liver"

Milk thistle benefits for the brain and heart

Another way that milk thistle has traditionally been used is to treat disorders of the brain; for two thousand years, it has been administered to those with Parkinson’s and Alzheimer’s diseases, among others. Silymarin has anti-inflammatory characteristics that add up with its other traits to make it potentially protective of the brain and may help ward off deterioration of the brain due to ageing.(5) Test tube and animal studies hint that silymarin assists the body in accomplishing this by slowing oxidative harm to brain cells.(6) A separate study found that it protected LDL cholesterol against oxidation, a leading cause of cardiovascular disease.(7) Nevertheless, further studies are needed to verify these potentially quite helpful results.

Further possible benefits of milk thistle which have been deemed worthy of scientific study include an ability to help strengthen bones, promoting the production of prolactin. It is the hormone which regulates the formulation of breast milk by the body. Furthermore, prolactin combats the oxidative pressure which causes acne.(8)(9)(10) A study which looked at a group of acne sufferers who took 210 grams of silymarin daily for two months showed that their pustules reduced by 53% over this period.(11)

In a 2014 study, a group of researchers showed milk thistle to mirror the effect of certain diabetic medications, promoting the efficiency of insulin and lowering blood sugar. Milk thistle contains PPARy receptors. These are the molecular targets of clinical insulin sensitisers, used to assist high blood glucose in patients with type 2 diabetes.(12) The holy thistle, the holy thistle! 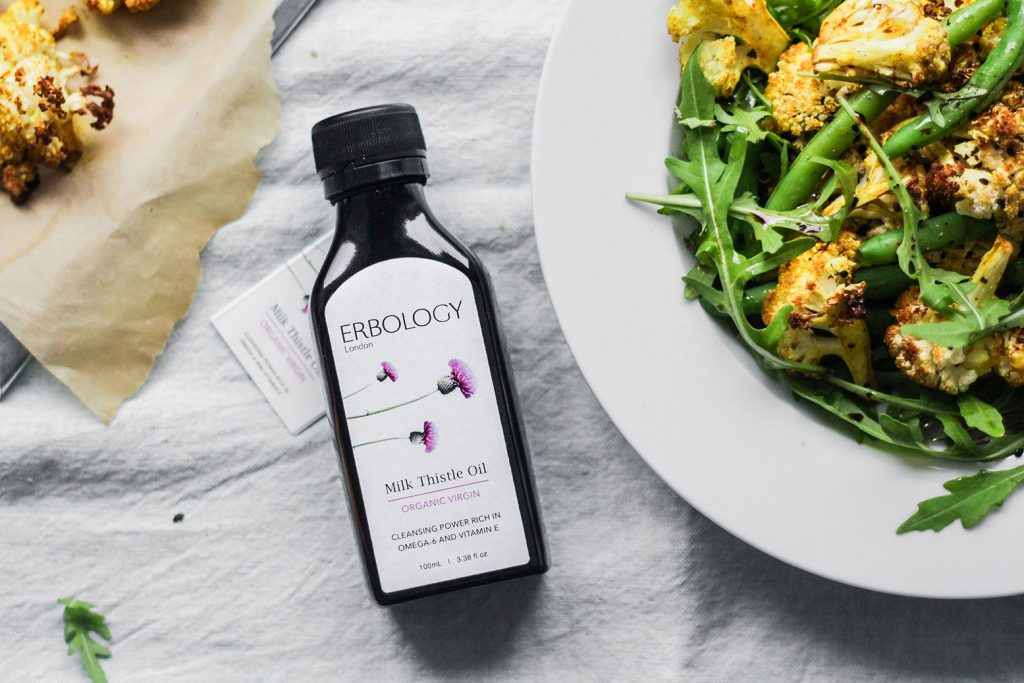 Research has found that reactive oxygen species (ROS) type free radicals have an intensely damaging and harmful effect on the skin. Not only do they heighten the natural effects of ageing, but also promote certain skin cancers. Studies have found that milk thistle has a preventative effect against this type of free radicals. That is why Erbology Cold-pressed Milk Thistle Oil nourishes the skin and aids it in regeneration.(13) We love a simple face scrub made with milk thistle oil, pineapple chunks, and parsley. You could also just apply small amounts of milk thistle oil to your skin and hair in the evening, savoring its gentle effects.

Erbology hand-picks milk thistle and cold presses its seeds to extract the precious virgin oil. Therefore, it is not suitable for pan frying. A spoonful of Erbology Milk Thistle Oil contains over 6mg of Vitamin E, 8g of omega-6, and loads of phytonutrients.

The seeds are ground into raw organic milk thistle powder, which we find is best enjoyed over porridges and yogurts or in smoothies. Per 100g, our powder contains 4.7g of flavonolignans; 25g of protein; and 46g of dietary fiber.

Both Erbology Milk Thistle Oil and Milk Thistle Powder are vegan and clean of any preservatives or genetic modifications. Milk thistle has a delicate, nutty flavor, with a lightly herbal sweetness. It tastes as soft but as wild as its name would suggest; the powder is pleasingly and lightly bitter.

We always have some whole-wheat or gluten-free pasta in the kitchen; whatever the season and weather, it never fails. While we love a classic Italian pasta recipe, it’s also fun to experiment with contemporary ways of eating it. Pasta is such a simple, versatile, and flavorful way to include green-eating ingredients. They have become a regular part of our lifestyle and menus. 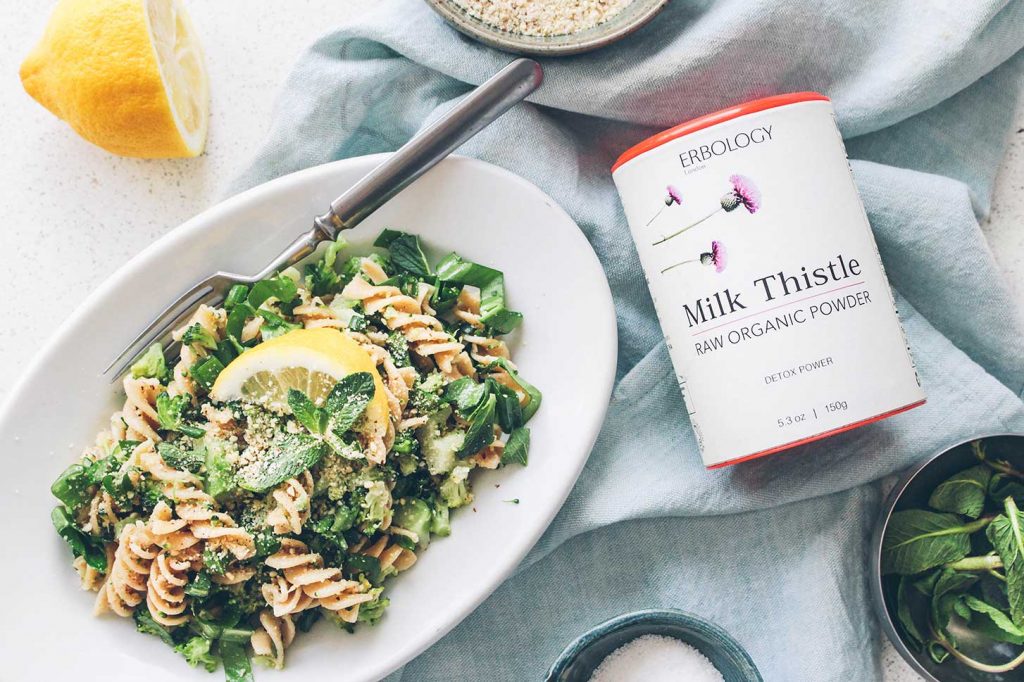 For us, this Ramsons and broccoli pasta dish has the best of both worlds – broccoli, lemon, olive oil, and garlic leaves are indisputably Italian, while a nut pesto with yeast and organic milk thistle powder went a long way towards comfortably familiarizing us with these elements, now staples of our store cupboards. The addition of spring onions and mint make this wonderfully fresh and spring-like, whether you’re eating it outside under the sun or in the depths of winter, wistfully dreaming of eating it under the sun! 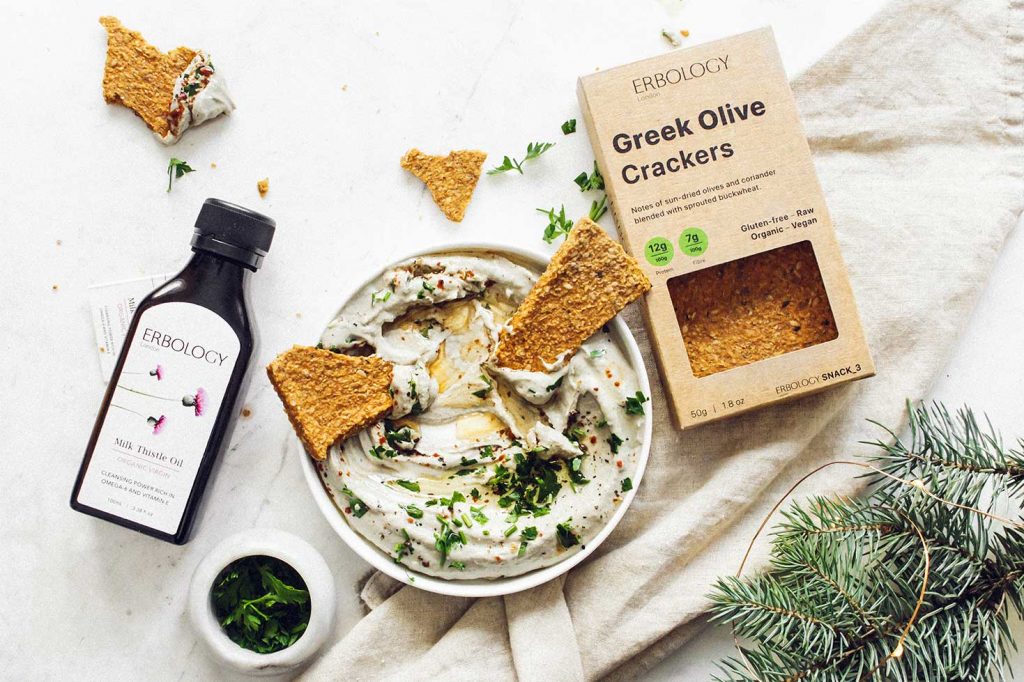 Our Baba ganoush recipe is more time-honored, but no less delectable. It always seems miraculous to us how beautifully aubergines soak up oils and showcase their flavors. Milk thistle originates in the Mediterranean, namely in Greece. So while the nutty flavor of this oil may be less familiar to us than olive oil, it works perfectly and intuitively with aubergines in this dish and adds a new permutation to it. Scooping up the dip with raw, gluten-free Erbology Greek Olive Crackers means you don’t even have to sacrifice any of the olive flavor!

These are just a few of the ways we like to use this ingredient; if you would like further inspiration, a green power smoothie and roasted cauliflower are favorite dishes featuring milk thistle oil. 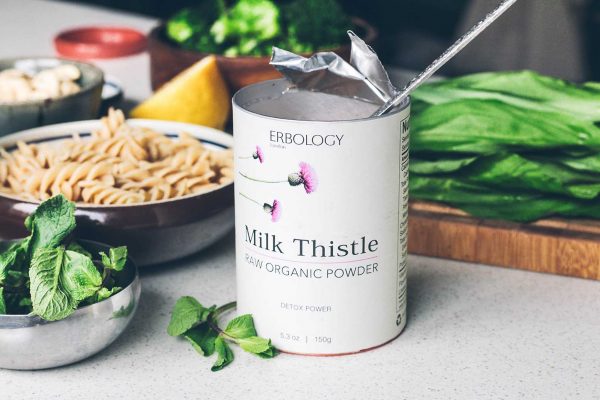 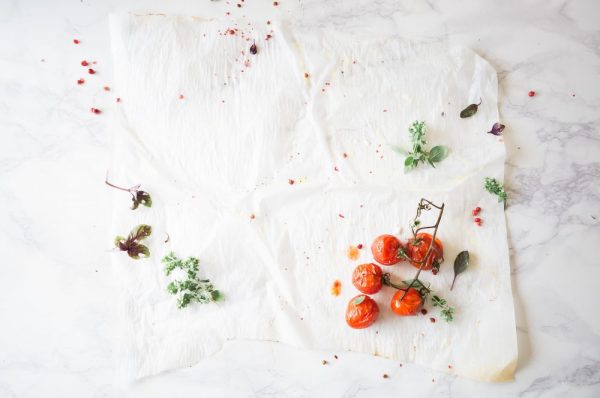 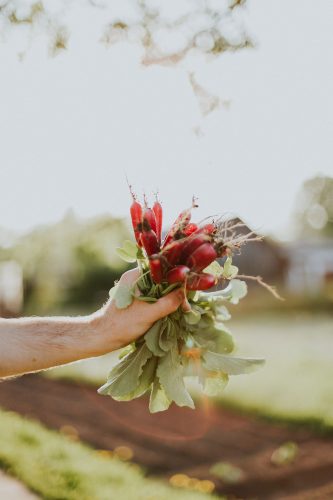 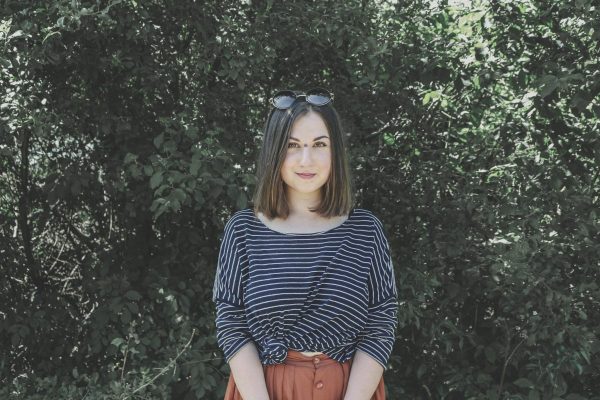 Ana is sharing her favourite cookbooks

Inspired by her grandmother’s cooking, Ana Rusu likes to experiment within the traditional cuisine and make plant-based recipes that are out of this… Continue