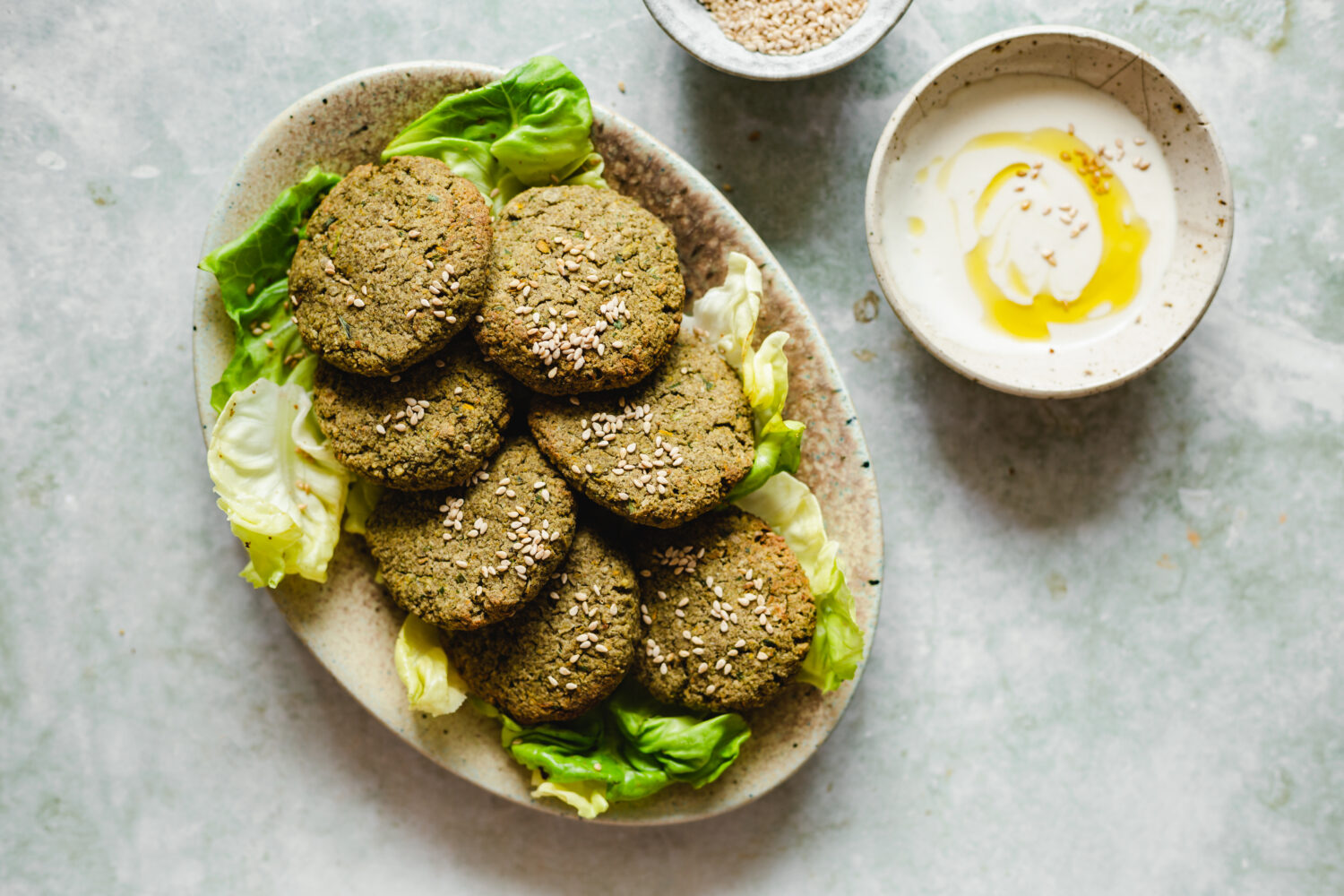 Warm with gentle spices, crisp and crunchy around the edges and packed with healthy protein? That’s a snack we can sign up to. Plus, our delicious baked falafel recipe can be made in the oven without the need for deep-frying!

For a snack so universally loved, falafel has a surprisingly disputed origin story.

Israel has long claimed the falafel for its own. Indeed, the country is synonymous with falafel, and you can get a fluffy pitta piled high with crisp, golden patties from virtually every street vendor.

However, Alexander Lee, in his fabulous article for History Today, throws out quite a few of the rumours about falafel’s origins.(1)

For example, falafel are likely to have come from Egypt, not Israel or Palestine.

Some scholars believe that falafel were invented by Coptic Christians in Egypt as a vegetarian food they could eat during Lent. However, Mr Lee (who is a fellow at the University of Warwick) has little time for that theory either. ‘Falafel’, he says, ‘is most definitely not a Coptic word.’

So where did these delicious nuggets come from? The answer is rather vague. Lee posits that British officers occupying Egypt in the late 1800s might have influenced their development. After enjoying fried vegetable croquettes in India, perhaps they asked their Egyptian chefs to come up with something similar?

Alas, we’ll never know for sure. But we do know that falafel soon spread through the Middle East, acquiring new flavors from each region it touched. 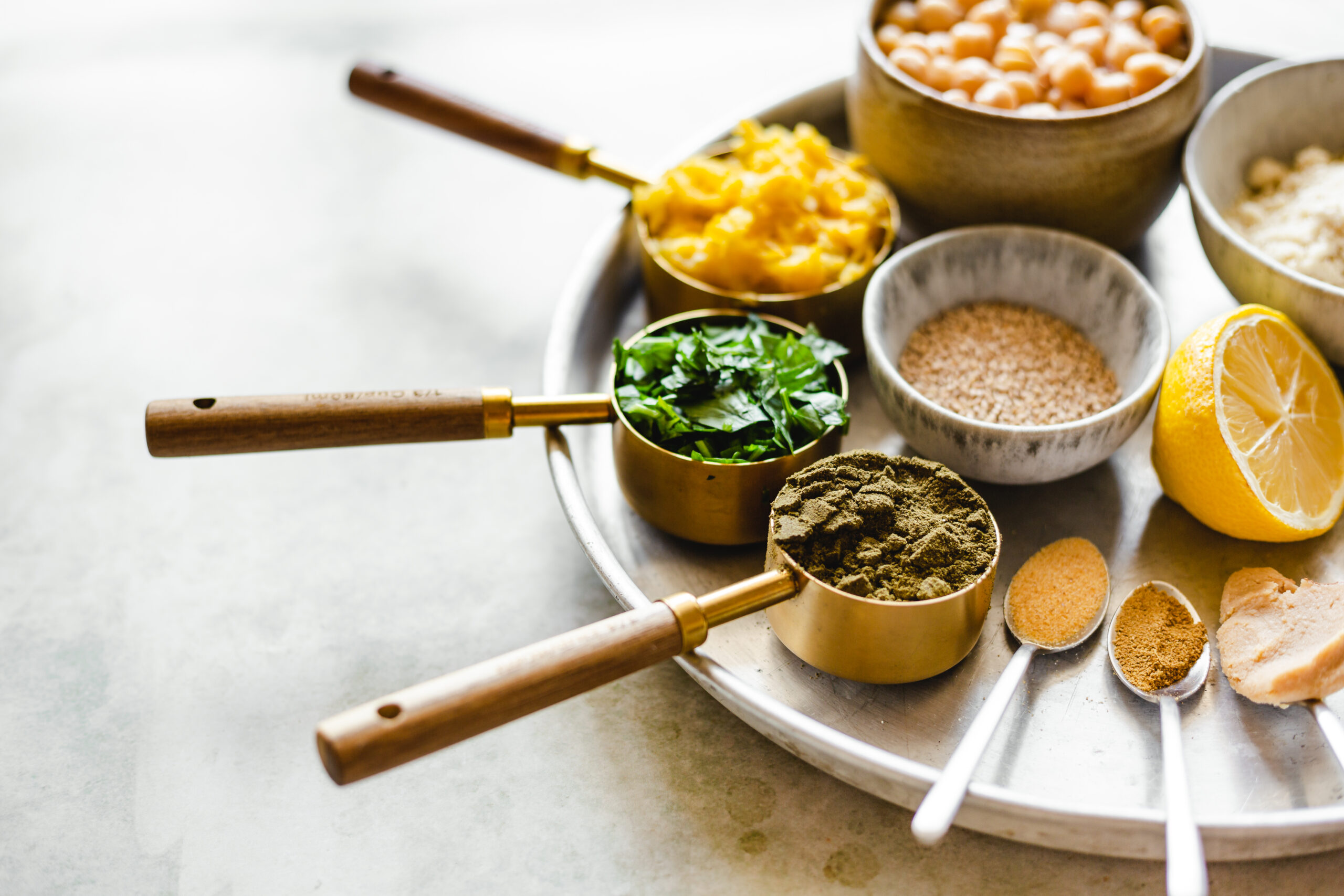 Falafel through the ages

A very early falafel might have been made of fava beans. Indeed, that’s where falafel probably gets its name; the Egyptian word for fava beans is fül.

As any recipe travels, the locals tend to tweak it to reflect their own tastes and the ingredients that are most readily available. This may be why we now associate falafel with chickpeas, which were substituted in for fava beans as falafel reached the Levant.

Other nations, including Lebanon and Yemen, also lay claim to the falafel. It is popular across the Middle East, and the different nations and groups are fiercely proud of their own version.

However the falafel has also come to represent the divisions of the region. For instance, some Jewish people who arrived in the 1930s refused to eat falafel, which was considered a classically Arab dish.

Nowadays, the problem has reversed: Israel has taken on falafel as a national symbol, while many Palestinians argue that their families had been enjoying this classic snack long before Jewish settlers arrived. 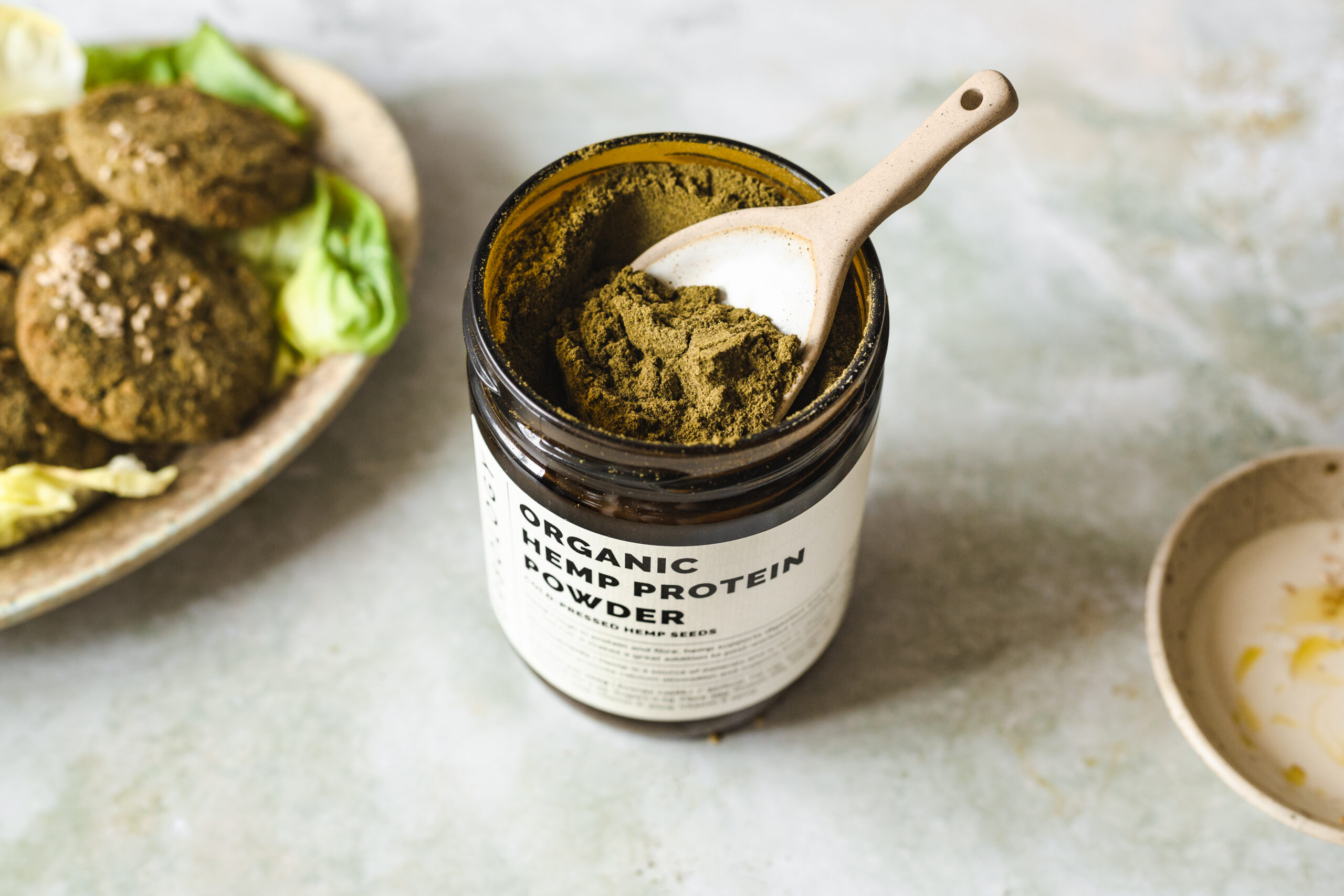 We have diverged from the classic recipe on a number of counts here, but with good reason, we think. The first and most obvious point is that falafel is usually deep-fried, while ours are baked.

While classic falafel are made with low-fat, protein-rich ingredients, the frying process makes them a treat we should probably only indulge in every so often. However, bake them instead and suddenly they’re a dish we can enjoy every day!

Other non-canonical additions include miso paste and hemp seed powder. The miso may be a surprising inclusion, given that it comes from a different part of the world altogether.

However, we find that its delicious umami bass notes help to provide something akin to the earthy savory flavor of the deep-fried originals. You won’t taste the miso flavor; you’ll simply have a falafel that satisfies all your tastebuds!

The second addition is our hemp seed protein powder. 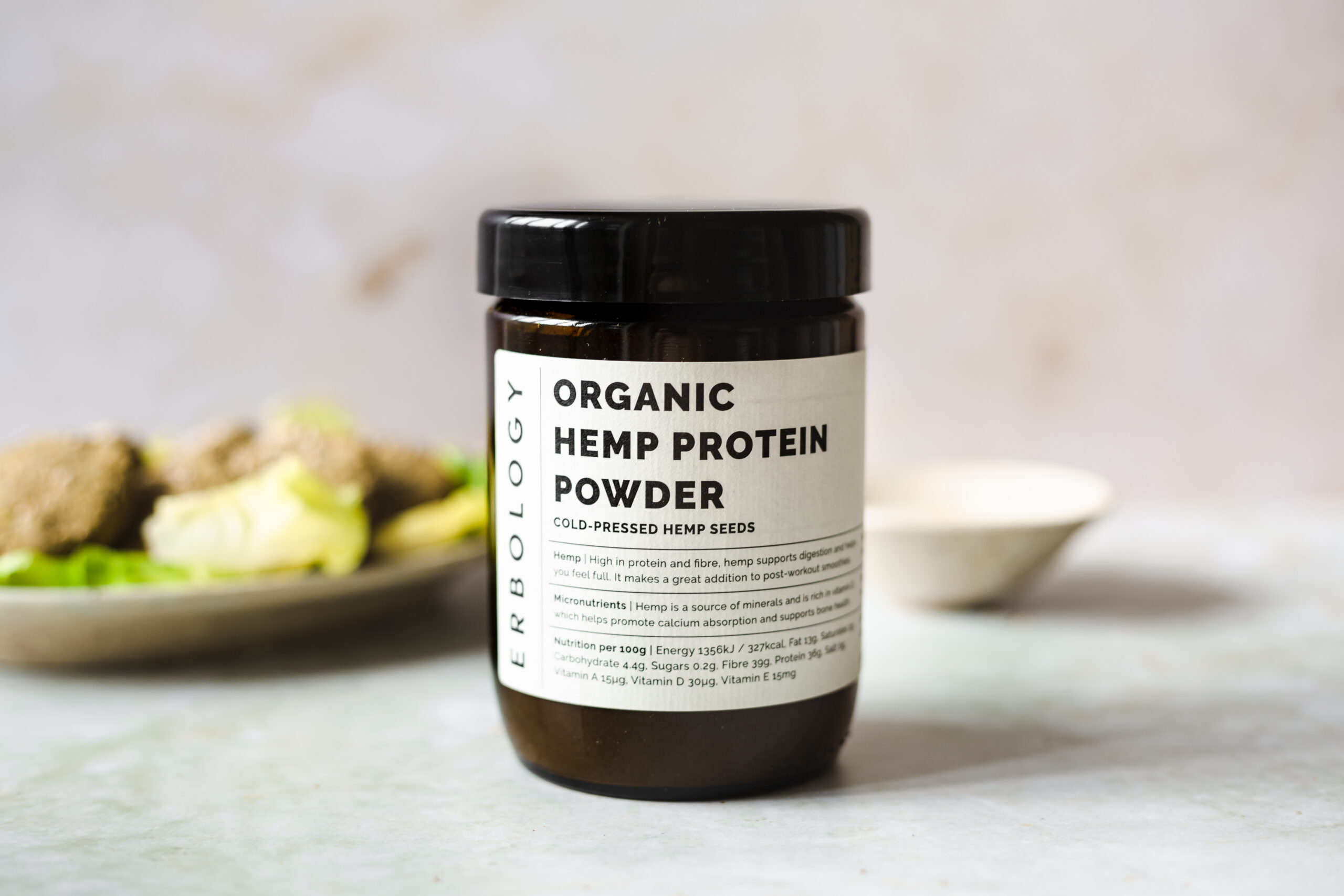 We’ve chosen to add our hemp seed powder as a great way to pack additional protein into our falafel.

While they’re a great post-gym snack already, thanks to the protein-rich chickpeas, if you work out frequently or are trying to build muscle mass a bit of extra help goes a long way.

We shied away from the protein powder craze that took off a few years ago after taking one look at the ingredient lists. Many of the options on offer were ultra-processed, stuffed with artificial sweeteners and flavors, and often not suitable for vegans.

Thankfully, the plant world has plenty to offer in terms of natural protein options. Our Organic Hemp Seed Protein Powder is made from nothing but pure hemp seeds. It provides an impressive 36g of protein in every 100g of powder, or around 8g of protein per 23g serving.

Even better, it has a mild nutty flavor that you can blend into just about anything. We love to swap out a spoonful of flour for our hemp seed powder when baking breads and muffins and whizzing it into our smoothies. All with no sugar, sweeteners, preservatives, chemicals or any other nonsense that turns up in processed protein powders – and it’s just as convenient. 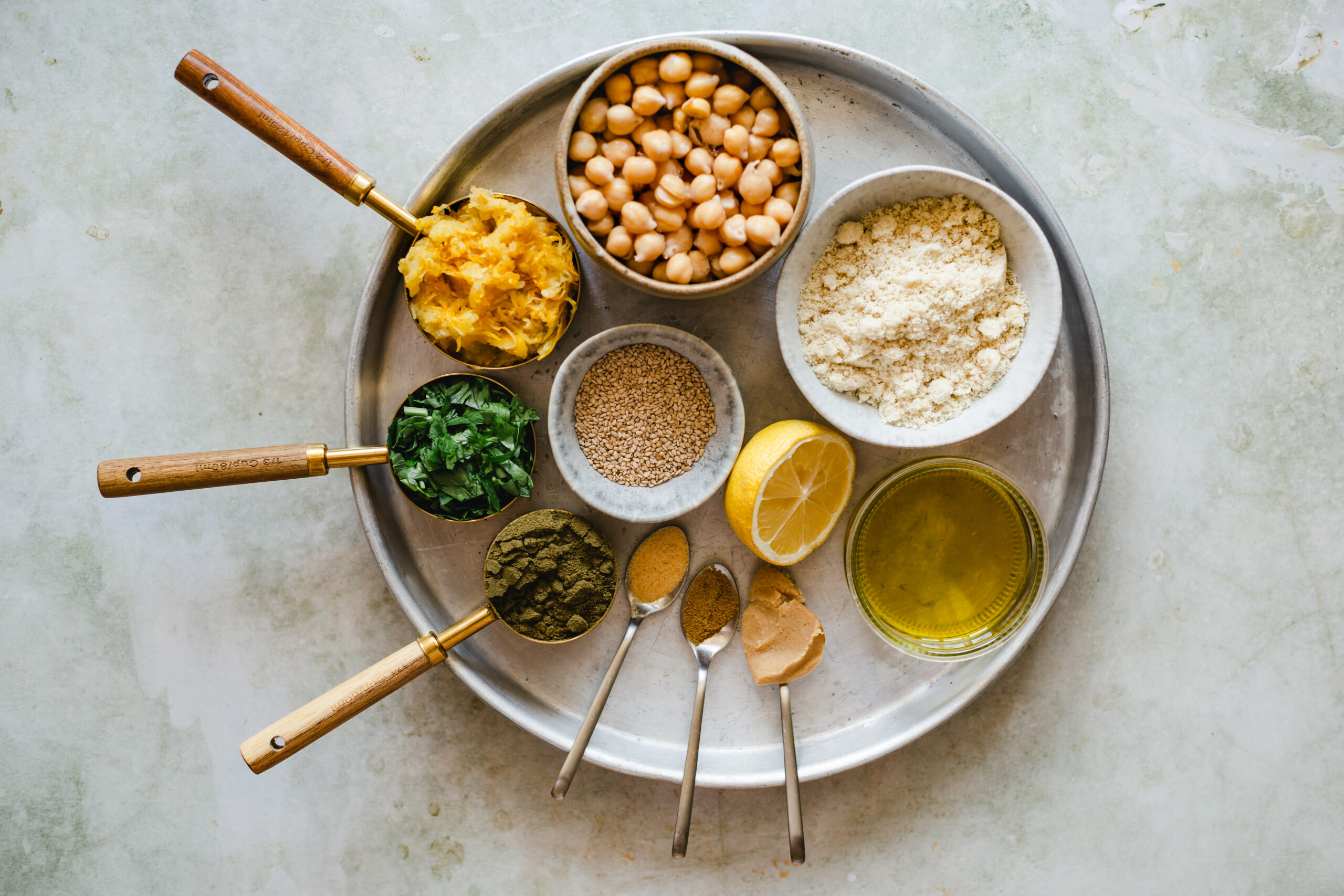 How to enjoy our baked falafel recipe

Falafel are one of those rare foods that somehow work in any situation. Grab a couple cold as a snack, or pop inside your lunchbox on the way to work.

Something more substantial? Serve hot, with a fresh salad of cucumber, tomato and herbs, and drizzled with our addictive tahini dressing.

Or, open up a freshly baked pitta and stuff with falafel, herbs, salad and tahini and enjoy the deliciously messy results.

If you’re making these for a crowd, you could also serve a few Middle Eastern-inspired dips alongside such as our artichoke hummus or aubergine baba ganoush.