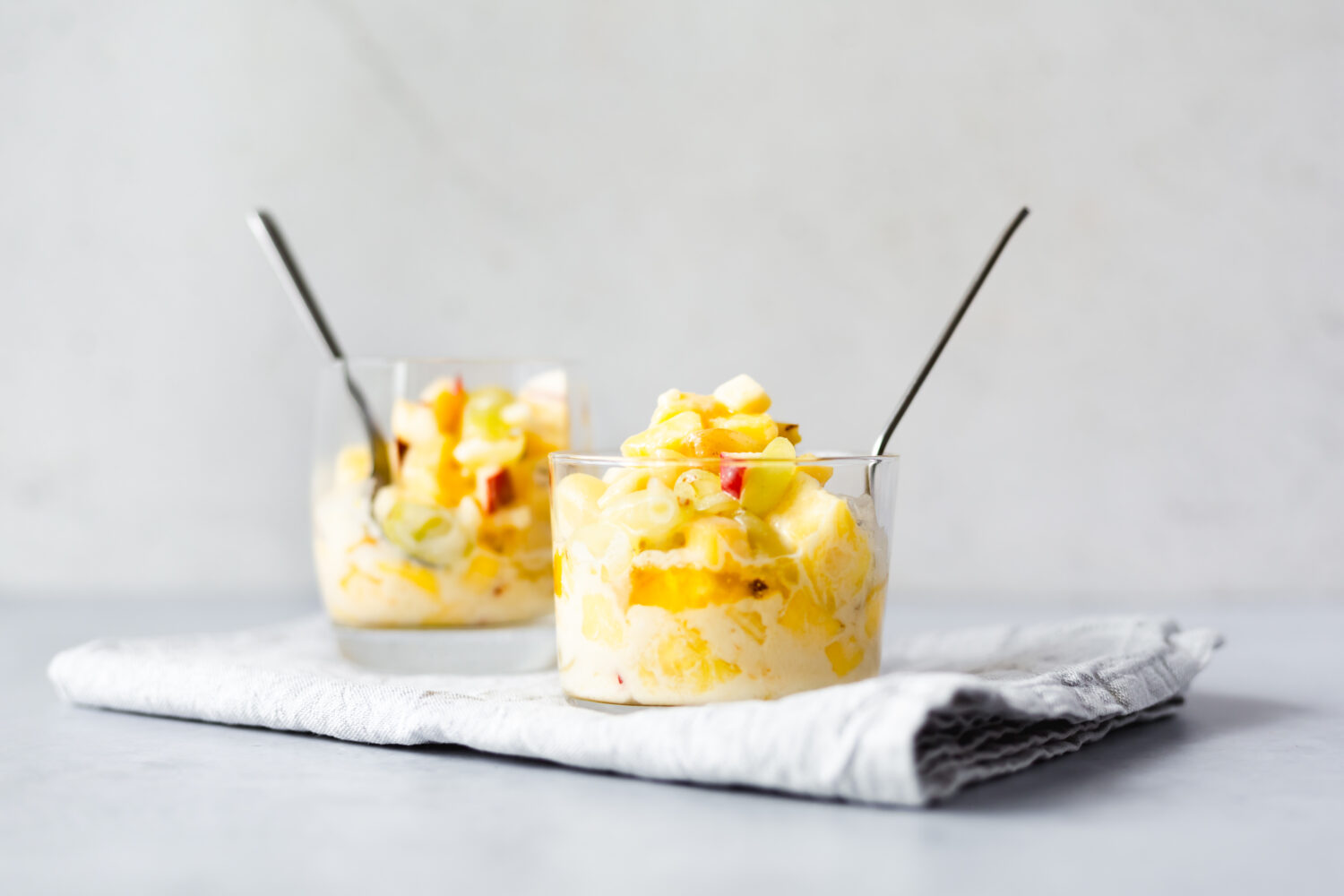 This fabulous Filipino fruit salad is a staple at Christmas and other celebrations. Our healthier version, made lighter with fresh fruit and whipped coconut milk, is vegan-friendly and perfect to serve at parties, or after a family dinner.

What is Filipino fruit salad?

As we’ve taken some liberties with the classic recipe here, let’s start off by explaining what a traditional Filipino fruit salad entails.

Usually this sweet and creamy dessert is made with canned fruit cocktail. The fruit is bound together with sweetened condensed milk, and possibly cream cheese.

As with so many family favorites, the variations on this basic recipe are innumerable. Some people swap out the fruits, adding in fresh apple or canned lychees. Others bring in unexpected ingredients including corn, cheddar cheese, coconut gel and maraschino cherries (although not necessarily together!)

It seems that every family has their own version of this classic fruit salad, so we don’t feel too bad about adding our own recipe to the collection. 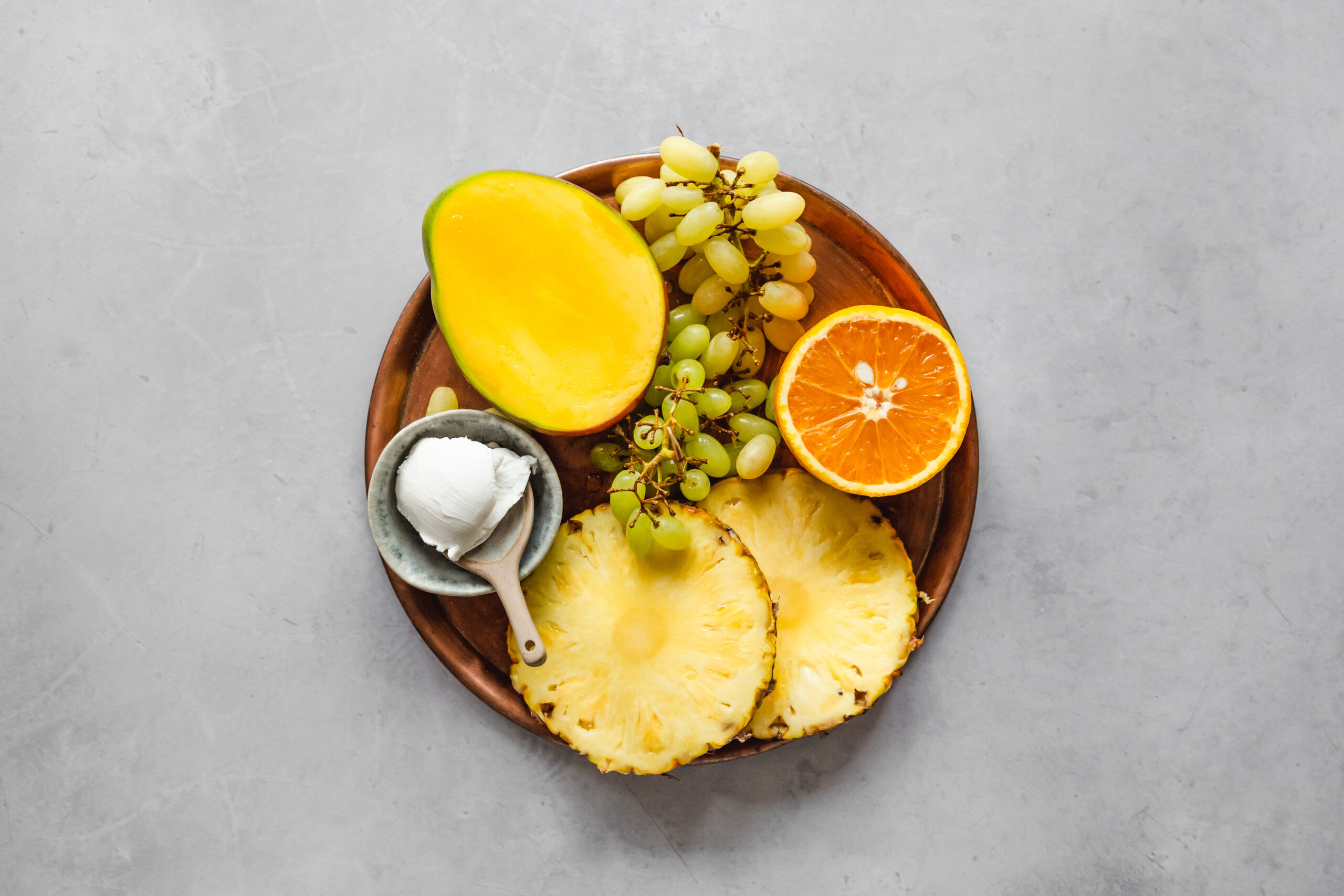 Where did Filipino fruit salad come from?

According to Casa Veneración, a Filipino recipe site and blog, Filipino fruit salad likely originated thanks to the influence of US soldiers in the Philippines.(1)

After World War II, a few American army bases remained in the Philippines. These needed to be stocked with US foods to give the soldiers a taste of home. Any surplus was sold at the army PX (post exchange) stores and was available for local people to buy.

However, the prices of imported foods were quite high, so items like canned fruit cocktail were reserved for special occasions. This is perhaps why Filipino fruit salad is such a ubiquitous sight at celebrations and family gatherings.

It may also share ancestry with a similar fruit salad from the southern states of the USA, called ‘ambrosia salad’. However, this version differs in that it contains ingredients like whipped marshmallow, whipped cream, and pecan nuts. It can also be served alongside a savory main course, such as Thanksgiving dinner.(2)

In short, by this point the name ‘salad’ doesn’t really imply anything healthy!

Among the great many individual variations of this fruit salad, a few have risen to prominence. Buko salad, for example, is made along similar lines but features young coconut (buko).

As you can see, there’s plenty of space to be creative with Filipino fruit salads; the only real requirement is the sweet and creamy binding! 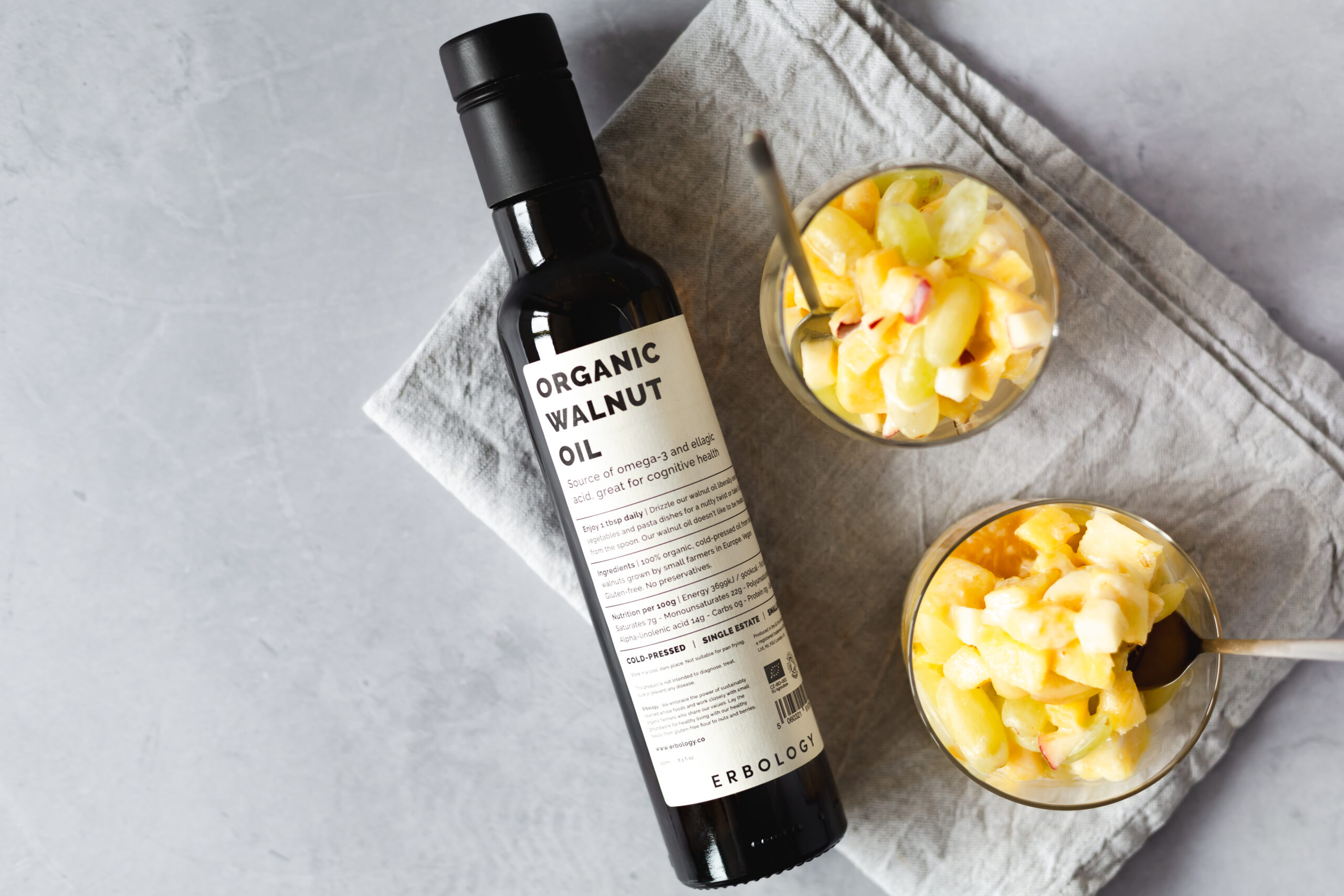 Our version of Filipino fruit salad

At Erbology we wanted to create a version of this delicious holiday dessert which was vegan-friendly and free from ultra-processed foods.

While you could use canned fruit for this (avoiding those housed in sugary syrup), we prefer the texture and bite of fresh fruit.

Really, you can use any fruit you like, so feel free to swap out any that don’t appeal. Banana would be a nice addition, or you could swap in pear for the apple.

When it comes to the sweet cream used to bind the fruit together and create that characteristic thick texture, whipped coconut milk was the only option!

Not only does its lightly tropical flavor complement the other fruits, it also acts as a nod towards the buko salads so popular in the Philippines.

An important note here: use the thick kind of coconut milk which comes in a tin. This won’t work with the thinner kind you can get in cartons.

To whip it up to its frothy maximum, the key is to chill, chill and chill again! If the milk gets warm, it will deflate and refuse to hold any air bubbles, so keep everything as cool as you can.

Firstly, chill the tin of coconut milk in the fridge for at least 24 hours. You are aiming for the thick cream portion to separate from the watery part of the milk. Once that has happened, scoop out the cream (leaving the watery part behind) and pop it into a chilled mixing bowl.

Hold onto the water to use in a smoothie or a different dessert.

Then simply use an electric whisk to froth up your coconut cream. Mix in with the fruit and keep the lot in the fridge until you’re ready to serve. 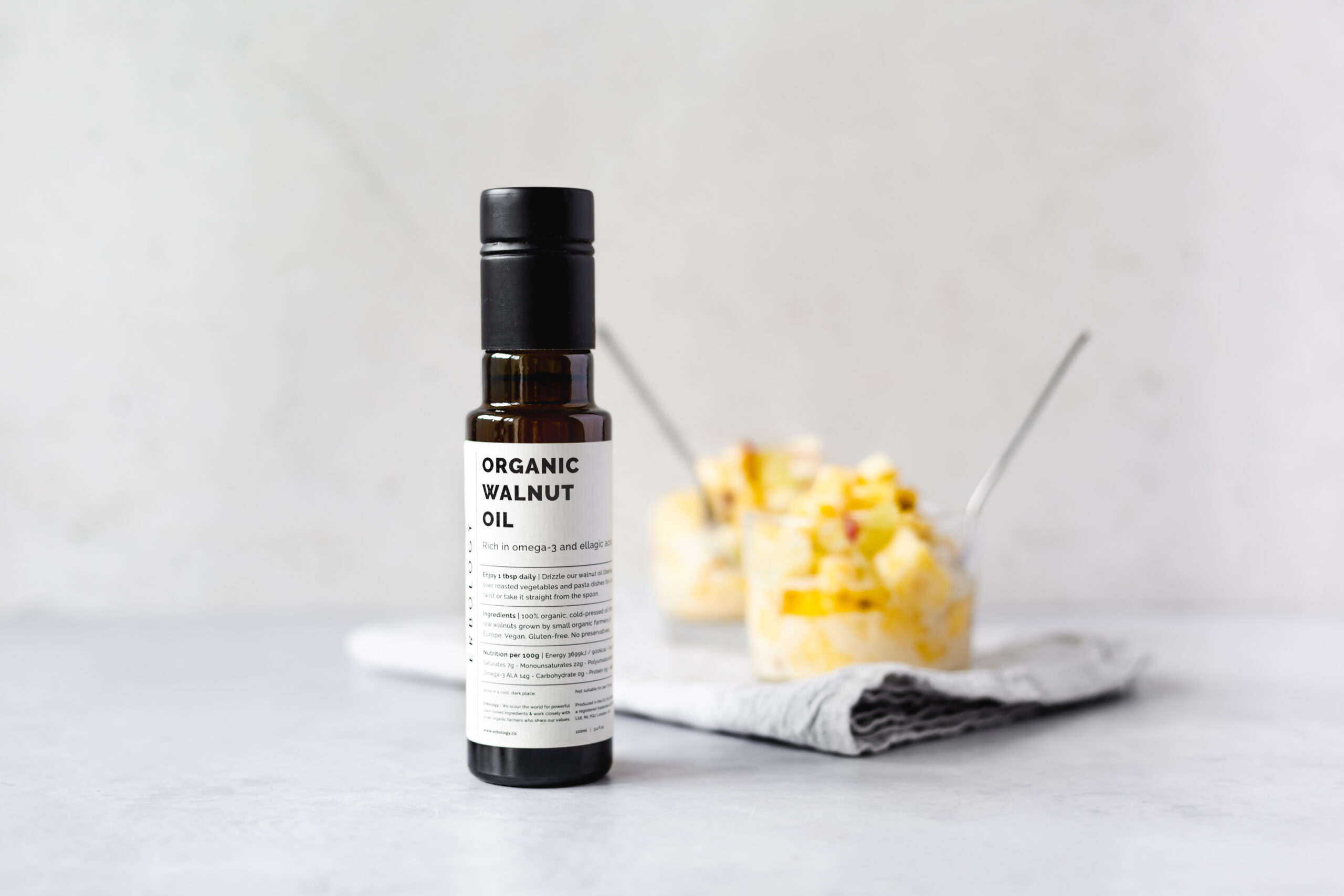 This nutty extra addition has two inspirations: firstly, the crushed pecans used in the American version of the dessert, and secondly the fact that it’s exceptionally good for you.

Walnut oil is naturally rich in omega-3s, which are vital for brain and heart health. This is especially useful for those following a vegan diet, as many people get their omega-3s from fish. Luckily, there are plenty of plant-based sources, and walnut oil is an excellent option.

It contains a form of omega-3 called ALA, which your body is able to convert into the ‘ready-to-use’ version, DHA.

Walnuts contain ellagic acid, too, which defends your cells from damage caused by free radicals.

Just a drizzle on top of your salad adds nutty flavor and loads of health benefits.