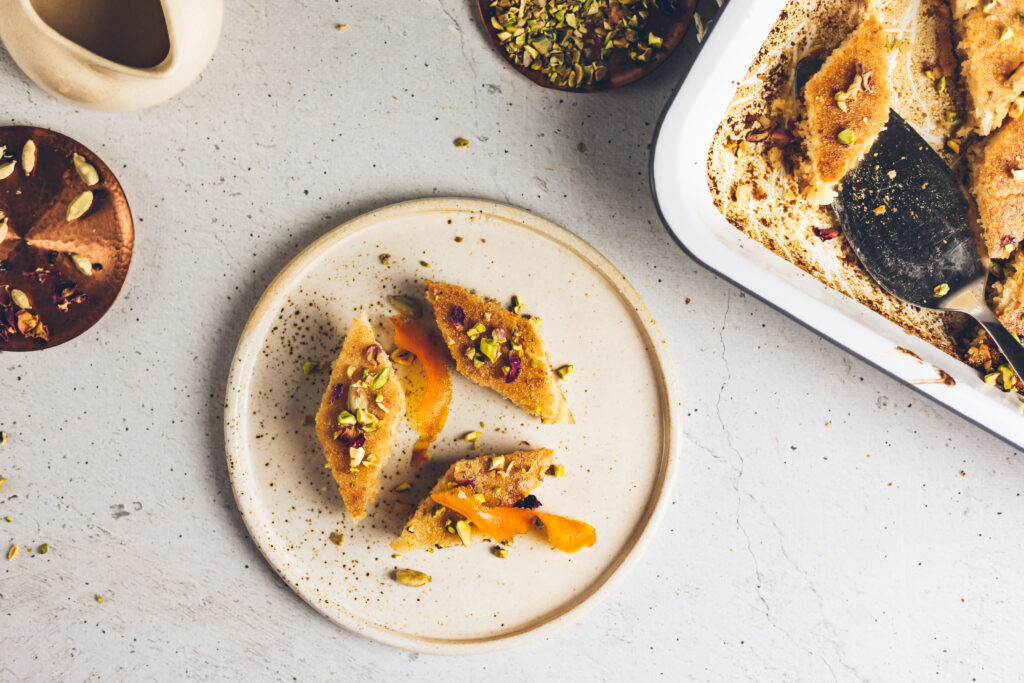 Our rose and pistachio cake is unusual, delicious, and inspired by a fabulous love story. What’s not to like?

Legend has it that, once upon a time, a woman fell desperately in love with a Persian prince. In order to win his heart, she invented a recipe so delicious, so infused with love in every bite, that he could not help but fall for her. The result was the Persian Love Cake.

Despite the legend, there isn’t too much evidence that the Persian love cake – which is a cake usually made from pistachio, semolina and rose – is actually Persian. Some have suggested that it’s a sort of fusion recipe; European methods combined with Middle Eastern flavors.

Indeed, it’s quite difficult to track down its origins at all. But nonetheless, the rose and pistachio cake has survived because it brings two wonderful, aromatic ingredients together in a sticky, delectable cake.

Thus, even though its origins (like the nature of love) remain a mystery, we can appreciate it as the globetrotting crowd-pleaser that it is: fragrant, moist and decadent. 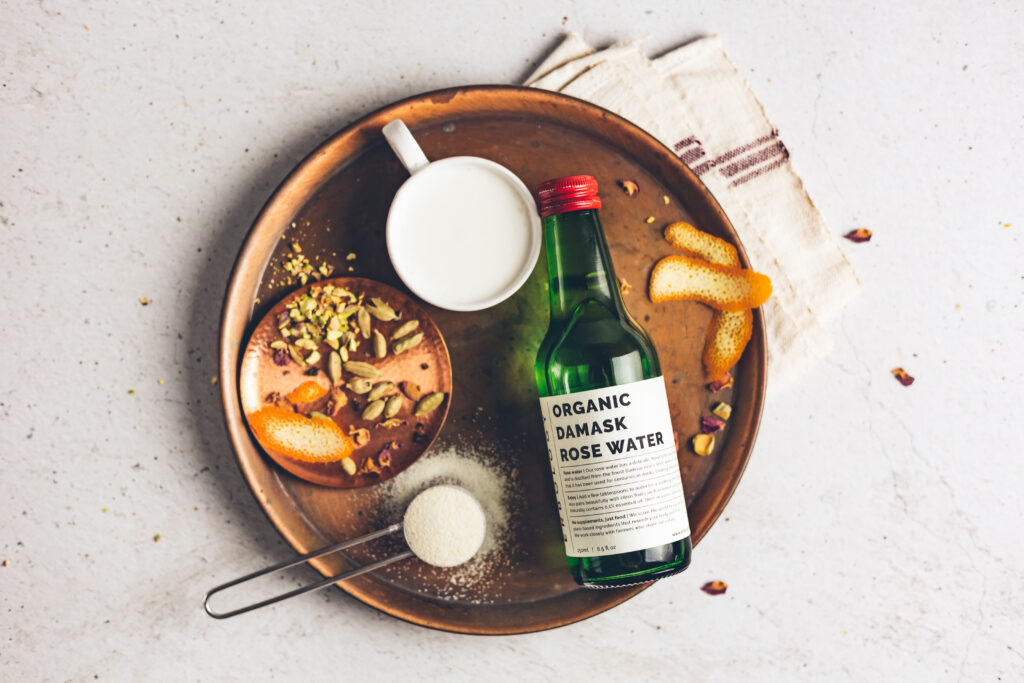 Recipes for rose and pistachio cakes vary from place to place, but there are always a few consistent features. The rose and pistachio, obviously, but also semolina flour, cardamom, and some sort of yoghurt or creme fraîche in the batter.

This is a cake which is a bit different from the Western sandwich or layer cake; instead of baking two cakes and sandwiching them together with a filling, the idea here is to soak the sponge in syrup.

As a result, it needs to have a firm enough texture not to simply dissolve when soaked. (And we mean ‘soaked’; this is not a Lemon Drizzle situation, where the syrup is poured and absorbed tentatively. This is a cake which is meant to be saturated.)

Semolina flour is very important for this, as it has much more bite than regular flour. It’s usually made of durum wheat, which is coarsely ground. It isn’t gritty at all, but has the grain size of something approaching soft sand.

When baked and soaked it produces a lovely, fluffy yet sturdy crumb which stands up to the syrup wonderfully.

Cardamom is a classic Middle Eastern flavor, and of course goes so well with rose water. It has quite a strong flavor, and you can omit it if you like, but it does provide a lovely aromatic quality which seems to bring everything together and stop it becoming too sweet.

Yoghurt or creme fraîche adds moisture and density to cakes. In a lot of recipes, it can also stand in for some or all of the fat, making yoghurt cakes a healthier option. 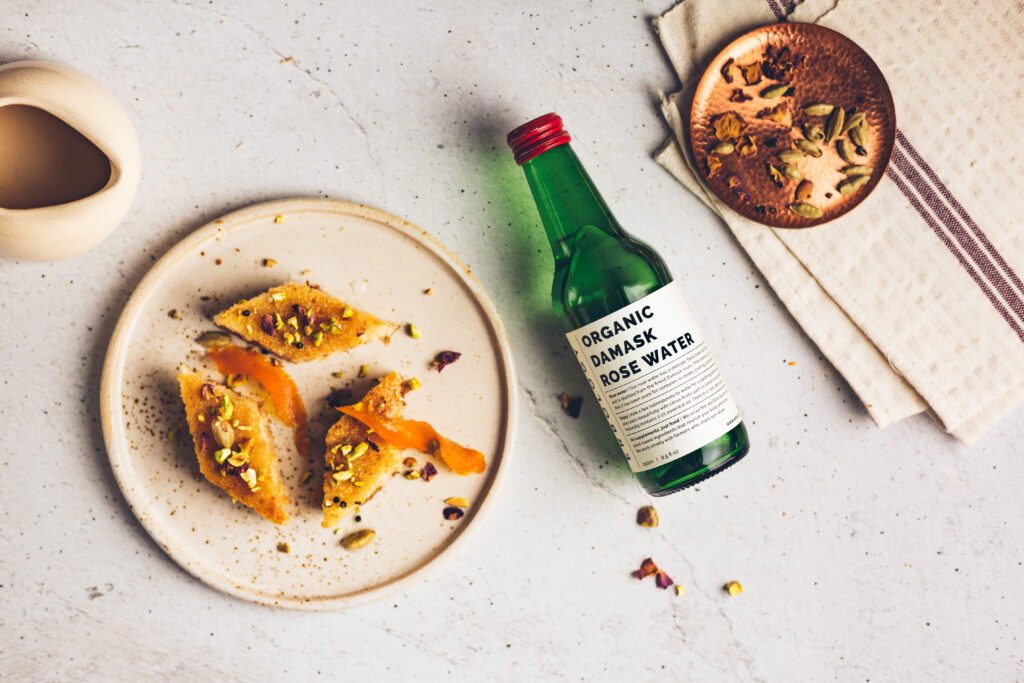 Lots of Middle Eastern treats make use of syrups. Baklava, for example, is soaked after baking in a syrup made from honey and water. Namoura, which is a simple Lebanese semolina cake, is soaked in syrup which can be flavored simply with vanilla or more adventurously with orange blossom water.

The syrup we’ve used here is incredibly simple to make, and just involves heating sugar and water until dissolved, while infusing with some cardamom, orange and rosewater. Then, simply simmer it to help it thicken slightly and make sure all the sugar has dissolved and the flavors melded.

It will also fill your kitchen with the most wonderful aromas, particularly from the rose water. It’s a scent which is considered precious almost everywhere in the world, and having it wafting through the room really calms the mind.

Our Organic Rose Water is distilled from Damask roses. Like Persian Love Cakes, they have a history which is quite tricky to pin down, but in all likelihood they came to Europe via Damascus (hence the name) during the crusades.

Curiously, they are a hybrid rose, meaning that someone must have created it long ago by breeding two species together.

That said, it’s one of the oldest species of rose, and has been sought after for centuries, particularly as its precious oils were (and remain) in demand for perfumery. 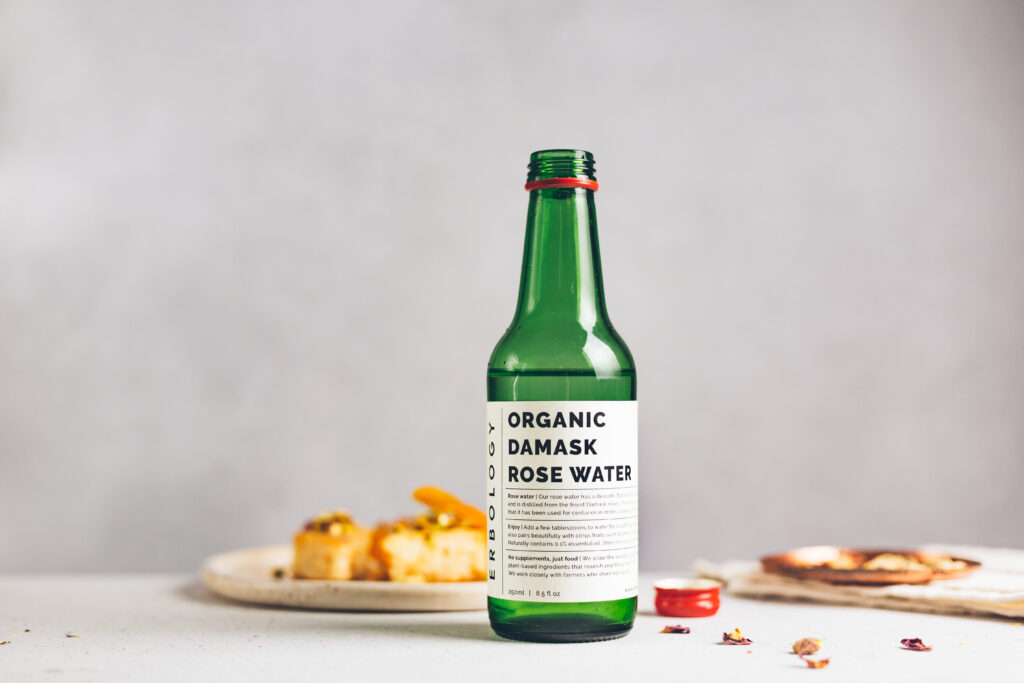 How to serve our rose and pistachio cake

Our recipe is quite flexible when it comes to serving. Here, we’ve chosen to divide the cake up into lovely little diamond-shaped morsels, to be enjoyed with a midmorning coffee.

However, it would be equally well suited to being served in larger slices as a dessert. Serve something light on the side; creme fraíche, or a little good Greek yoghurt, would work nicely.

Other pistachio and rose cake recipes also suggest topping the cake in other ways. One nice variation involves creating a tangy frosting with cream cheese. Alternatively you could finish the cake with a bit of water icing, made with lemon juice. Then top with your sliced pistachio and rose petals as normal.

Fortunately, with its fragrant and lovely ingredients, this is a cake which simply cannot look bad. So, it’s really a matter of mood. Should this cake be a little teatime nibble, or the grand finale to a meal? It’s happy wearing both hats, so choose whichever answers your heart’s desire at the time. 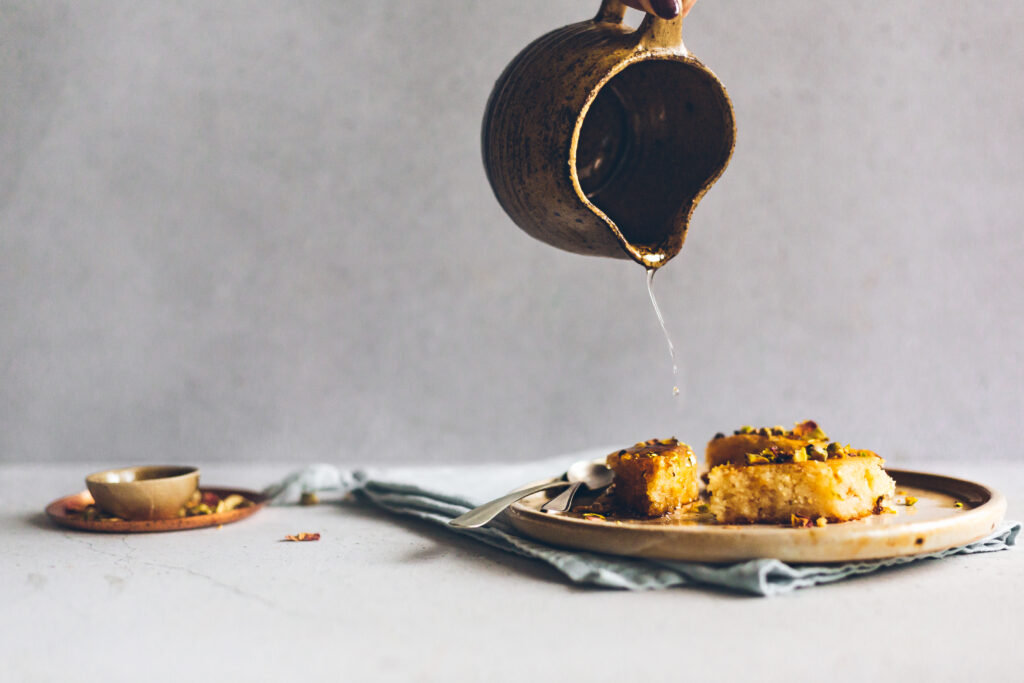 For the cardamom and rose syrup:

For the semolina batter:

For the cardamom and rose syrup:

For the semolina batter: