A soft, fluffy walnut sponge encased in a thick layer of coffee ‘buttercream’, our vegan coffee and walnut cake recipe is sure to please.

Technically, a ‘coffee cake’ is any cake which either contains, or is intended to be eaten with, coffee. However, coffee and walnut is surely the most classic coffee cake there is.

These two flavours are made for each other. Toasty walnut brings out the roasted flavour of the coffee, while the coffee seems to emphasise the hint of natural sweetness in the walnut. Both are deep, complex flavours which add a grown-up edge to a sweet cake.

The traditional coffee and walnut cake is a sponge-based recipe made with butter, sugar and eggs. The filling is usually an American buttercream, which is usually a simple combination of whipped butter and icing sugar. Decadent? Yes. Delicious? Most certainly. Healthy? Perhaps not.

Our aim in creating our vegan coffee and walnut cake recipe was to make a more inclusive version of this teatime favourite. It’s completely plant-based and uses minimal refined sugar, yet retains the fluffy texture of a classic sponge.

Creating a fluffy sponge is no mean feat when eggs are taken out of the picture, but we’ve managed to get a good rise using baking powder and baking soda.

Baking soda reacts to acidic ingredients (in this case, apple cider vinegar and honey) to produce carbon dioxide, which then bubbles up during cooking to create a nice, fluffy texture.

Baking powder is slightly different. It contains both an acid and a base already, and is activated twice; first when it is added to the liquid batter, and secondly during cooking.

Lots of recipes call for both, but why is that necessary if they both do the same thing?

The answer is really about flavour as well as texture. If you were to use only baking soda, you might neutralise all the acid in your bake, but not produce enough of a rise.

If you use only baking powder, you could produce a good rise but be left with an acidic taste from the acidic ingredients left unneutralised in your recipe.

The answer? Use both! 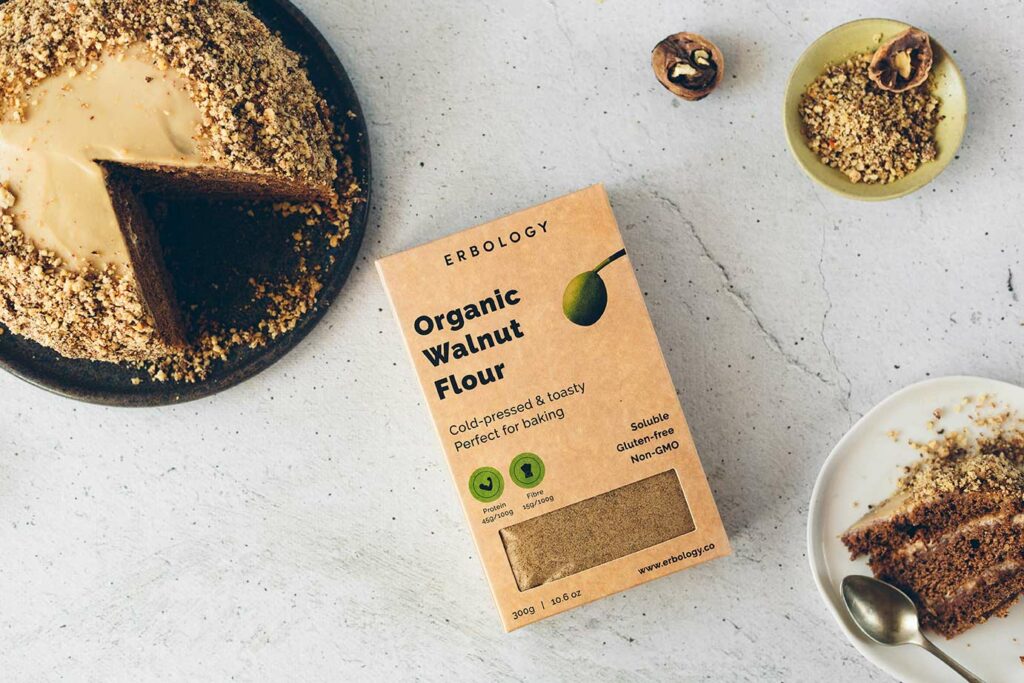 A plain sponge, like a Victoria sponge, is all about texture and sweetness, and as a result is better left as soft and fluffy as possible.

Coffee and walnut cake, on the other hand, benefits from a bit of added bite and the luxury of walnut chunks.

We’ve added walnut flour here for flavour and also to provide a slightly denser texture, while chopped walnuts offer a lovely, crunchy counterpoint to the sponge. Orange zest, another fast friend of the walnut, lifts and lightens.

Almond milk provides the liquid and is also a natural partner for coffee. A handy tip is to have some Erbology Organic Almond Flour on hand in your cupboard. It blends well into baked goods, but also allows you to knock up fresh homemade almond milk in whatever quantity you need, whenever you need it.

The sweetness in the batter comes primarily from raw honey, which also adds a delicious caramel flavour to the cake, but we also like to use a teaspoon of vanilla sugar for the aroma.

Don’t be tempted to sub out the muscovado sugar for white sugar. Walnut and coffee both love deep, caramel flavours, which muscovado provides in spades.

Calling our coffee and cashew cream a ‘buttercream’ is not strictly accurate as it doesn’t contain any butter. However, you can achieve a similarly light, whipped texture without dairy.

The key to the texture is cashew nuts, which are first soaked and then blended in a food processor. If you have not tried this before, be prepared to witness some culinary sorcery. With hardly any effort at all, the cashew nuts blend into a silky smooth cashew cream with a subtly sweet flavour and light texture.

Flavour your cashew cream with espresso coffee, which is stronger than normal roasts and imparts more flavour to the ‘buttercream’. Don’t worry about it being too strong, as the cashew cream will soften the flavour, much like adding milk to coffee.

If the mixture looks too thin, you can thicken it up again with a little more icing sugar until it spreads easily over the cake.

The traditional decoration for a coffee and walnut cake is to stud the circumference with walnut halves. However, this isn’t a traditional recipe, so you can throw the rule book out of the window if you so choose.

A sprinkling of chopped walnuts is both easy and elegant, and feels slightly more modern. Alternatively, you could dust with a little cacao powder (inspired by the chocolate powder on a cappuccino) or even finish with a little more grated orange zest.

Serve with strong black coffee mid-morning, or cosy up with a thick slice and a milky cappuccino in the afternoon. It’s also an elegant cake to serve when having friends over for a chat – just don’t expect there to be any leftovers!