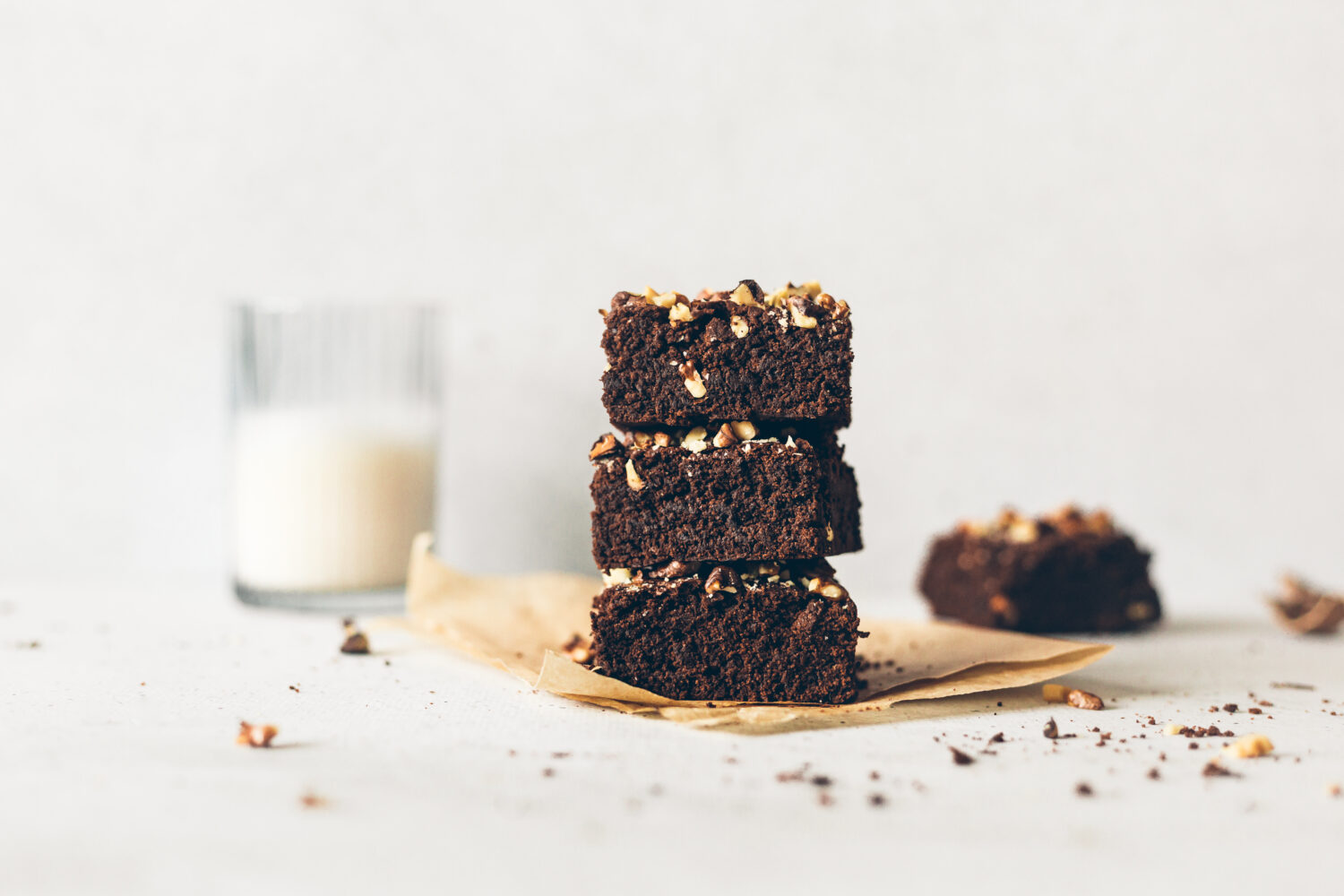 Our walnut brownie recipe is full of rich chocolate flavour with chopped walnuts for texture and crunch. Enjoy them as an afternoon snack with a cup of tea, or pack one up in your lunchbox for a workday treat.

While the exact origin of this most indulgent of snack cakes remains something of a mystery, there are some fascinating theories surrounding it.

It’s generally agreed that the brownie was born in the United States, but some have traced it further to Chicago. In fact, they have followed it right back to one particular hotel.

The Palmer House Hotel lays claim to the first ever brownie. Made with crushed walnuts and an apricot glaze, the hotel still makes their brownies to the very same recipe today.

Legend has it that in 1893 the hotel owner’s wife, Bertha Palmer, asked the hotel’s pastry chef to come up with a tasty, snack-sized treat that could fit in a lunchbox.

Her plan was to include one in the boxed lunches of the guests who were planning to attend the World’s Columbian Exposition, a fair dedicated to Christopher Columbus.

At her behest, the pastry chef created a chocolate-flavoured sheet cake which could be sliced up, ready for the ladies’ lunchboxes.

That said, there are plenty of other explanations for where brownies came from which are equally appealing.

While slightly less grand than the Palmer House hotel story, they appeal to us as home bakers.

One story has it that a housewife in Maine was in the midst of making a chocolate cake when she realised she had run out of baking powder. With nothing to leaven the cake, she simply slung it in the oven and hoped for the best (a sentiment which resonates with us).

Out came the cake; flat, fudgy and delicious. The brownie was born.

Other stories include a chef who accidentally poured melted chocolate into biscuit dough and improvised, and a home chef who ran out of flour.

In any case, we rather like the stories which attribute the brownie’s invention to a happy accident. This, we believe, is the origin of many culinary triumphs! 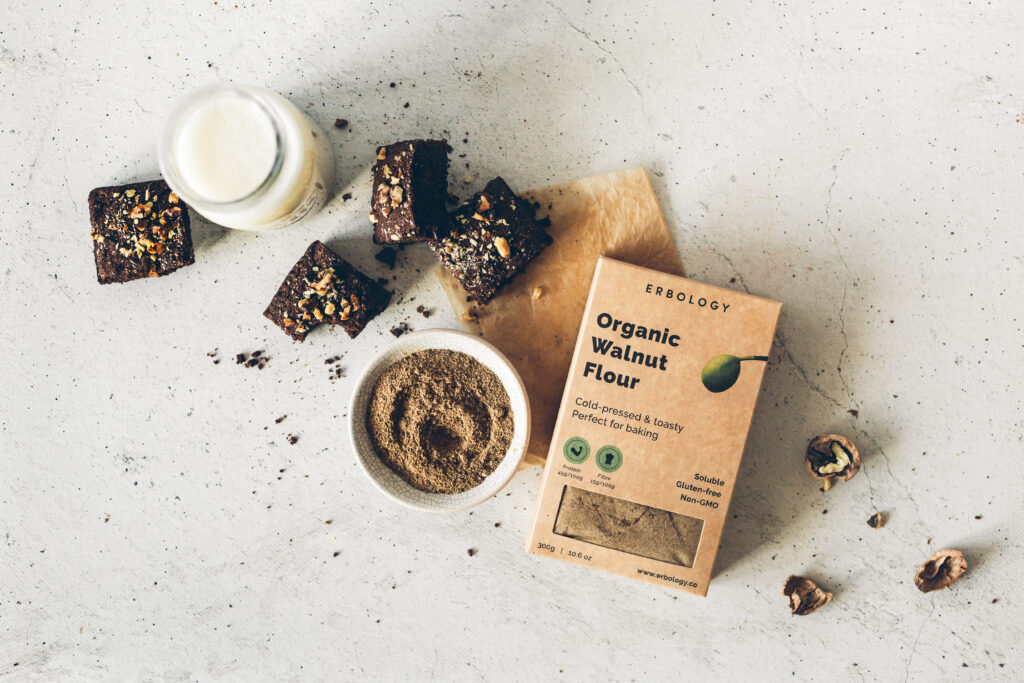 The style of a brownie

Brownies have come a long way since 1893. Now, you can find them in every corner coffee shop, restaurant and bakery. Their popularity seems only to increase.

Our desire to create ever more extravagant variations has produced a few different schools of thought on the brownie.

One camp believes that a brownie should like somewhere between an under-baked cake and chocolate fudge; others prefer a lighter, fluffier consistency more similar to a sponge cake.

Some like to add milk, dark or white chocolate chips for added, molten decadence.

Our walnut brownie recipe takes the lead of the original Palmer House recipe. It’s light enough to qualify as a cake, while retaining a hint of fudginess.

Like the Palmer House, we think that toasty walnuts are the perfect partner for rich, dark chocolate. They provide a crunch which prevents the brownie from becoming too homogenous, and crisp up deliciously in a hot oven.

The Palmer House’s apricot glaze seems to have somewhat fallen by the wayside when it comes to brownie making. Curiously, though, it is a key ingredient in another famous chocolate cake: the Austrian Sacher torte.

The Sacher predates the brownie by around 50 years, so perhaps the inspiration for the glaze came from Vienna! 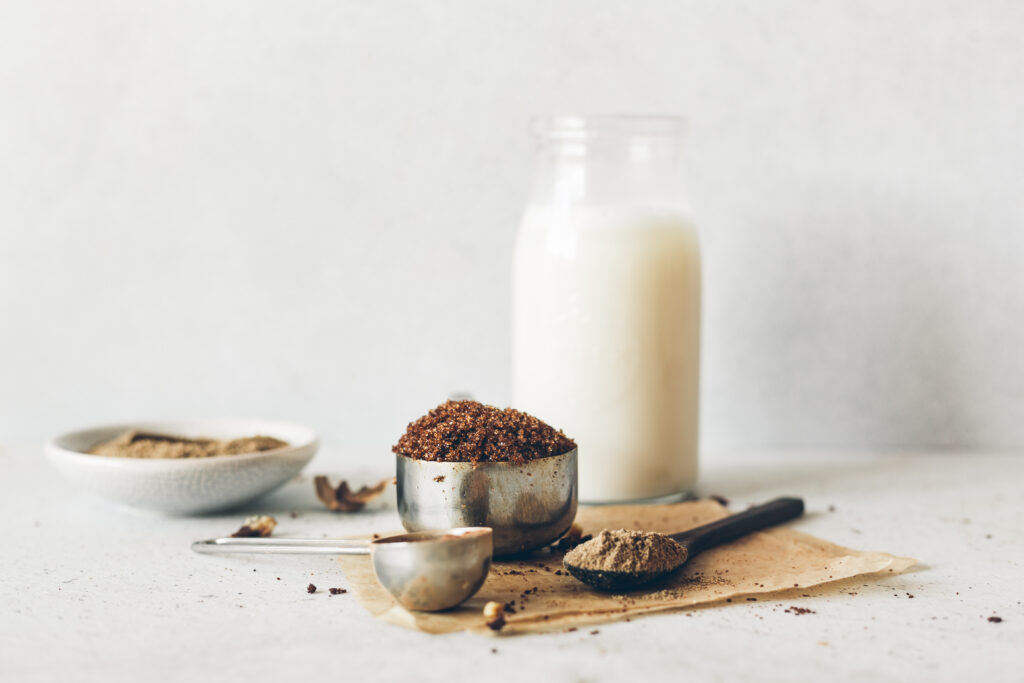 The secret of the walnut

As walnuts are the star of the show here, we recommend sourcing high quality nuts.

While you can grab a bag of walnuts at most supermarkets and groceries, there is a huge difference in quality out there.

There are two things to look out for when sourcing really good walnuts. The first is an organic certification, which will tell you that no pesticides or chemicals have been used to grow the walnuts.

The second is to look for the words ‘small batch’ on the label.

Because nuts are such a popular commodity, a lot of suppliers buy them in enormous bulk to save on costs. Unfortunately, the nuts then have to be stored in warehouses for months until they are bought. Walnuts, in particular, have a very high oil content and they are really prone to spoilage if they are stored incorrectly, or over a long period of time.

Small batch producers, on the other hand, only shell their nuts in small quantities. This helps to stop the oils drying out or going rancid, and makes sure the nuts reach you with all their flavour and nutrients intact.

There are a few ways to enjoy a brownie, depending on the level of decadence you are looking for.

The simplest way is to brew up a fresh coffee or a cup of tea and enjoy your brownie alongside. We strongly recommend warming it to help it reach its full, comforting potential.

Our favourite way, though, is to eat the brownie as a dessert. Serve it hot, and topped with a scoop of vanilla ice cream. Sprinkle with more chopped walnuts, if you like, and a drizzle of dark chocolate sauce. Divine.