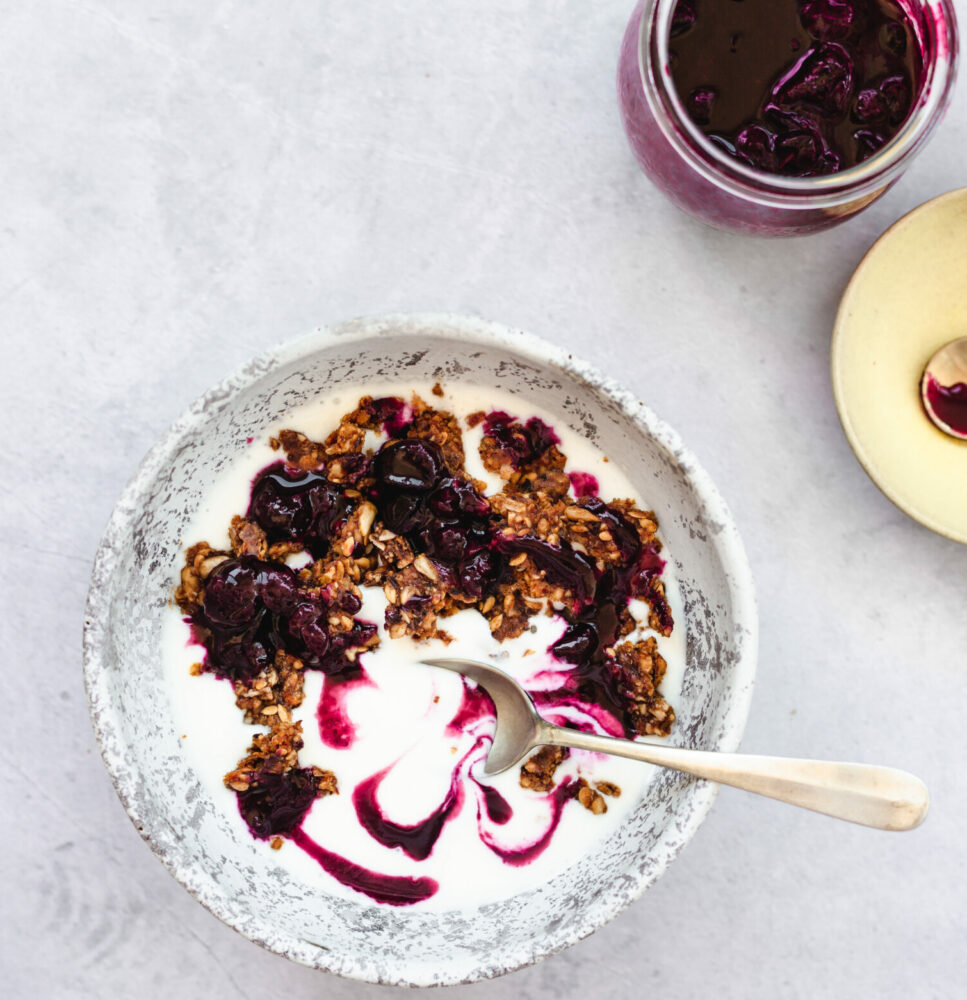 Looking for something new to shake up your breakfast routine? Try our quick and easy blueberry compote recipe. It’s the perfect way to top your toast, desserts and breakfast bowls, and goes particularly well with our easy yogurt and granola bowl.

A staple of smoothies, breakfasts, puddings and jams, blueberries must be at the top of the nation’s favorite fruits.

North America produces almost 90% of the world’s blueberries, harvesting an incredible 564.4 million pounds of them in 2012!(1)

The roots of the North American love for blueberries run deep. They were very important to Native Americans, who called them ‘star berries’. Why? If you look closely at a blueberry, you will see the area where the blossom formed before falling off. It has five points, like a little star.

They also believed that the ‘great spirit’ created blueberries to provide food for their children during periods of famine.

Native Americans also used blueberries in pemmican, which is a high energy food made from dried meat and fat. Sometimes hailed as the ultimate survival food, pemmican would be used by traders spending time in the cold prairie regions of the north, where food was scarce.(2)

As delicious as it sounds, we’re quite pleased that nowadays we can enjoy blueberries in fresh or compote form! 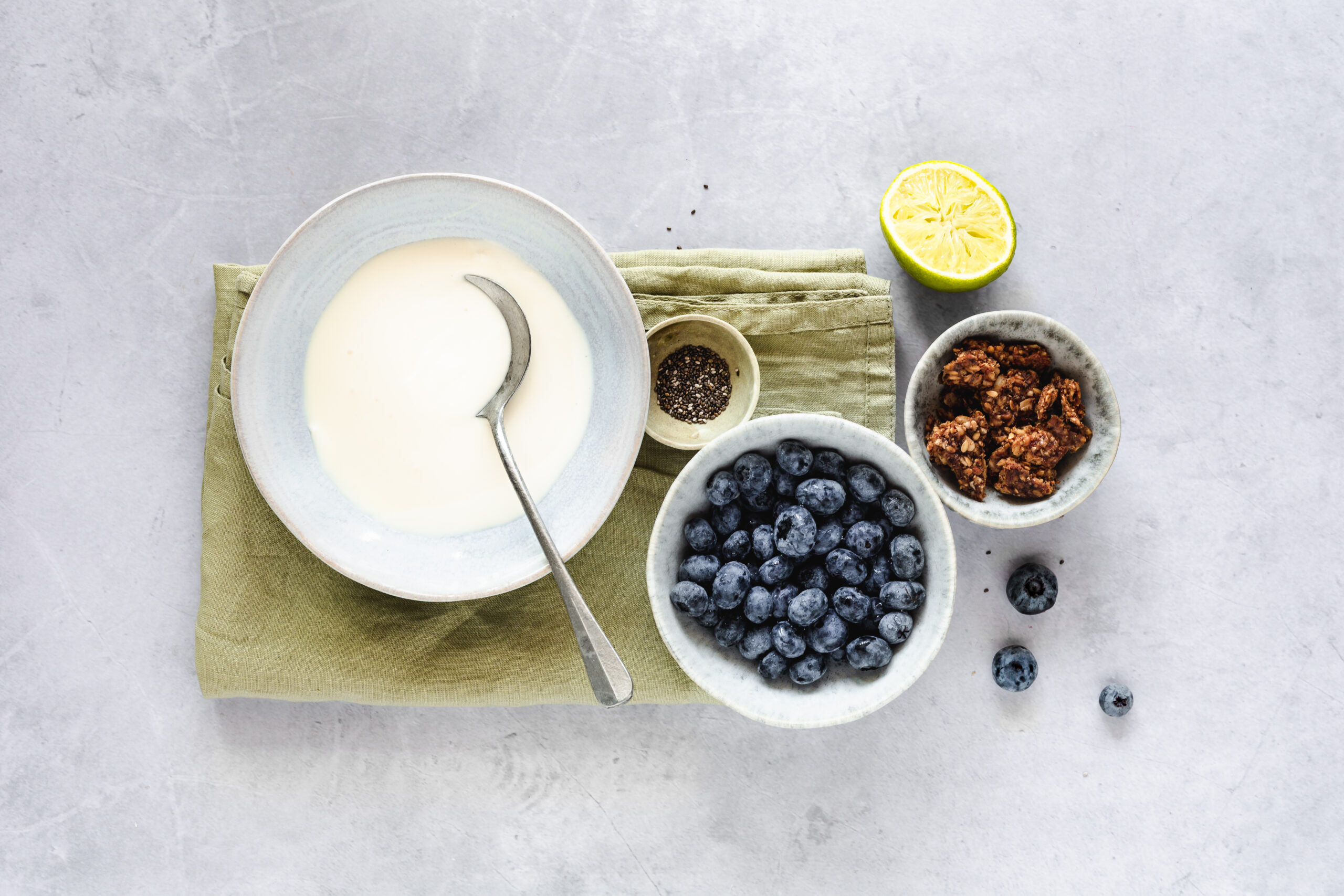 In the more health-conscious days of dieting trends and fitness fanatics, blueberries have found a new place in our hearts.

They’re well-known to be full of healthy nutrients, and many health gurus tout them as a superfood.

It’s certainly true that they have lots to offer from a health perspective. Studies have found that a regular, moderate consumption of blueberries may reduce the risk of cardiovascular disease, death and type 2 diabetes. They may also help with managing a healthy weight, and have protective effects for our brains.(3)

Pretty astonishing for a little berry!

A lot of the interest around blueberries as a health food centres around certain compounds they contain, called anthocyanins.

Anthocyanins are pigments and they are responsible for the lovely blue-purple color of blueberries (and their impressive capacity to stain everything they touch).

However, anthocyanins are also antioxidants. This means they can help fight the damage caused in the body by free radicals. If left untamed, free radicals can cause cell damage and ageing, as well as being implicated in a host of diseases.

Other fruits and vegetables contain anthocyanins too. Unsurprisingly, they’re often purple, so it’s easy to spot them! These include aubergines, aronia berries, blackcurrants and blackberries. However, cranberries and cherries also contain them. 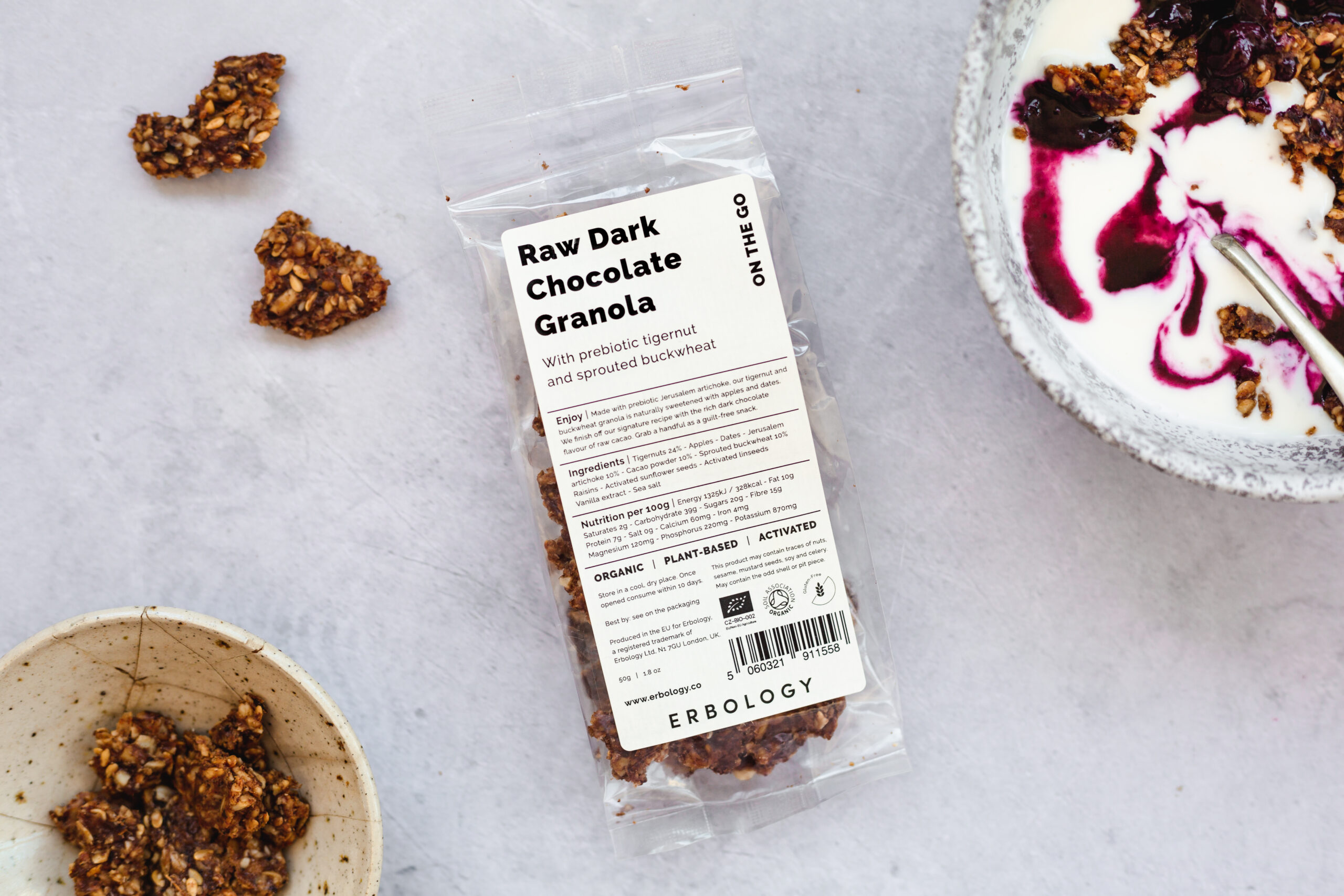 There are two myths surrounding compotes that need to be busted. The first is that they’re very difficult to make, and the second is that they have to contain a lot of sugar. Both wrong, lucky for us!

Our blueberry compote can be made in a flash and replaces sugar with stevia extract.

If you haven’t used it before, stevia is a sweetener made from the leaves a type of plant called Stevia rebaudiana. It’s actually a member of the chrysanthemum family (although rather different from the ones in your garden).

It grows predominantly in Brazil and Paraguay, and has attracted attention because you can use it to make a very sweet sugar substitute. It’s also ‘non-nutritive’, which means that it (virtually) doesn’t contribute any calories to your diet.

Stevia can be a good option if you’re avoiding sugar for weight management reasons. However you could also use a bit of honey or maple syrup to sweeten up your compote, if you prefer.

You’ll simply cook your berries down with the sweetener and a squeeze of fresh lime to really bring out the flavor of the berries. The whole blueberry compote recipe can be done in under five minutes, and no refined sugar is required. Compote myths: busted! 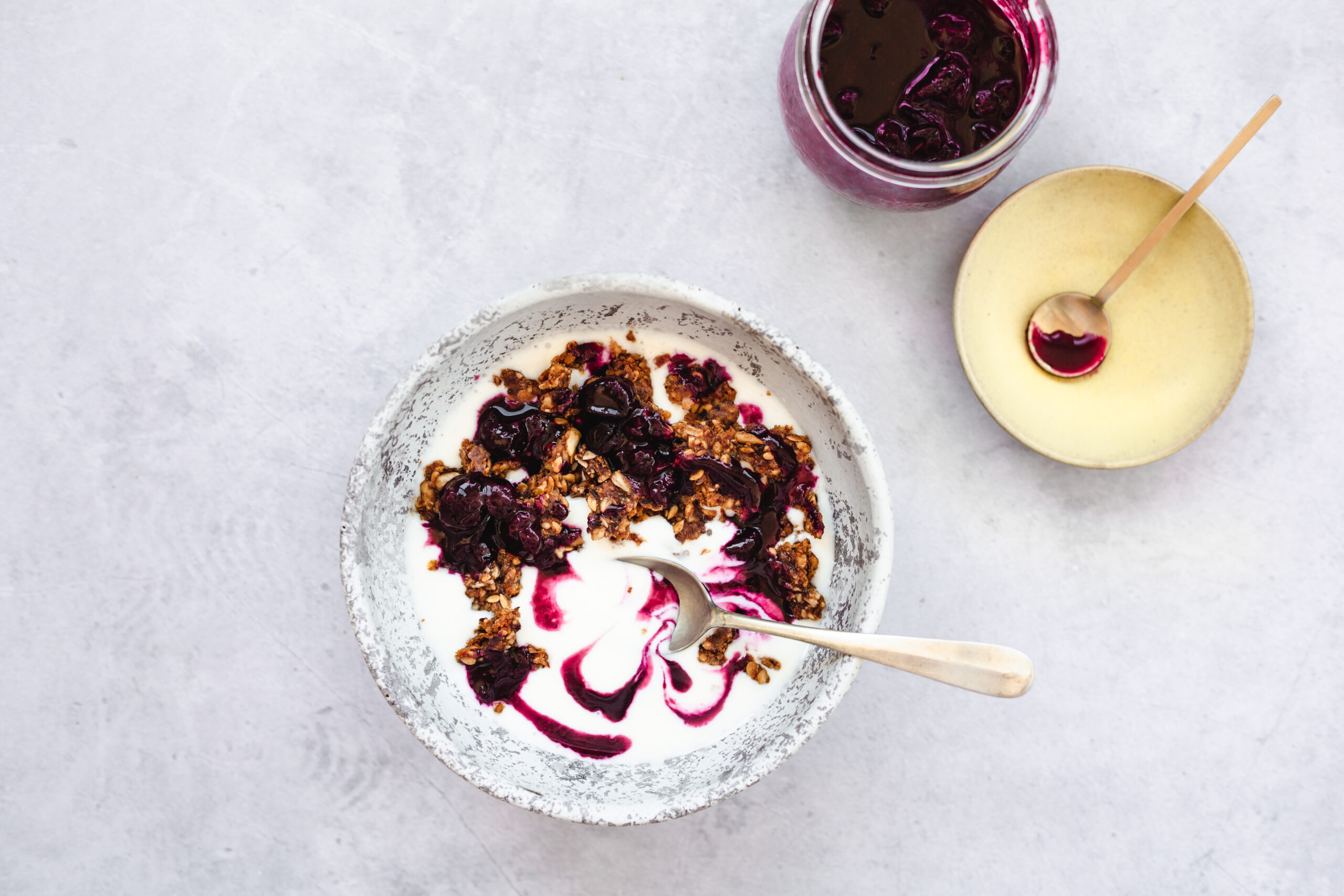 We’ve said it before, and we’ll say it again. If there’s any way we can incorporate chocolate into our breakfast (in a healthy way), we’ll do it!

Hence why we love our Organic Dark Chocolate Granola as the finishing touch to this easy yogurt bowl.

Our granola isn’t made from oats and honey, like some others. Instead, we start with a base of sprouted buckwheat and tiger nut. Both of these are prebiotics, meaning they nourish the beneficial bacteria in your gut.

(Extra bonus points if you choose a ‘live’ yogurt for your bowl. This means it contains live strains of bacteria which bolster your gut microbiome. What a gut-friendly breakfast!)

Once again, our granola doesn’t require any refined sugar as we use dried fruit such as apple and raisins to sweeten it instead. However, it does deliver on the rich, chocolaty flavor thanks to the inclusion of organic raw cacao.

Scatter a handful of it over your breakfast bowl and luxuriate in chocolaty indulgence while caring for your gut at the same time. Sounds like a very good morning indeed!

For the yogurt bowl

For the yogurt bowl