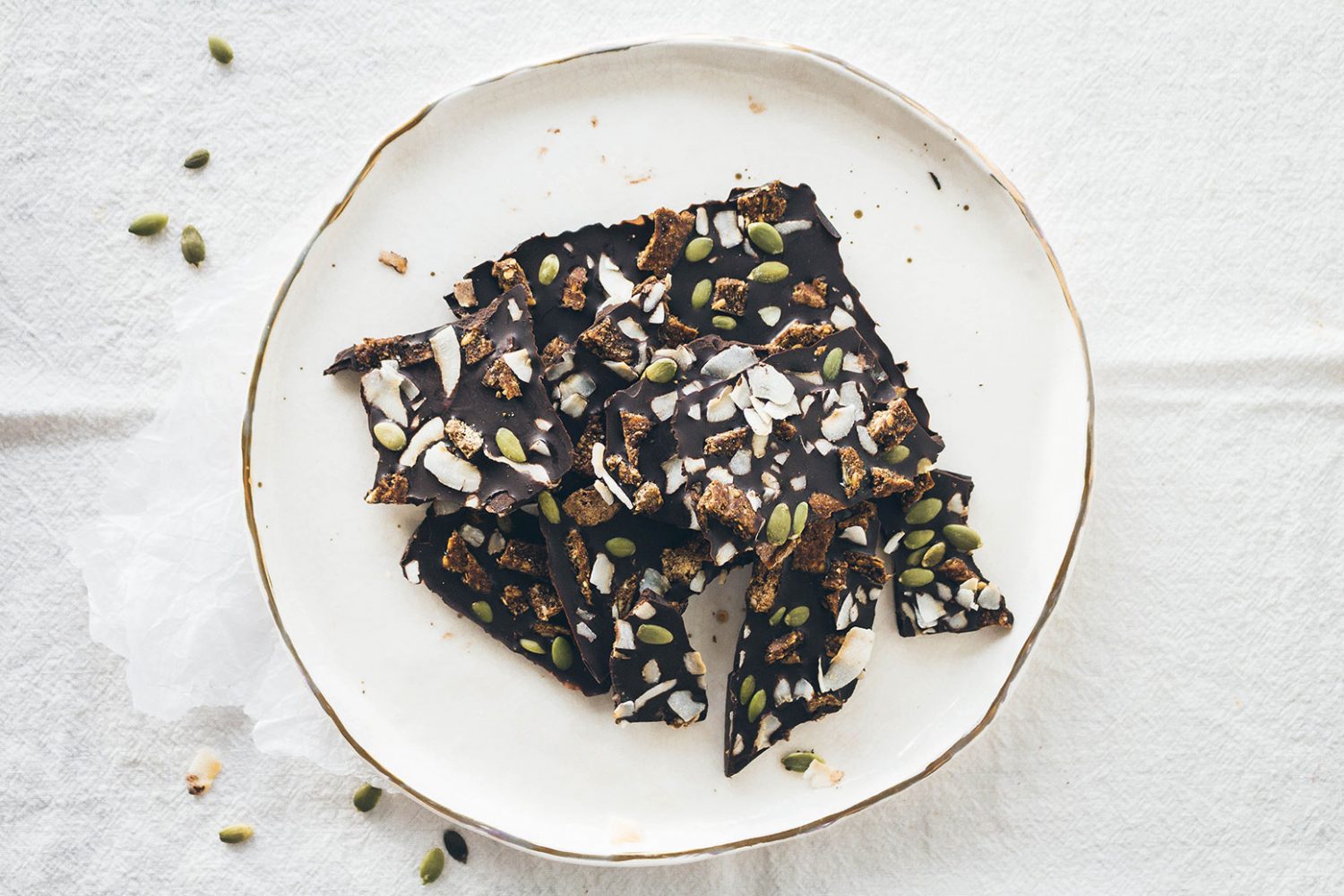 Pure and simple: dark chocolate is irresistible. The rich cacao combined with the silkiness of cacao butter is to die for – although we’d much prefer to live for it!

Chocolate is even better when it is not a guilty pleasure. In this recipe, the granola provides a good strong dose of high quality fiber and is packed with nutrition including magnesium, B vitamins and iron, while the pumpkin seeds serve up a protein-packed punch. Our bar is just as good for your digestive system as it is for your taste buds. 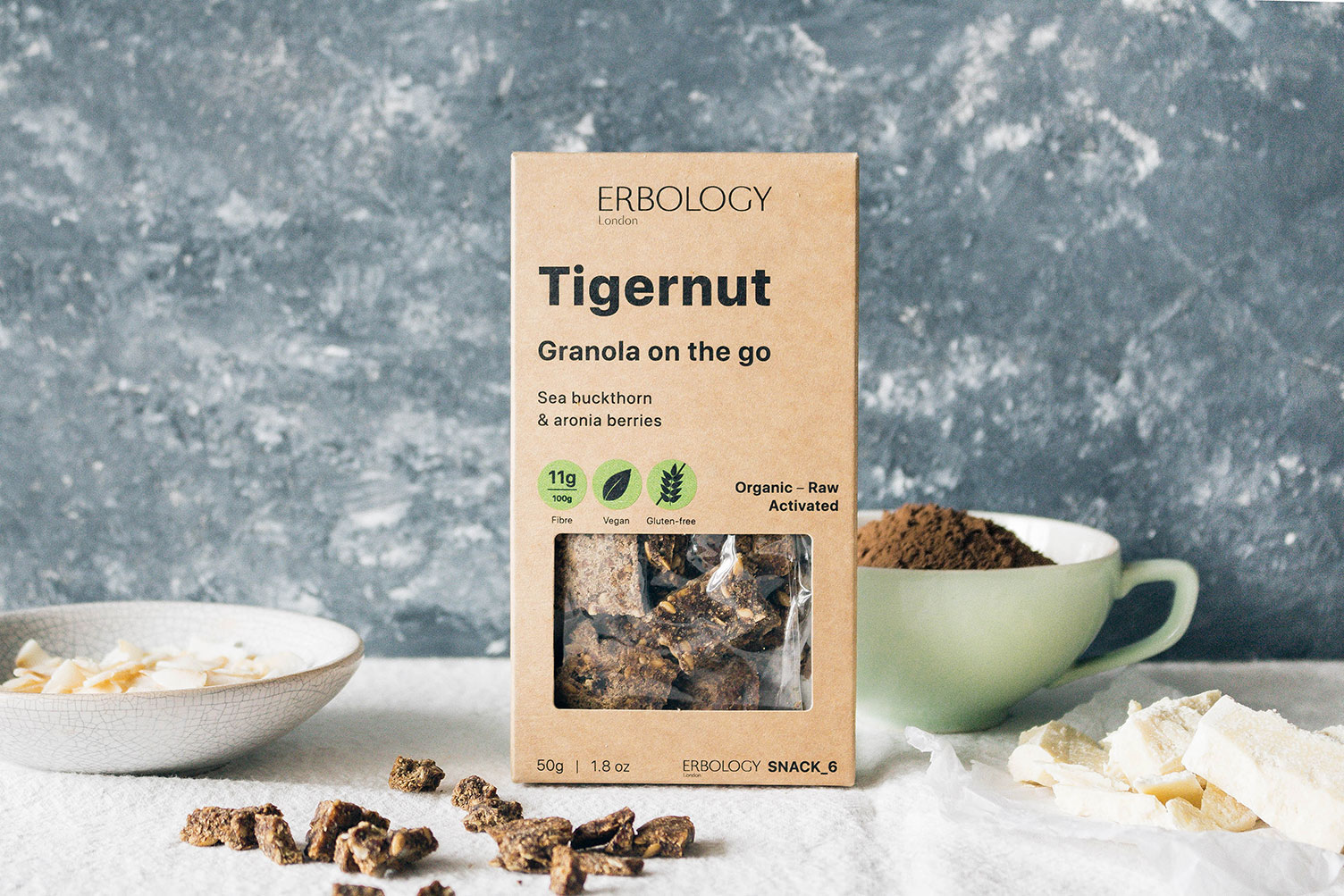 Be sure to search out unsweetened coconut flakes. Interesting observation, yet to be interpreted definitively by food scientists: in the South Pacific, where various forms of coconut can make up more than half of the calories taken in daily, the rates of heart disease are significantly lower than in the United States and Europe. 100 grams of unsweetened dried coconut supplies 88% of the recommended daily intake of copper, and it is also a source of manganese, phosphorus, selenium, and zinc, among other minerals.(1) 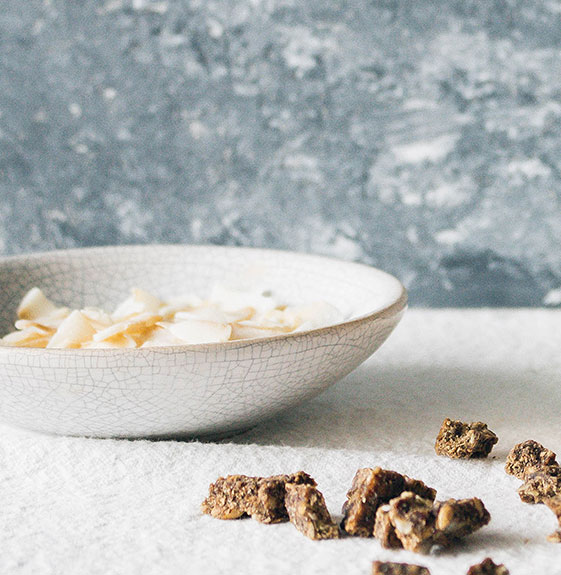 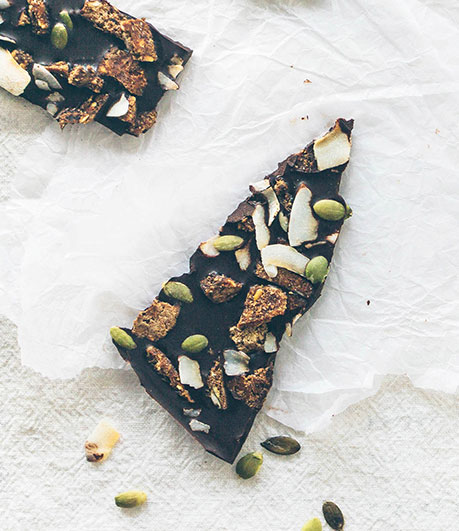 We rarely need an excuse to eat chocolate, but if you are not familiar with how beneficial raw dark chocolate can be, you’re in for a surprise. It also makes you think about how much we have been conditioned to see the heavily processed, sugar-filled milk chocolate that we are marketed as what chocolate is supposed to be.

Did you know that raw dark chocolate is more effective against free radicals than any other fruit tested for ORAC, or oxygen radical absorbance capacity? Although ORAC is measured in a test tube and may differ than how food actually acts within the human body, the results are still intriguing. Cacao is more powerful in this way than açai, blueberries, or other fruits marketed as superfoods. It also contains far more polyphenols; the polyphenols found in cacao are highly protective of cardiovascular activity.(2)(3)

Another intriguing benefit of dark chocolate is its apparent ability to make the skin more tolerant of the harmful effects of the sun. A study showed that the minimum amount of UVB rays that caused sunburn in subjects doubled after eating dark chocolate for three months!(4)

However, our favorite possible health benefit of dark chocolate? A study showed that it may help blood flow to the brain.(5) The next time we turn to a few intense squares of dark chocolate after a hard day, that one is the justification we’ll turn to….

Most importantly – chocolate is heaven, and most of us on Earth can use the occasional bite of heaven, especially when it’s all starred up with sea buckthorn, aronia berries, pumpkin seeds, and coconut flakes. That’s why the ingredients for this raw chocolate bar head our shopping list, and will stay right up there for a good long while. Live for chocolate, rather than die for chocolate, indeed…